This week back to normal after missing last week. I didn't pick up the camera the other week all week so no shots to share and a busy mid week here as well, more on that later. But for now I'll run thought some of my shots from last weekend. As usual I went out to the Australian Botanical Gardens, this time in the afternoon as we had booked on a guided ranger tour of the Dharawal national park, The walk and talk are good but no great photos out of the walk, but a good place to go for another day and close to home as well only 30 minutes drive so somewhere to go back to later.

In the afternoon I headed out to the gardens as usual but being later in the afternoon of a warm day not to much activity about, but still managed to find a few decent shots, not to many thou.

First up is the usual Eastern Yellow Robin (Eopsaltria australis) these little fellas are all around the gardens and are often seen hanging off the sides of trees studying the ground looking for insects to pounce on. 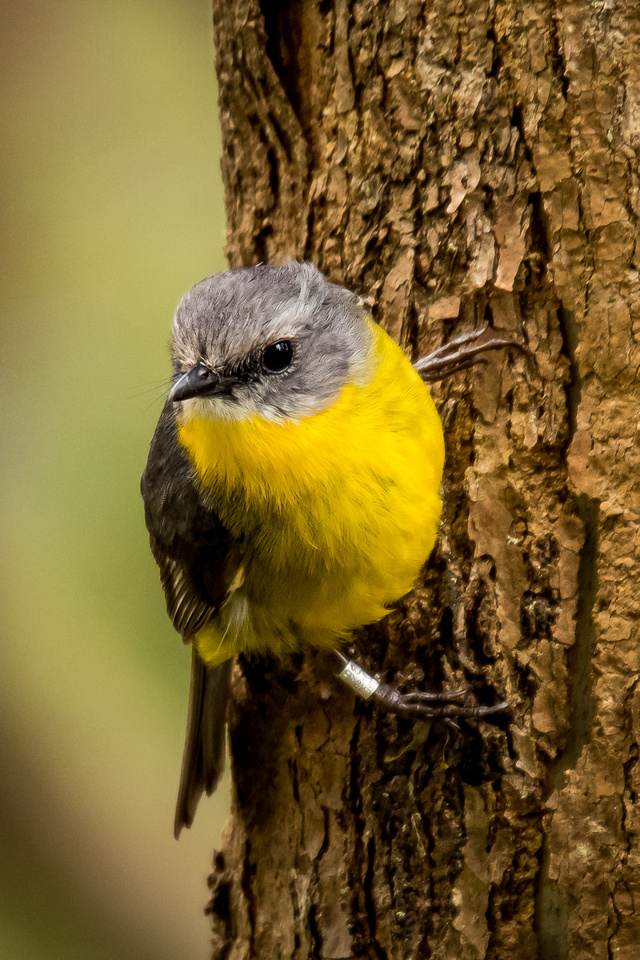 There was a fair bit of rain about through out the week so Thought I'd find quite a few mushrooms this week, however I only found the one this week. Though with time a little short I didn't centre up to the Wollemi area this week. The rest of this week is also suppose to be wet so maybe next weekend I'll have better luck. 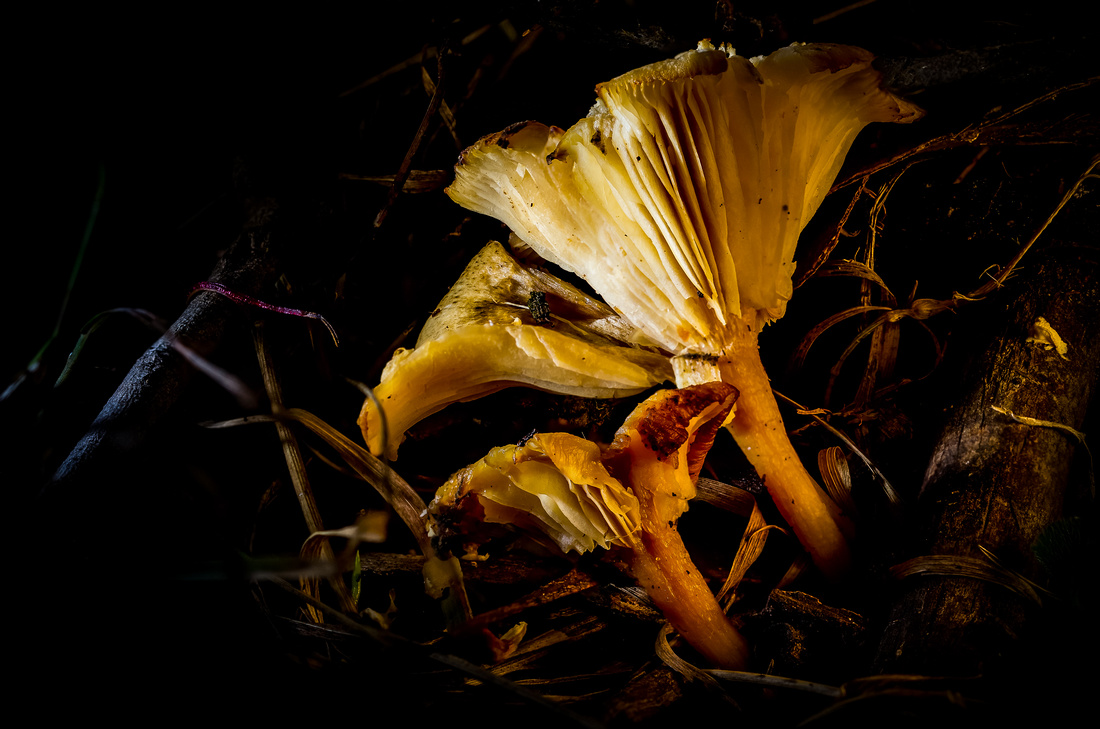 Around the plant bank there was a fairly large noise going on and I eventually tracked it down to this one an Olive-backed Oriole. I managed a series of shots before he took off, this was the best I managed today of this one, happy with this shot. 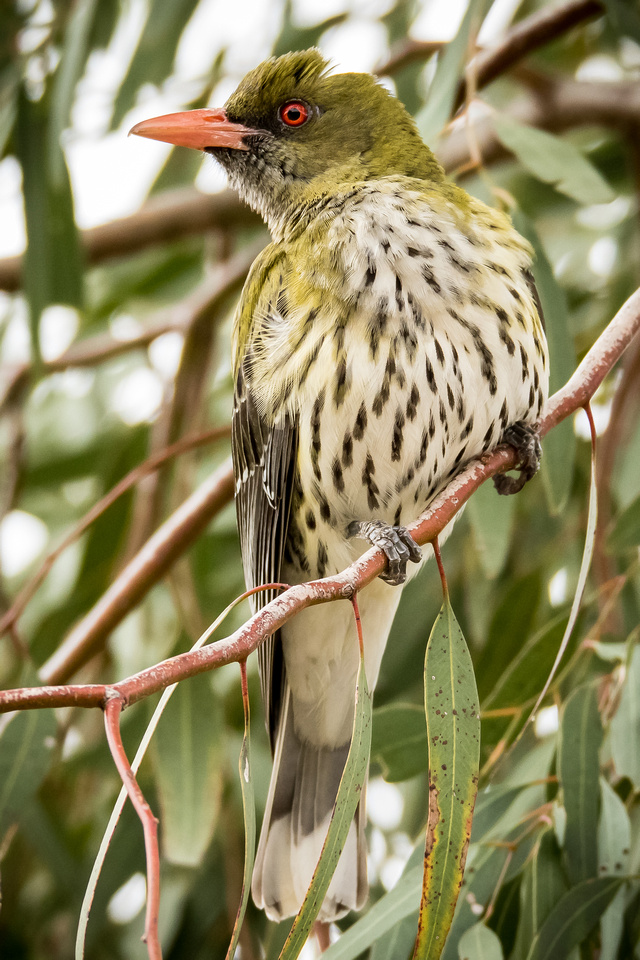 Coming back for the plant bank and back on to the board walk. I heard a noise in the trees and and found this Nankeen Night-Heron (Nycticorax caledonicus) First time I've seen one of these in the gardens, I know they have them there at terms from there bird list, but I've never been able to find one, I managed to get this shot which is far from great before it took off and I could;t find it again. But I know where to start to look for it next time and we'll see If I can get a clearer shot next time. This time as I moved around to try and get a shot between the branches it took off, so not like the little robins this one doesn't like you to get anywhere near close.  This shot has way to many branches in the way, but its one of only three shots I have of this one so far. 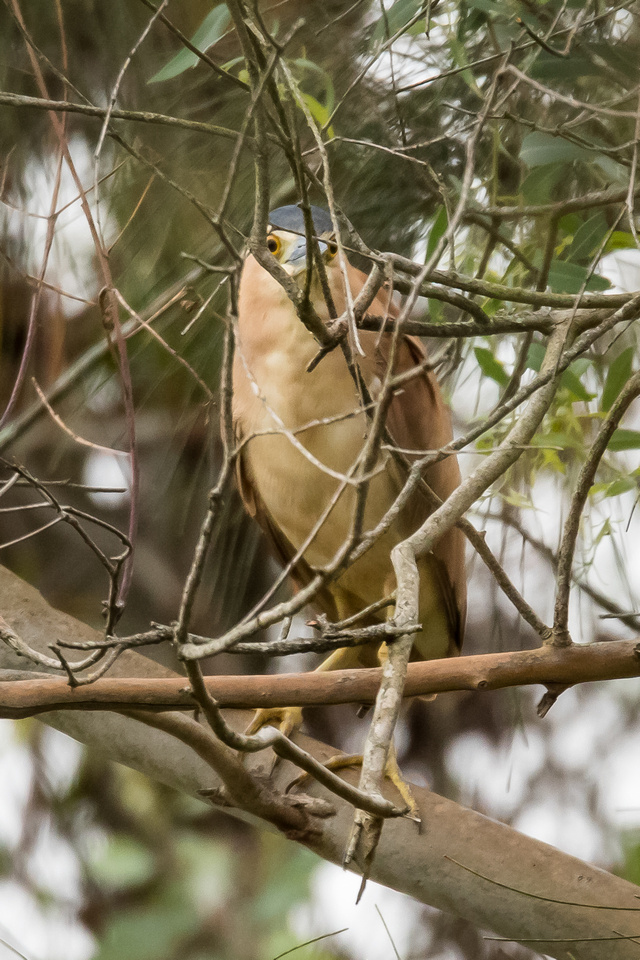 From there I drove up to the connections gardens to see what was up there and managed to get this shot of an Eastern Spinebill (Acanthorhynchus tenuirostris) These are probably the closest thing we have to a humming bird here in Australia Very fast and they don;t stay still for long. 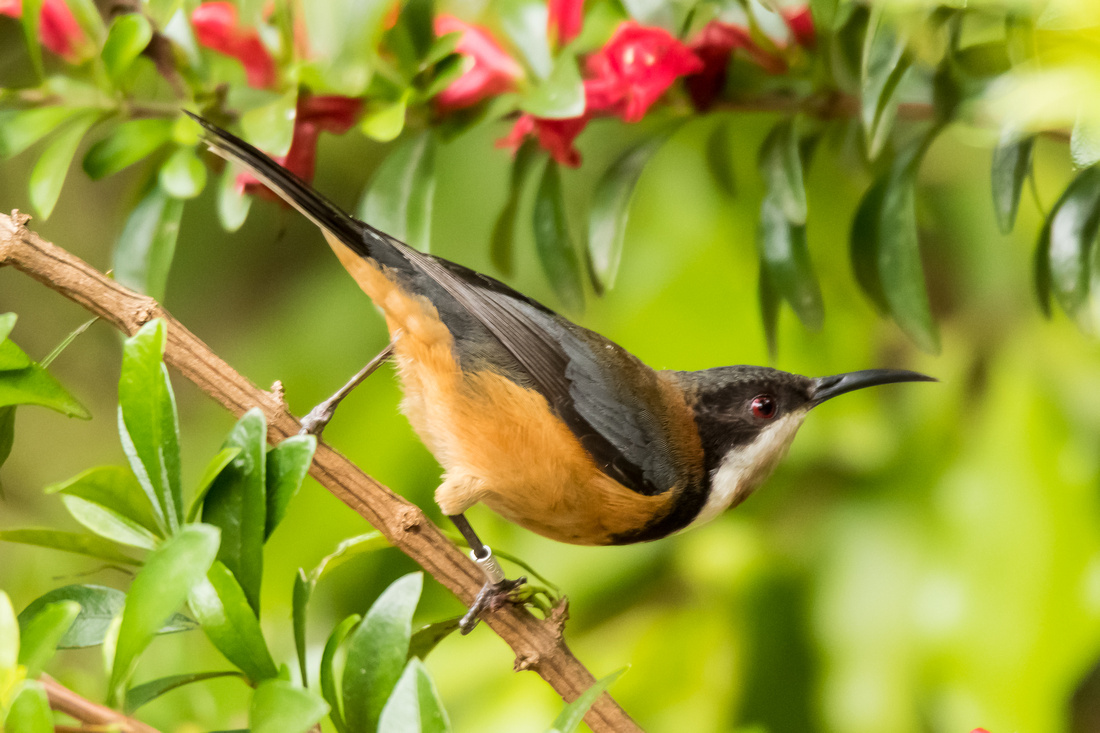 Lastly I walked down tot eh lakes to see if anything interesting was down there and a Magpie-lark (Grallina cyanoleuca) trying to chase off a much larger Channel-billed Cuckoo (Scythrops novaehollandiae) This much larger birds prefer to lay their eggs in the little Magpie-larks mud nests. Looking at the size different it would certainly have its work cut out if the Cuckoo succeeded. I'll keep an eye out as I think I know where the nest is. 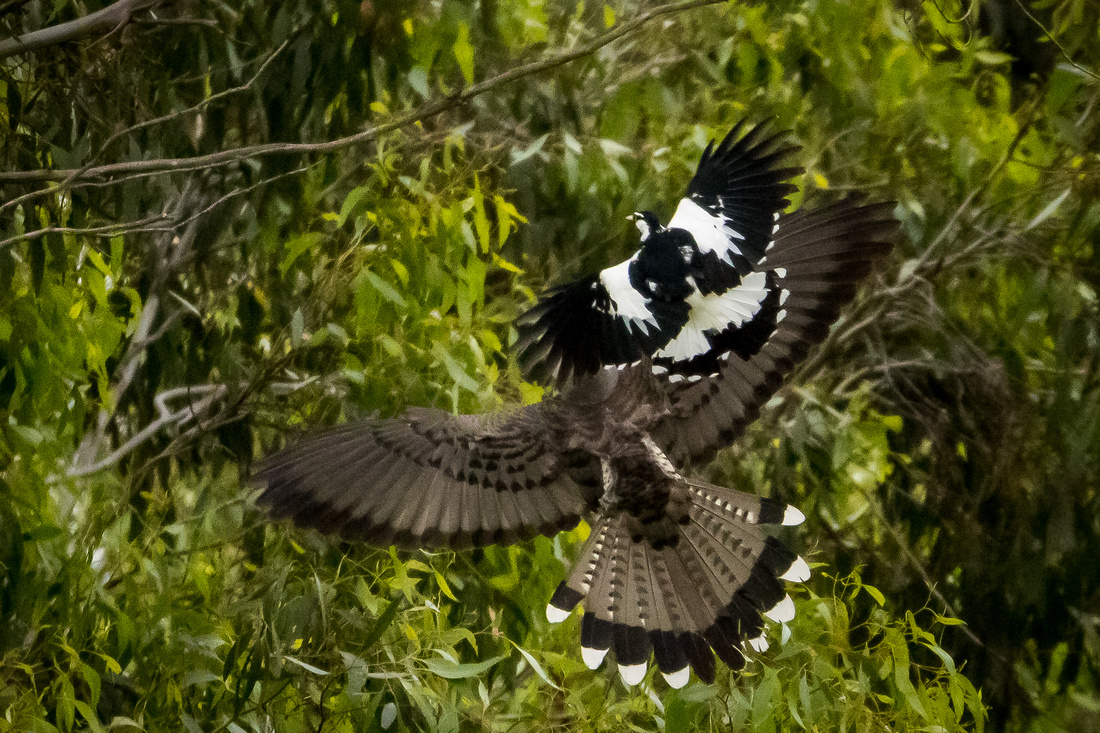 Another shot of the Channel-billed Cuckoo when it settled down for a few minutes. 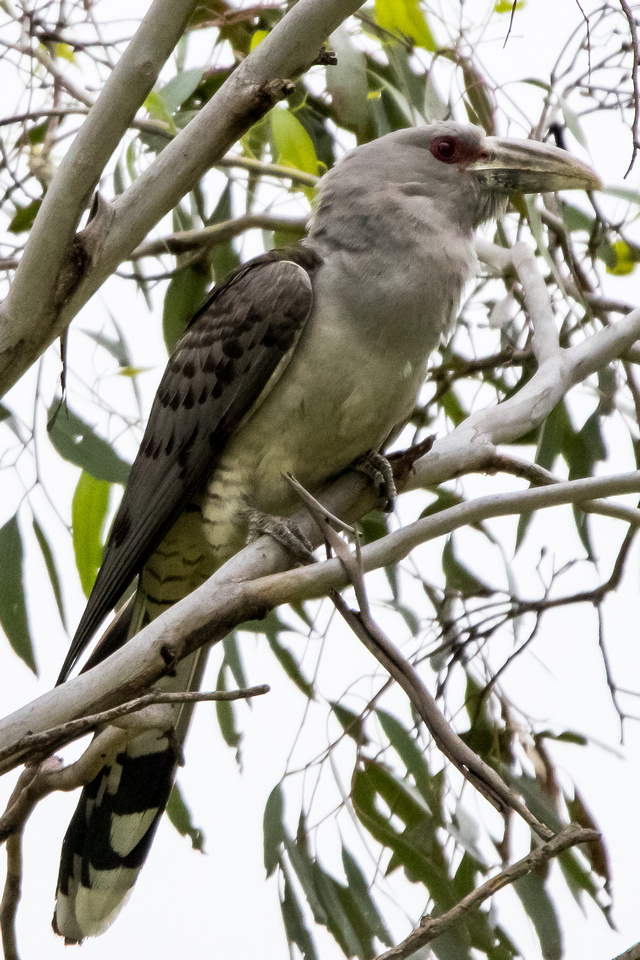 Thats it for the shots from this weeks walk around the gardens.

Some news here and the reason I was a little busy the week before was each year the Australian Botanical Gardens holds a photography competition where you can enter three shots per category and see how you go. This year there wasn't that many entries only about 81 from memory I entered a few shots in the Wildlife category a few in Macro which also included plants this year so not just macros and a couple in the landscape category. I the past I have won a few prises in this competition, its usually the only competition I enter. This year I managed to win the Wildlife category with the Brown hornbill shot, and one of my mushroom shots won the overall open division, so a good day out last Sunday in the gardens, Heres a couple of shots of me besides my some of my shots.

The first one I'm beside my white Waratah shot. 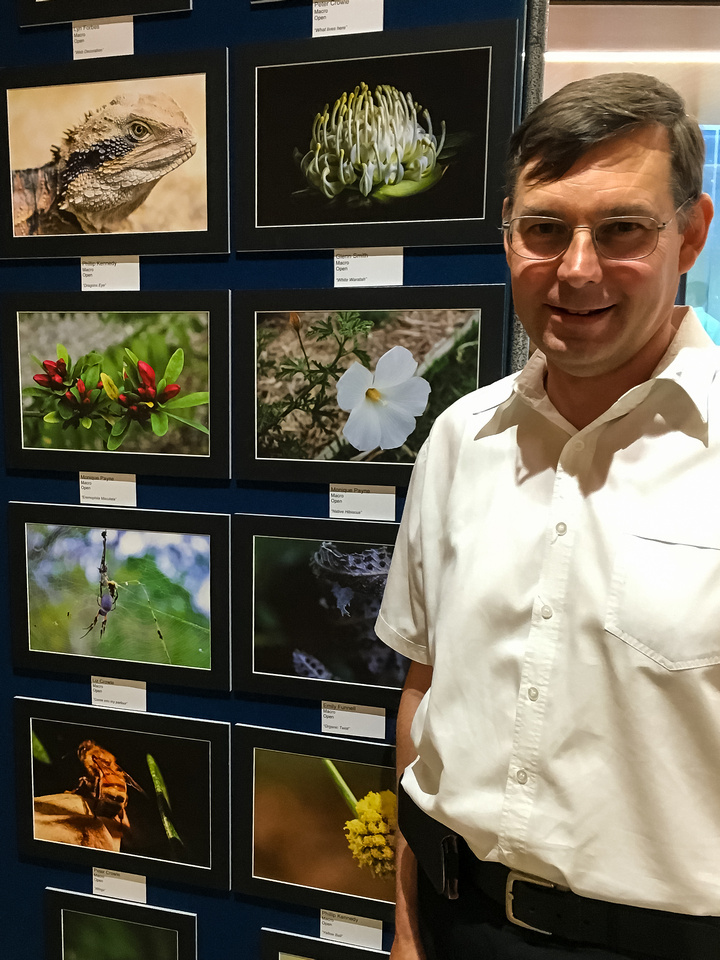 This one the top Mushroom shot was the winning shot and the mushroom shot in the middle is also mine. 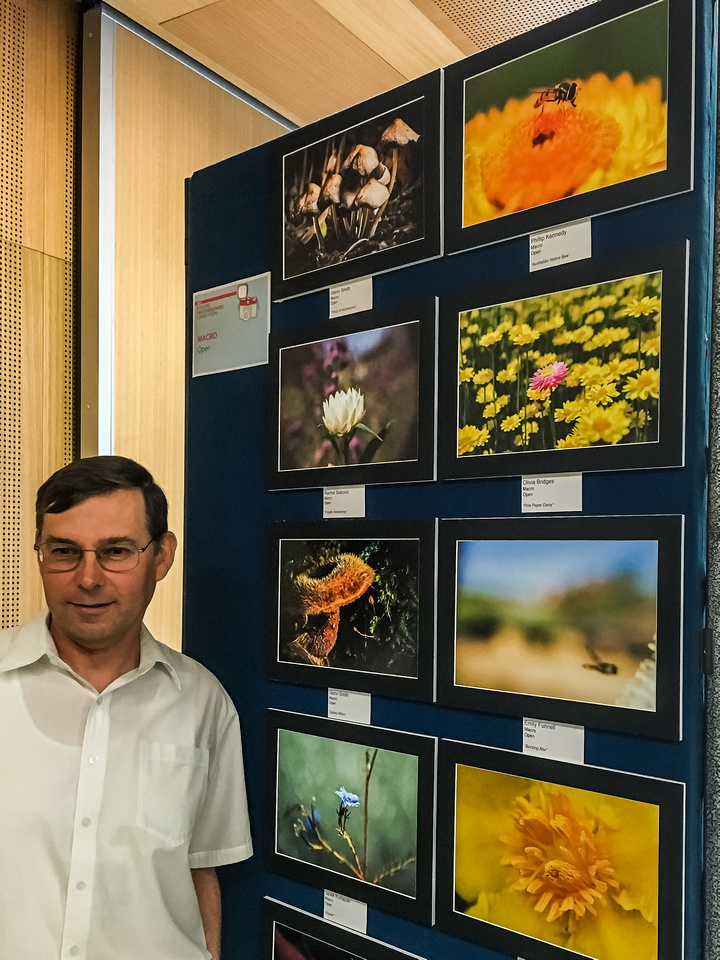 Lastly the Grebe with the reflection the Thornbill below it (The winning shot) and the mistletoe bird beside the Thornbill were all my shots in here. 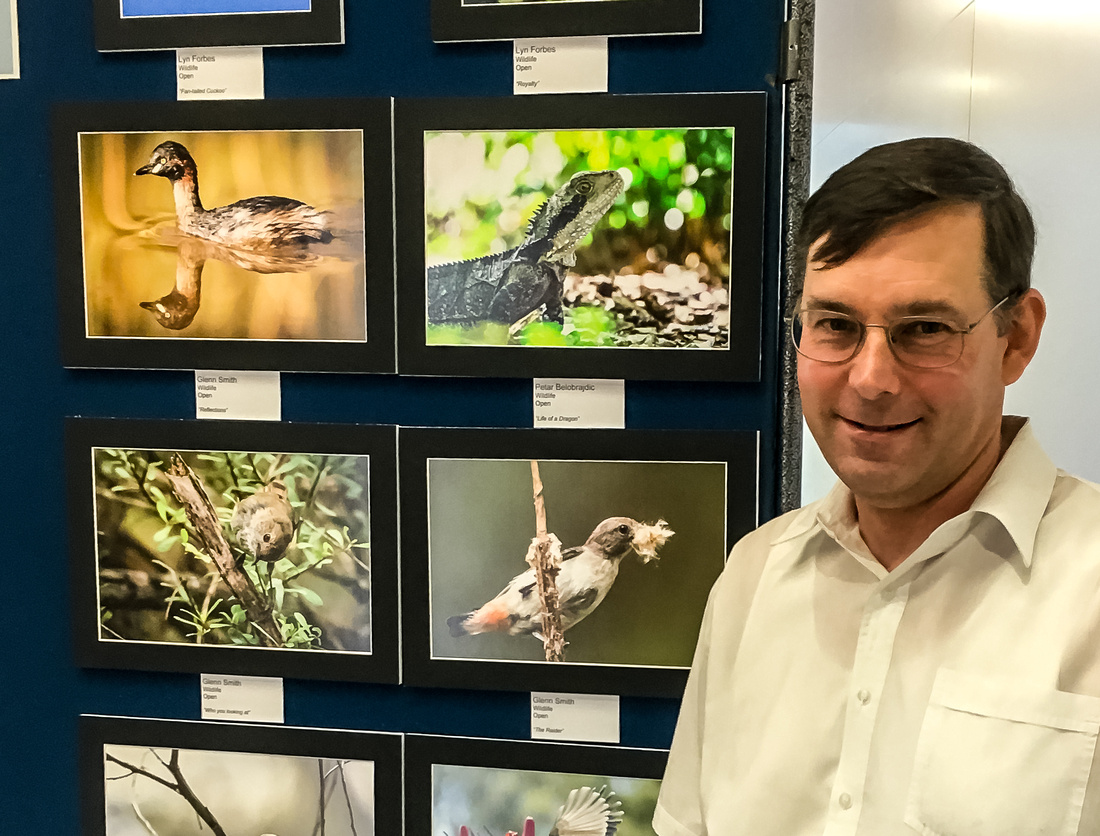 So that was a good day out for me.

The council also runs a photography competition and in the past I've never entered that one this year I thought I'd give that one a go as well, they limit you to only 5 entries in that competition. This year they got over 300 entries and the awards night was Wednesday night. I managed to win the Macro category for that one as well. So two competitions and a win in each so a good year here for my this year.

The local paper has also featured the winning shots on its macbook page and is currently using my mushroom shot as its banner shot.  So all up a good week for mushrooms last week even though I didn't actually pick up the camera here.