As I've done for the last few years, following on from Martin Bailey’s Podcast each year when he creates his top ten shots of the year, again I've done the same. This task each year doesn't get any easier and I can see the improvement in my work over the years reviewing the previous imaged compared to this year’s work.

This year I went on my first photography workshop / photo tour with Steve Parish in Central Australia, it was a great experience and some amazing landscapes out there. The only Landscape shot in my top ten came from this tour, there was so many images for the tour I would have liked to include but only ten images so only one for that trip may my top ten for the year. Again, this year Mushrooms and Bird shots made up the bulk of my shots this year and mainly in the Australian Botanical Gardens, Mount Annan. Which is only a few minutes’ drive from my place. In fact, only the Central Australian Landscape shot was the only one not taken in the Gardens.

This year along with Google plus which is still doing great with my mushroom collection now having 83000 plus followers, Where I post a mushroom shot each week. I've also started to post in Instagram now, something I kept clear of for some time, but it’s now starting to gain some traction. The Gardens have found my work on Instagram and have asked me to run a workshop in November which we've now done, my first workshop that I've run. Seemed to go OK from what I can tell and everyone said they learnt something from it. So, happy with that there should be more this year, So all up a good year for me Photography wise.

So on with the top ten shot, this first shot was the shot from the Steve Parish workshop photography tour in Central Australia. This shot is taken for a Helicopter, my first time up in one, the doors were removed to enable a cleaner shot and certainly happy with what I got out for that. I've had printed two of the shots from this flight at 1 metre long. This one is my current favourite, the other one has the most amazing geological shape but I like this image better. 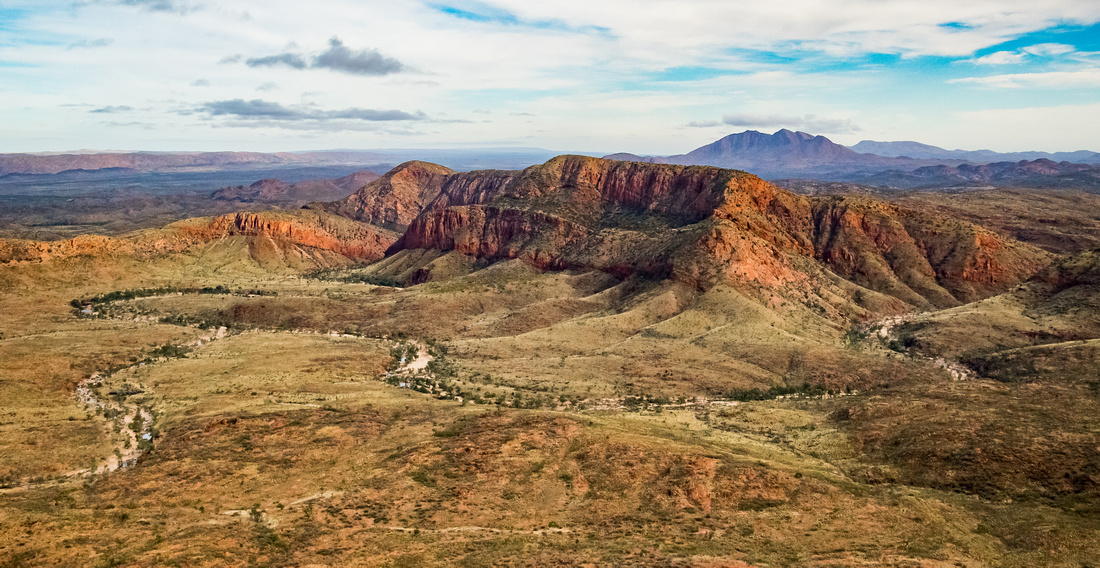 Again a lot of the shots this year was of mushrooms in the Australian Botanical gardens and this shows the spores falling, little golden dots under the cap you can see them on the left side more easily then you can pick them up on the right once you know what your looking for. I used two off camera speedlites and the second light was behind to give back light which lit up the spores. 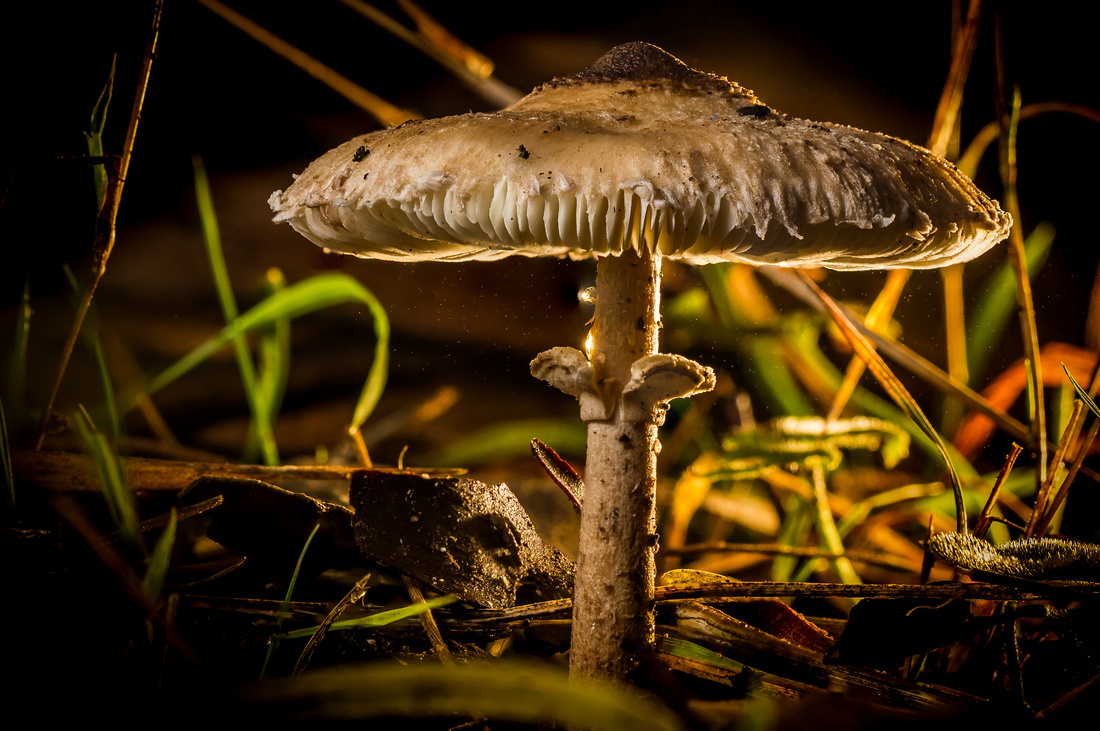 The next shot was a lucky shot, well planned but lucky, I was shooting a mushroom on the ground but had set the bird camera (Canon 7DmkII with Sigma 150-600 Sports Len) to focus on this dead tree stump hoping something may come along as it’s a favourite perch for a lot of birdlife, so as I was taking a focus stack of a mushroom this Golden Whistler (Pachycephala pectoralis) landed on the stump which was only about 4 metres away, so I slowly got up to take this shot, I managed about six shots this being the better of the six. Happy with all the detail in this shot. Really liking the 7dMkII and Sigma 150 to 600 Sports lens combination. 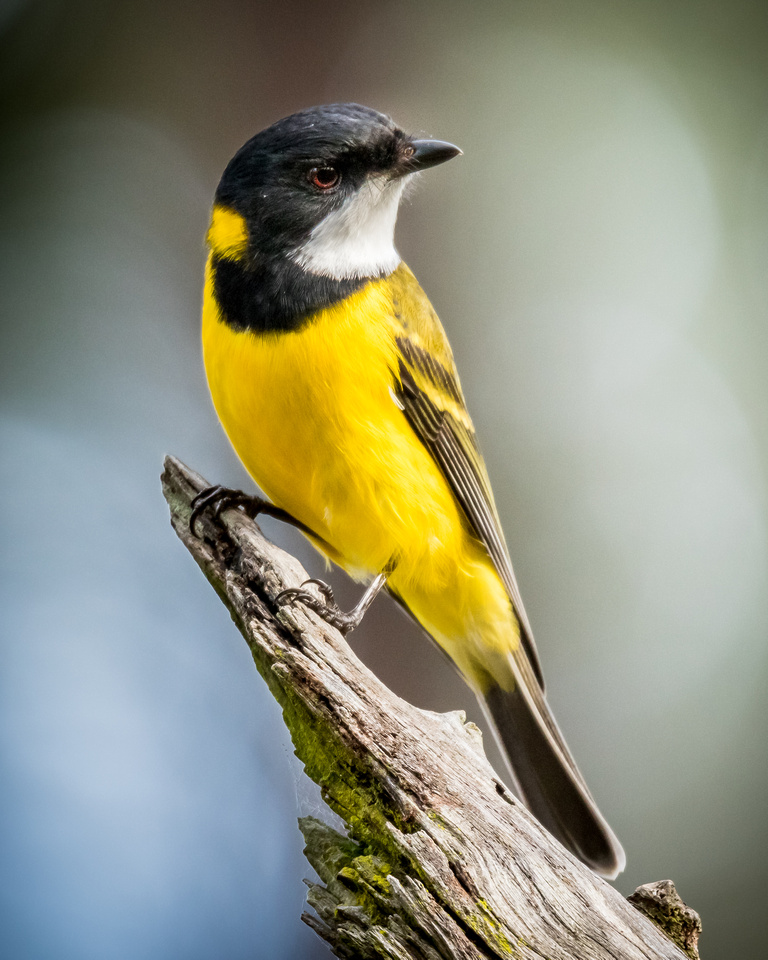 Again this year I got into Focus stacking of the mushroom shots with two off camera speedlites. Still using the Canon 60D for these shots, as the articulating screen is great for lining up the shots with the camera on the ground, saves me getting so low. I like the light and shade in this image as well as all the detail. 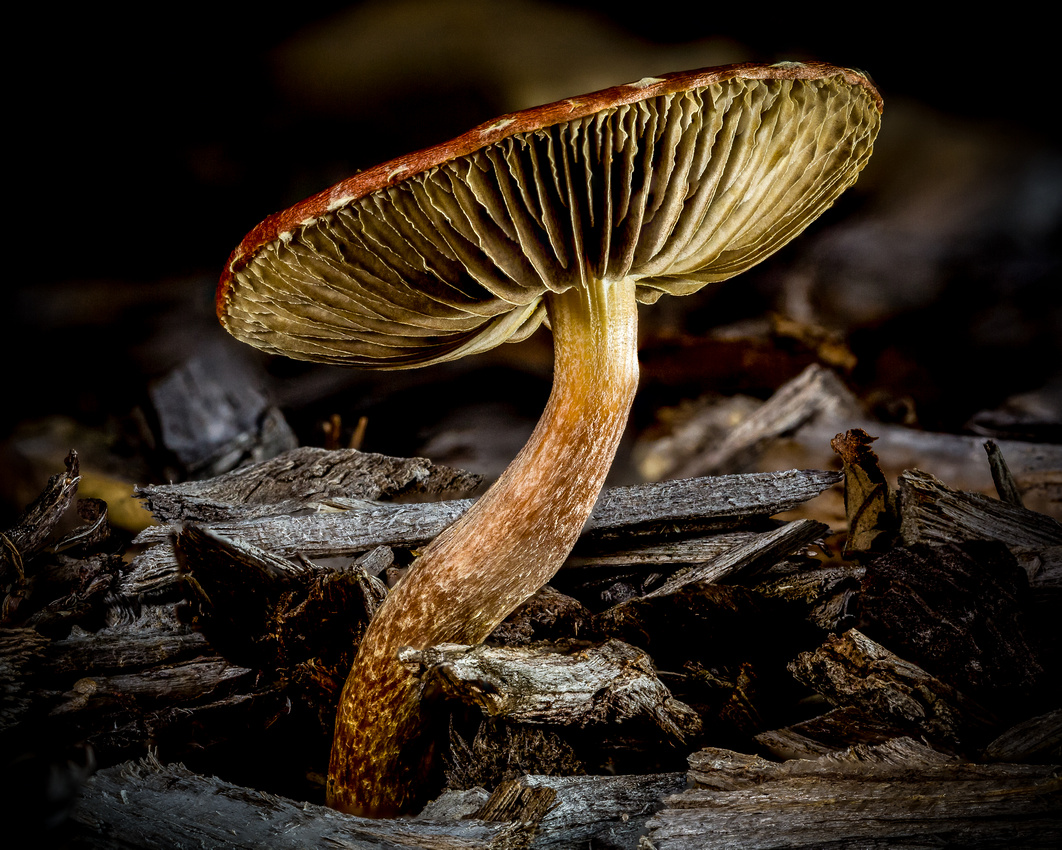 This image of the Yellow Thornbill (Acanthiza nana) as it sat and watched me frame up the shot is again one of my favourites with the leaves framing up the shot and the little piece of moss growing on the branch lower down offsetting the bird. The sun behind the bird adding the rim lighting on the right and eliminating the greenery behind, normally you want the brightest part of the image to be the main subject but in this case I think it works well with the bird being a little darker than the background. 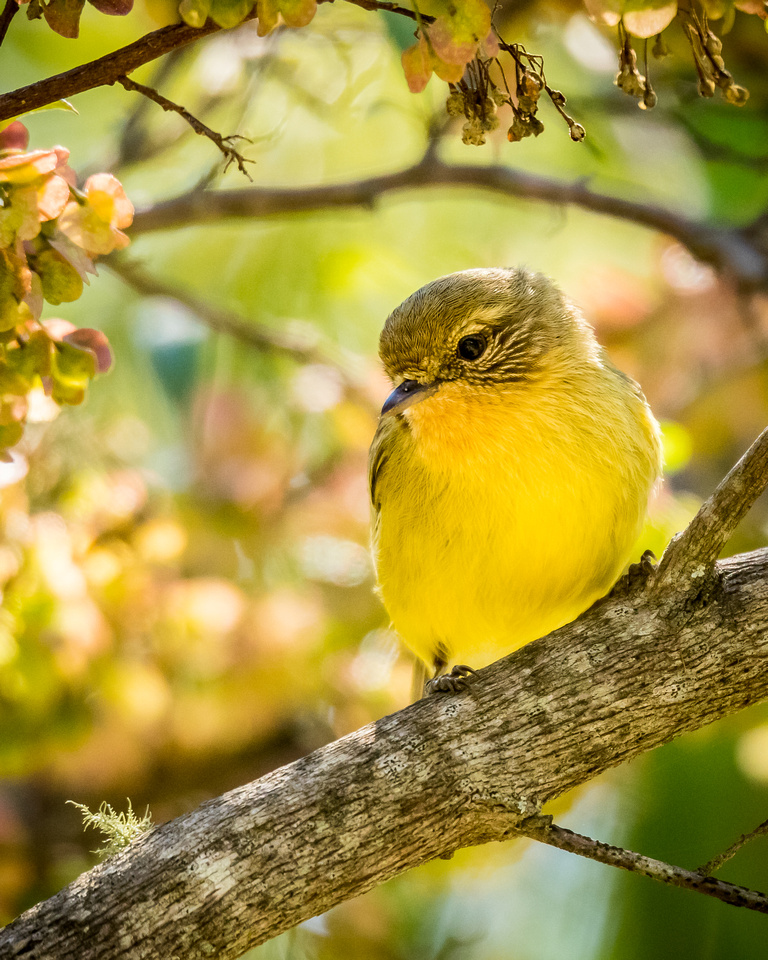 This year has been quite dry towards the end of the year so not much in the way of mushrooms about but as I spend most of my time in the botanical gardens hard not to take plant shots as well. This ones of a Red Waratah the New South Wales State flower. This one was taken in full daylight but again using the speedlite to light the flower and underexpose the image to loose the background. These flowers are always eye catching and to see them in the bush late October these bright red flower heads is really something. 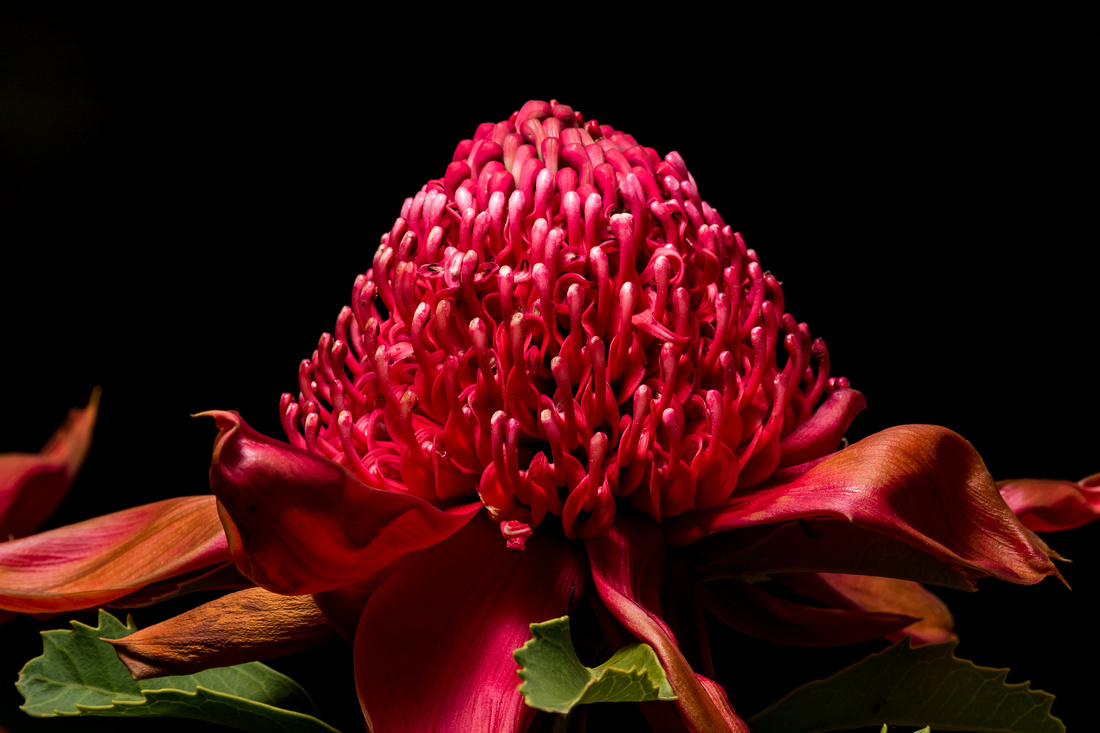 This next shot was again something special with a pair of young Welcome swallows (Hirundo neoxena) being feed by the parent. The Parent bird made regular trips over the lake collecting insects then fly back without landing to feed the young. The one on the left looks to be saying “Hey, what about me” as it watches the other bird being fed this time around, it was feed not long after.

This next image of an Eastern Yellow Robin (Eopsaltria australis) again taken in the Australian Botanical Gardens, Mount Annan, shows the catch it just made, these little ones are usually sitting on a branch or side of the tree studying the ground looking for something to feed on, this time a poor lizard was the victim, it flew away with its catch to feed its young. The gardens are alive with these pretty much year round. 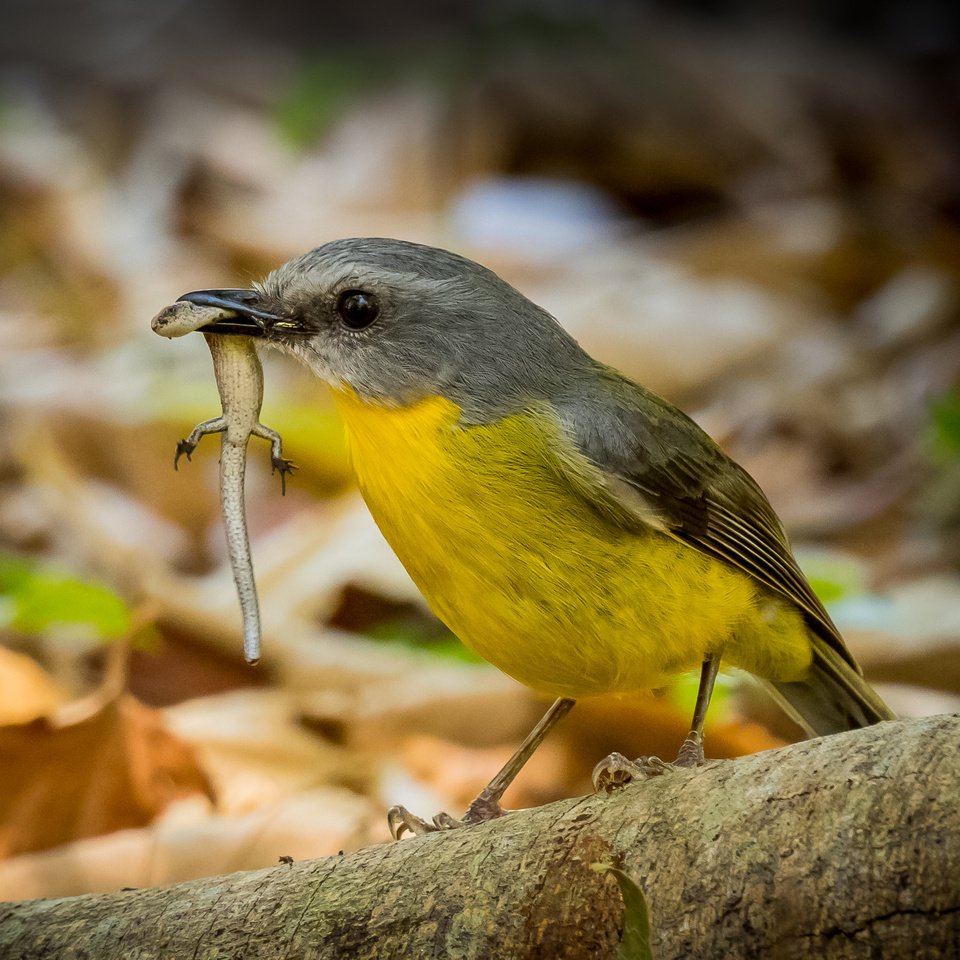 This next image or a pair of Long-Billed Corsellas (Cacatua tenuirostris) was picked up by the ABC News facebook page as its image of the day and ran as the ABCs banner image for the day on the new facebook page. The ABC got the image from Instagram after I tagged them. This one if you look around the edges you can see the results of the post processing I did to create the effect of a painting, from the comments on the ABCs facebook page it led to some confusion from some not noting if it was a painting of a photo, one thinking it was a photo of a painting. This was something I picked up from the workshop earlier in the year. The Image was taken again in the Australian Botanical Gardens, Mount Annan. 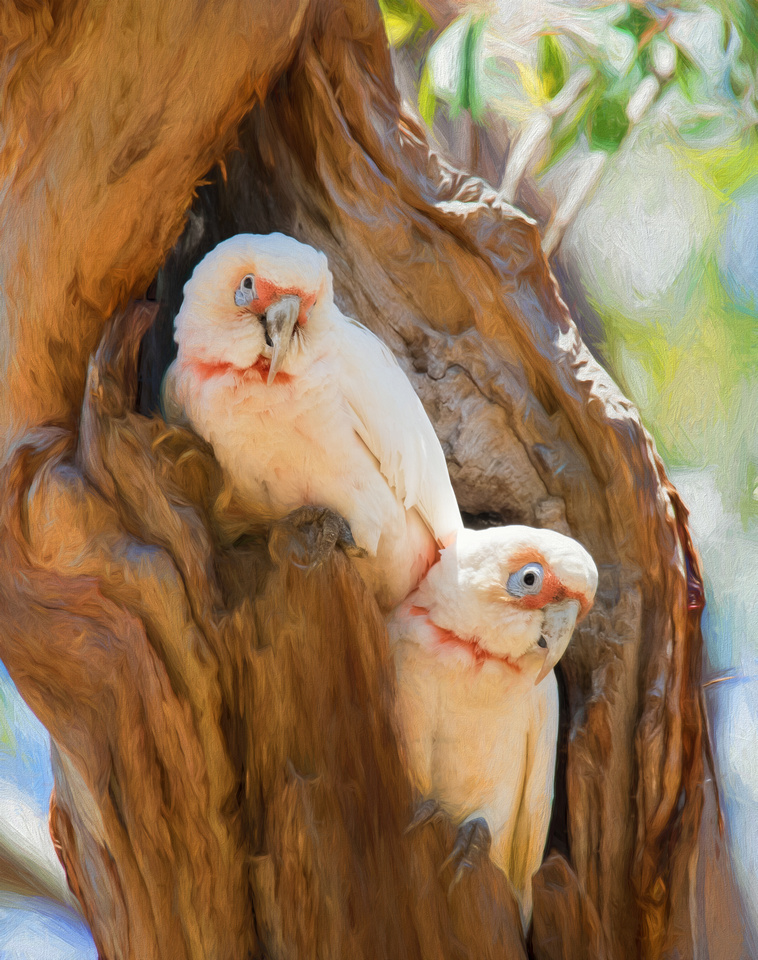 The last image in this year’s top ten shots was taken just after my first workshop in the Gardens. The gardens asked if I would be interested in running a bird photography workshop with them in the gardens, after seeing my shots posted on Instagram, so we gave it a go, after the workshop I went back in to the gardens, with a few from the class. Walking around in the gardens we came across this Lace Monitor (Varanus varius) as it went about its business looking for bird nests in hollows.  You can see the large claws these have to climb trees with, this one was looking around exploring then after the photoshoot casually climbed back down and went in search else where. 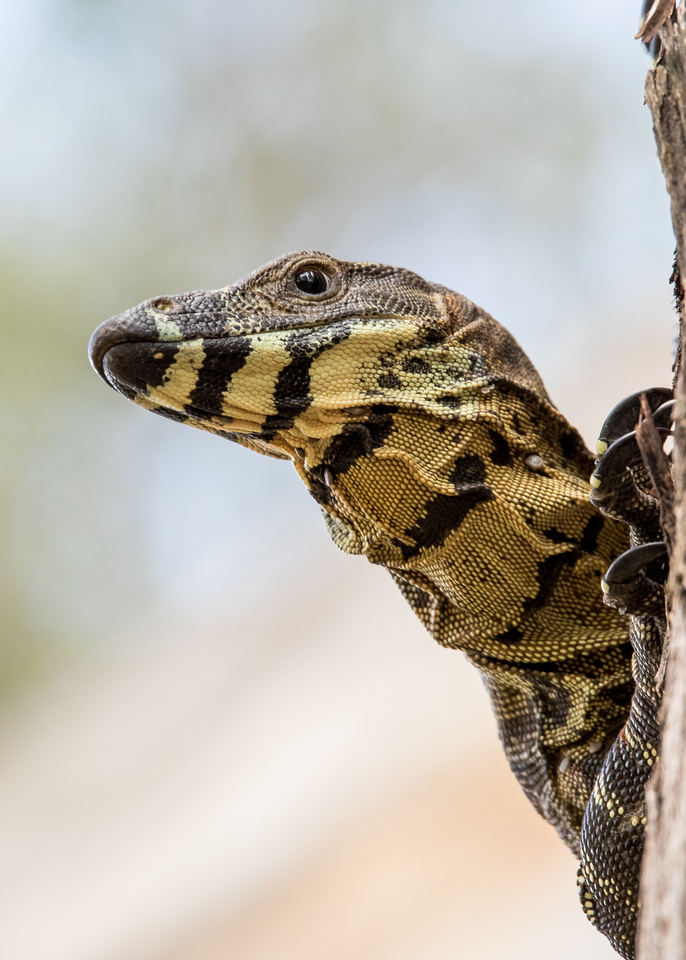 So that rounded out this year’s top ten shots, this year I took 32466 images but these soon add up when you start to use focus stacking where one mushroom shot is made up of 20 odd shots stacked together then three or four different lighting set ups and you’re at 100 images from the one mushroom. Similarly, birds in flight shots soon add up. First step in getting to the top ten was a short list of 98 images this year, then cutting it down to ten, the first few were pretty easy to remove but after that by the time you get down to the last 25 shots each shot you remove you feel guilty for taking that shot out, shots that missed out were my first ever milky way shot taken in Central Australia another aerial shot, several mushroom shots and birds in flight shots, all of which have been covered in the various blog posts throughout the year if you’re interested. But happy with this year’s quality of shots and I’ve already booked on for another photo tour in a month or so’s time again with Steve Parish in Tasmania this time in Mid Feb. Looking forward to that.

A couple of reference links.

Martin Baileys website where you'll find links to his podcasts

Steve Parish's website where you'll find links to what Steve is up to and his work.

Thanks for dropping by my blog this week, I’ll be back next week with the regular walk through shots from the last week or so.  Have a great new year everyone.