Welcome back to my weekly blog, missed a week again last week, not good. sorry about that. This week again a bit flat out here, more on that later.

First up the roundup of where the last blog post was view.

Again, a clear winner this week and this week the winner is Australia, followed by the USA then China with South Korea coming next, the following Countries all had one view each, Bulgaria, Canada, Switzerland, Germany, UK, Italy, Mozambique, Netherlands, Thailand, Turkey and the Ukraine. So again, a good collection of countries around the globe viewed this week’s post good to see. Feel free to leave a comment at the bottom of the post if you like, mentioning what country you’re from.

The last week I was a little tied up in preparing present for a photography talk to the Revesby Garden club based at the Revesby workers club. My first time giving a talk in public on photography. The talk was about the basics of photography Subject, Light and composition and how to improve your basic photography based on those three things. I also showed of a series of shots during the talk to reinforce my points. By all accounts it was received well and everyone was happy with the talk from the feedback I received both at the venue and later on via phone conformation. So a good weekend.

Now back to day 2 of my Tasmanian trip.

Day two saw us leave Launceston and head east to the Bay of Fires conservation area via St Columbus Falls with the odd stop along the way.

These first two shots are just a pull in on the side of the road in on of the many forests, this one was a pine plantation, so not Tasmanian natural forest.

The trees are all covered in moss giving the green tinge to the trunks whole the ground is covered in the dead pine needles making a striking contrast to the shot. 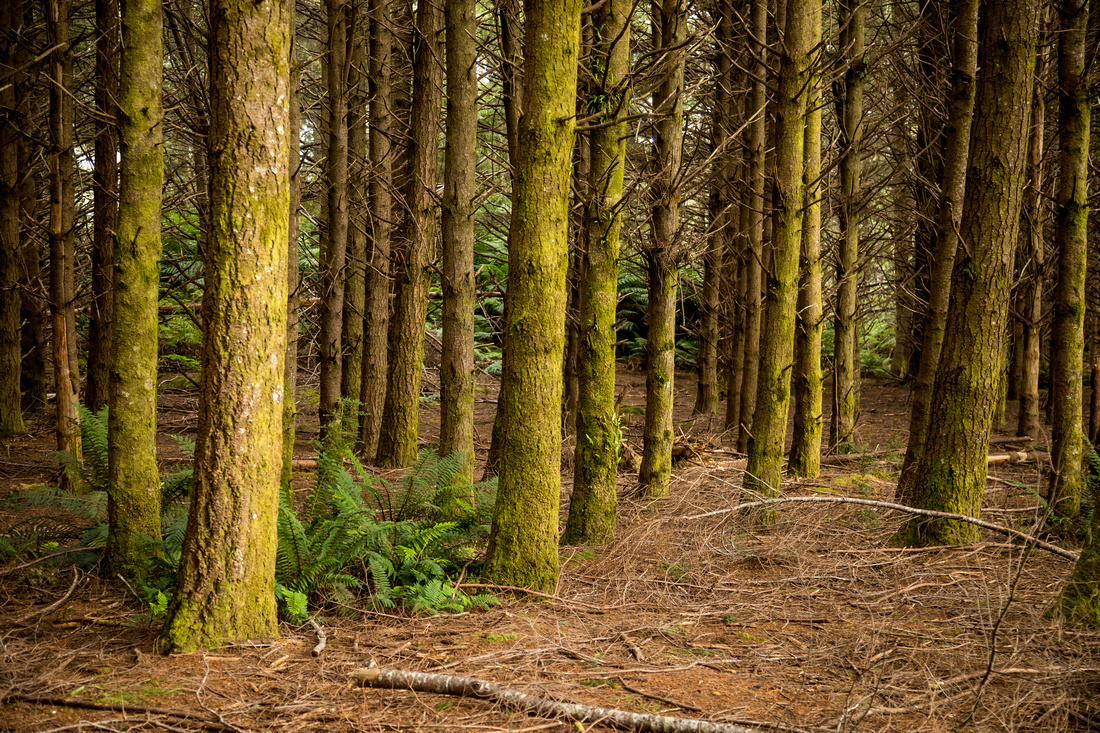 Where as this shot is looking straight up, showing just how straight the trunks of these are. 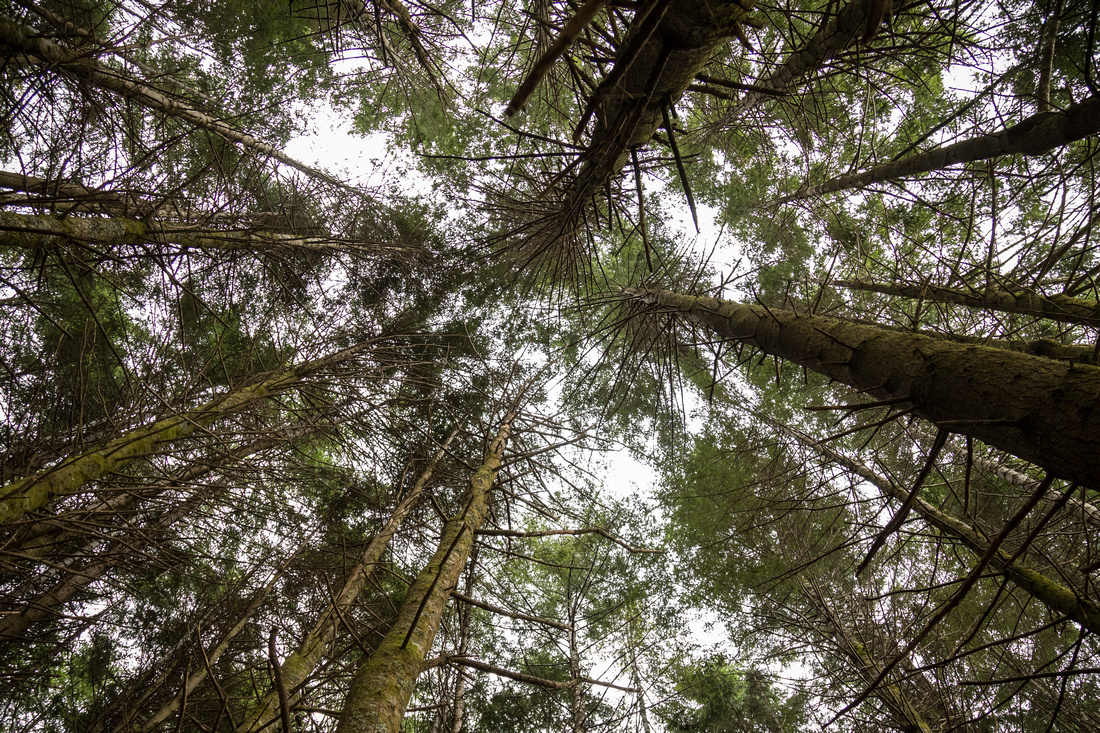 After the stop off we headed on to St Columbus Falls. It was a little bit of a walk to see the falls and again fungi was about on the fallen branches, this time bracket Fungi. 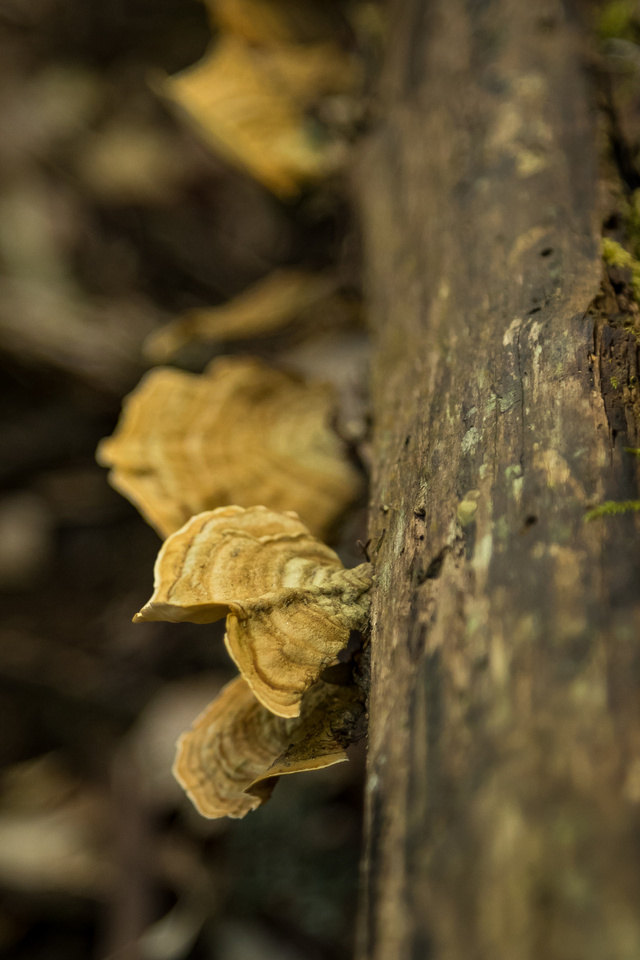 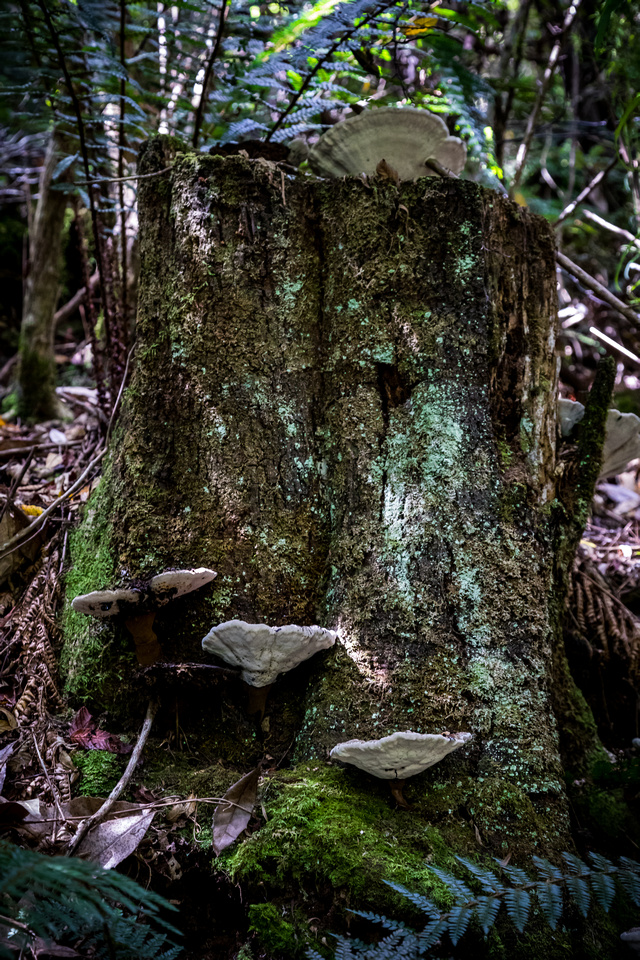 The walk was along a path between the tree ferns. Again everything was covered in green. 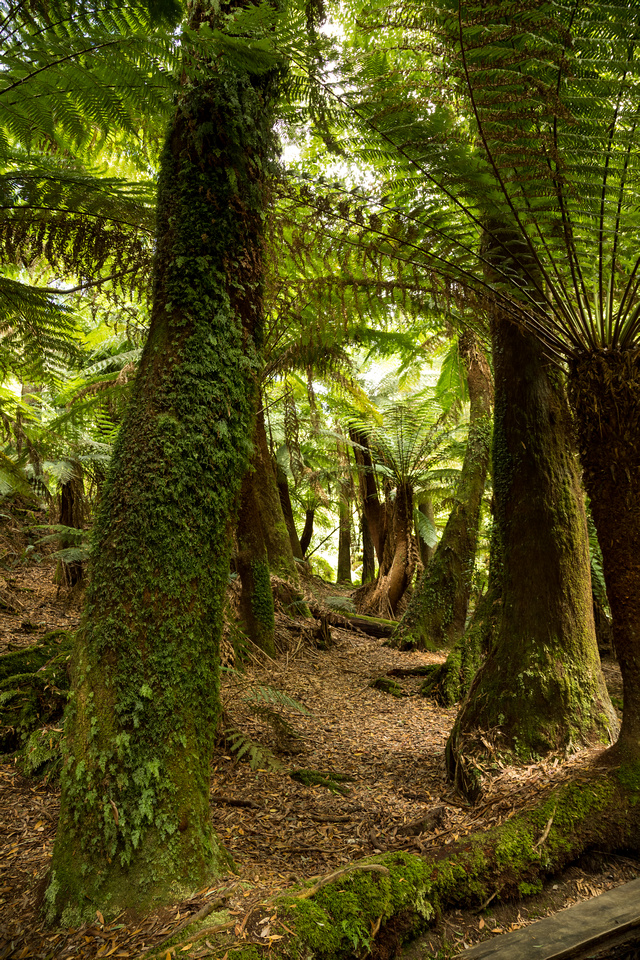 The falls were out in the open and in full sun so far from ideal light to do this kind of shot. This was about the best I managed here and not overly happy with this one, but it shows not every shots a winner and the extreme lighting certainly didn't help. Thou I've seen a few shots from some of the others on the trip and they had but angles of the shot, but the lighting certainly didn't help any of us in this location. 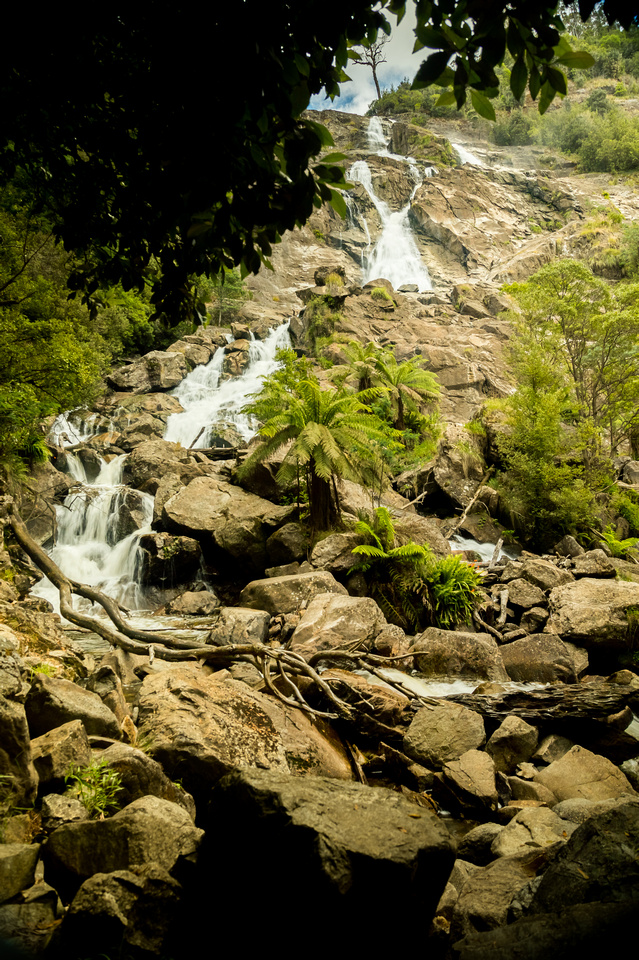 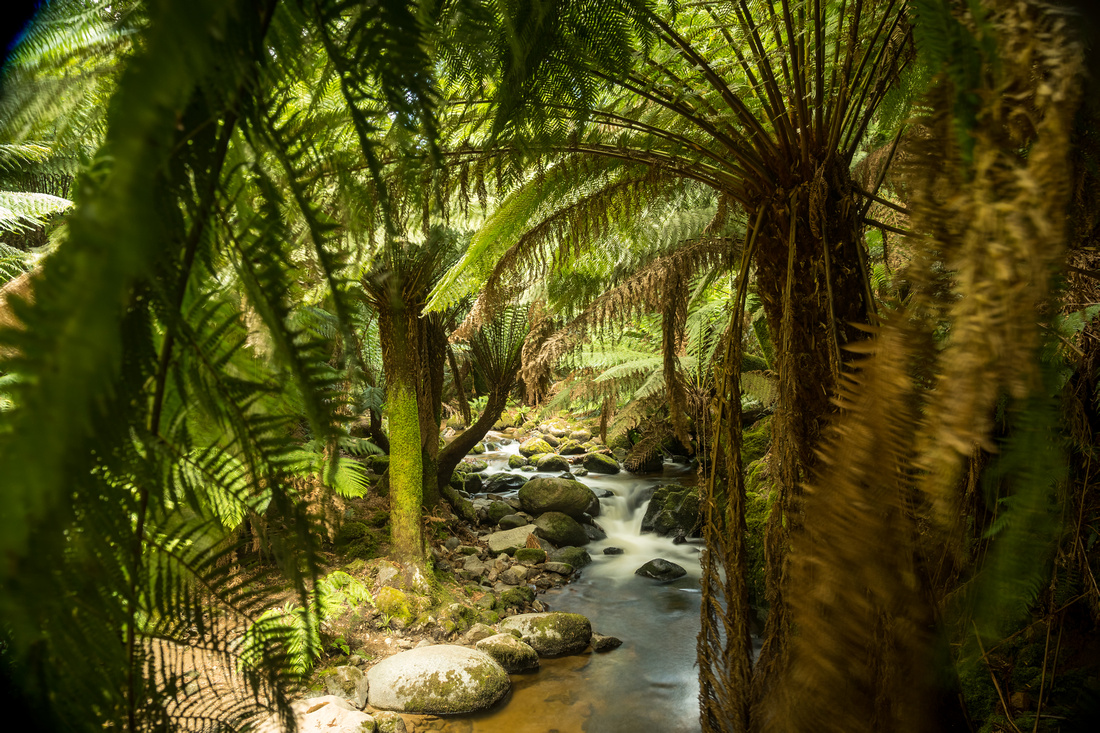 Walking back from the falls I stopped and took a few shots of this fungi growing on a log, not the best shot. 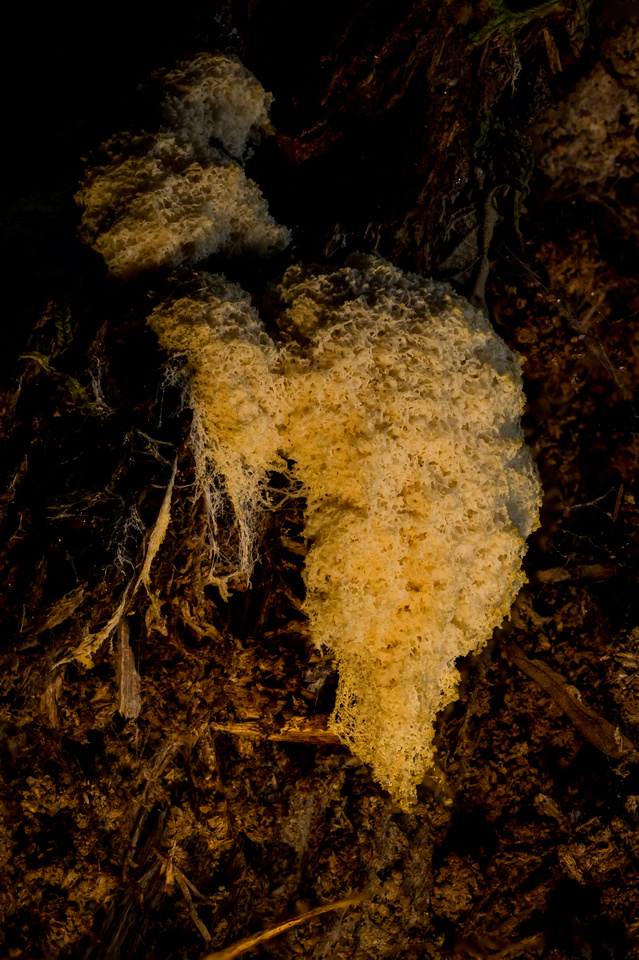 From there we drove to the coast the Bay of fires and to Binalong bay. Nice clear water white sandy beach some cloud in the sky to make it more interesting. All up a nice place for a bright day. 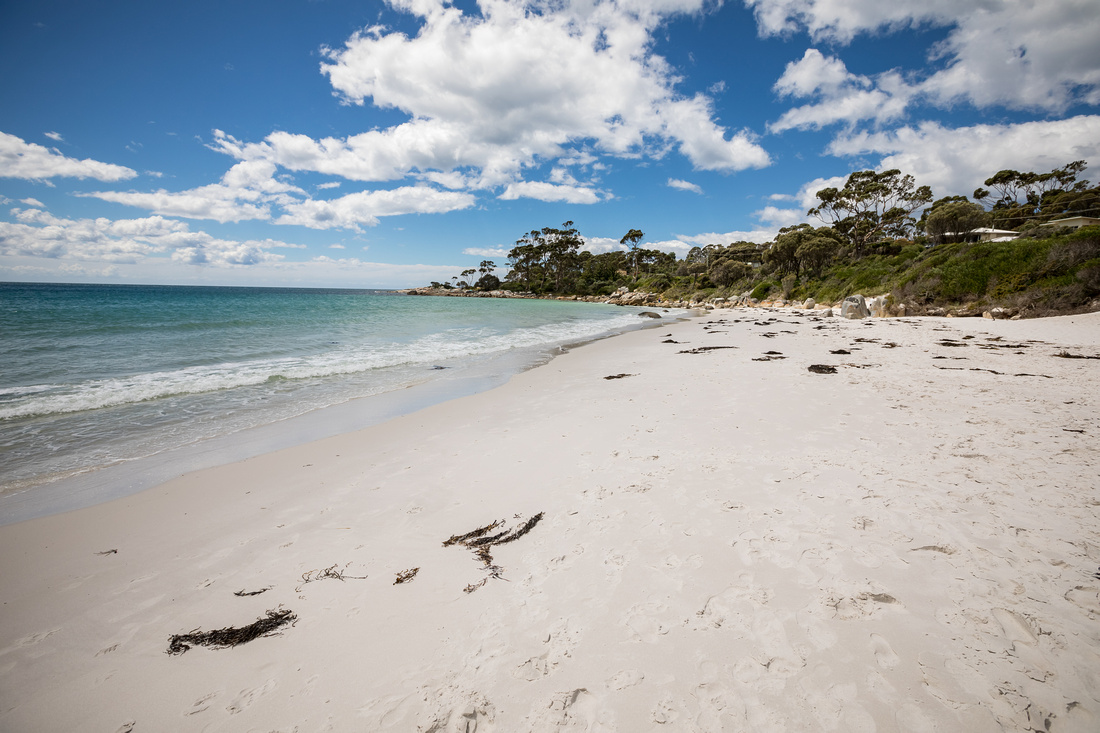 Towards the end of the beach, there was a flock of Terns diving for fish. This one with fish in beak is a Crested Tern (Thalasseus bergil) from what I can work out. 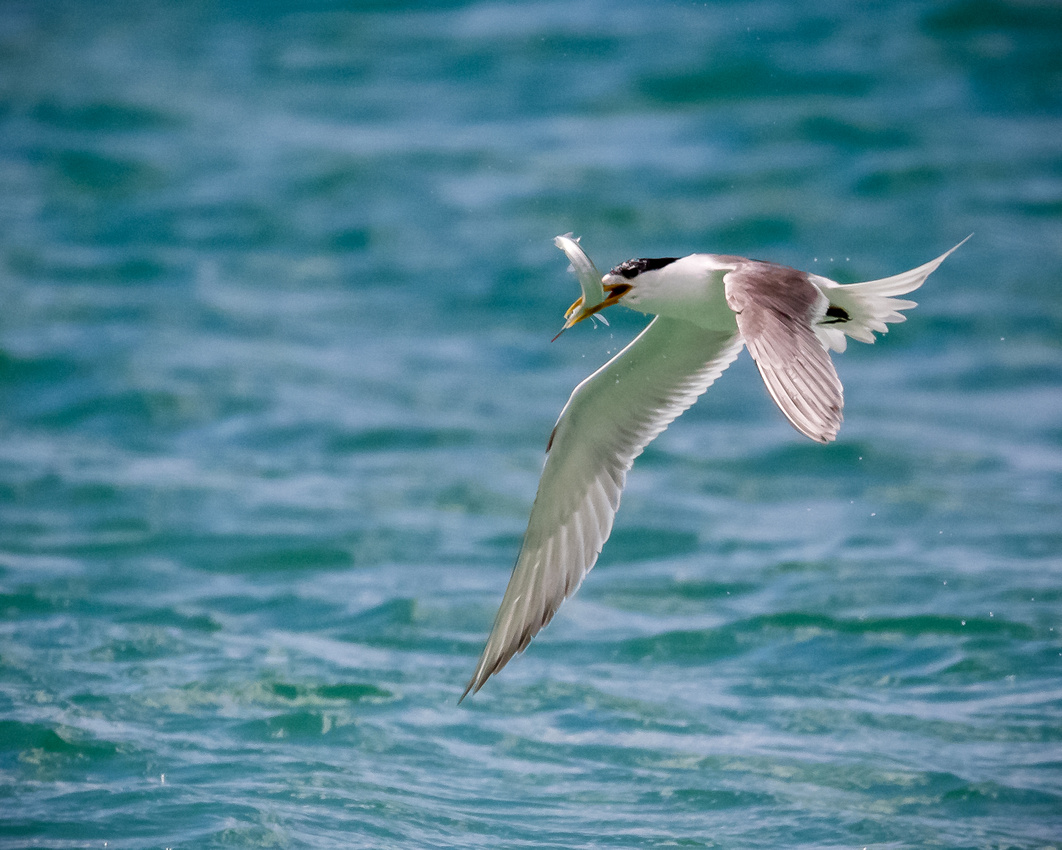 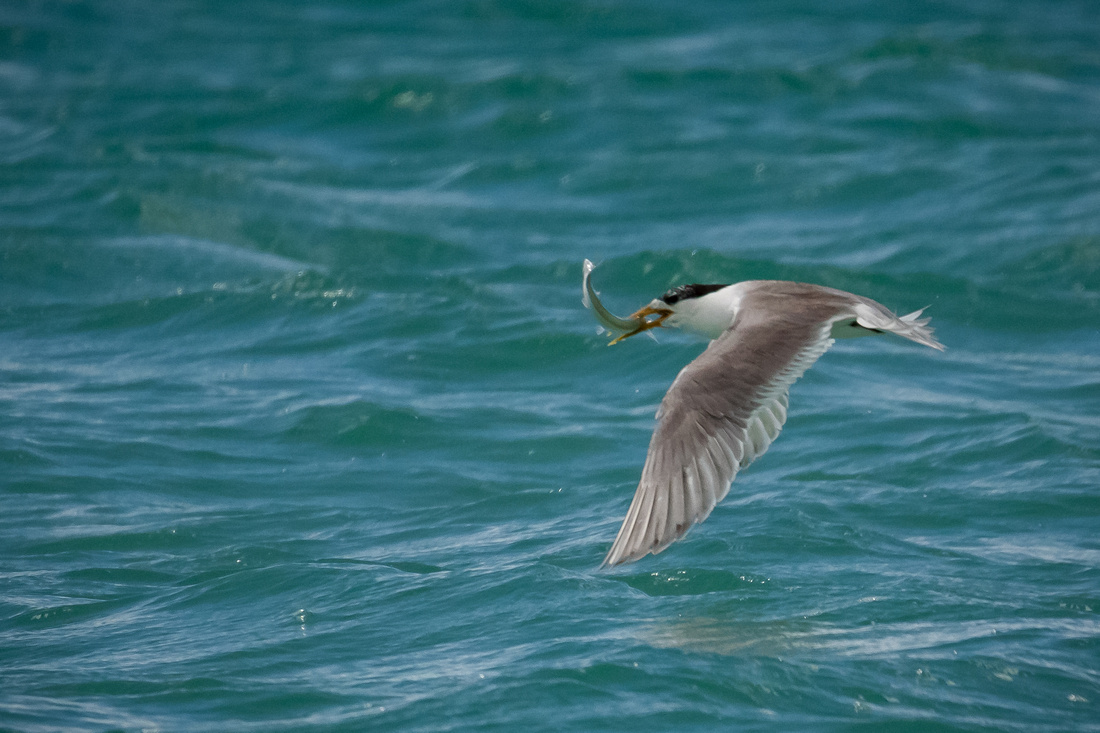 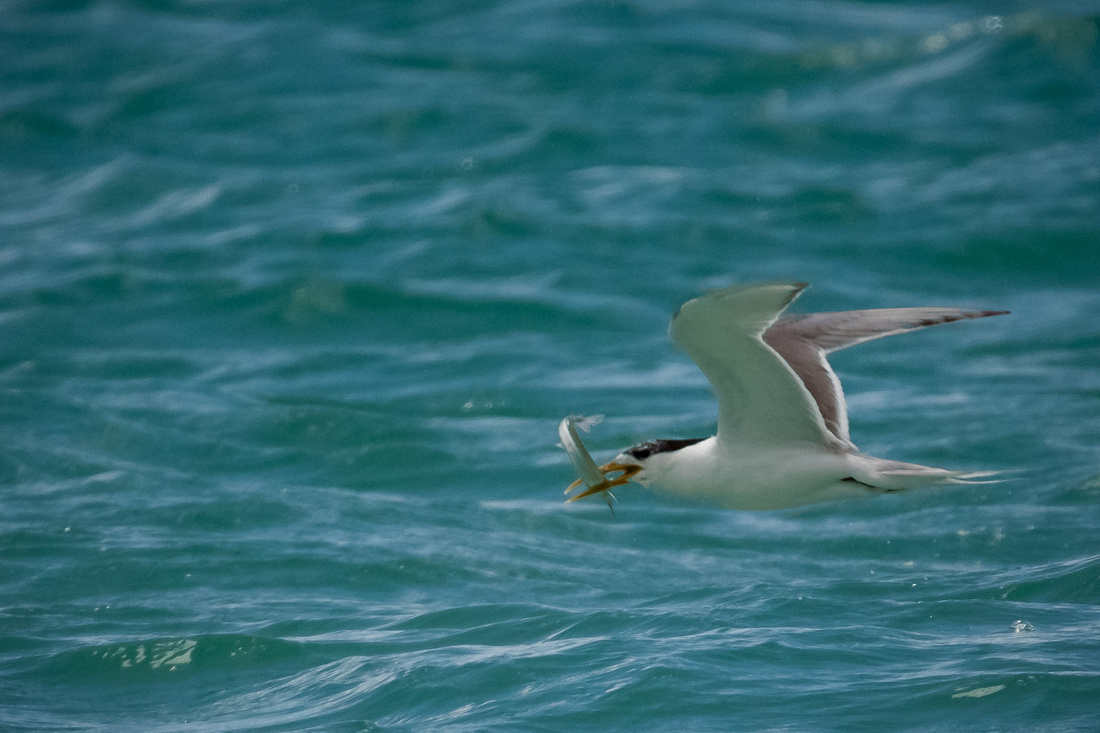 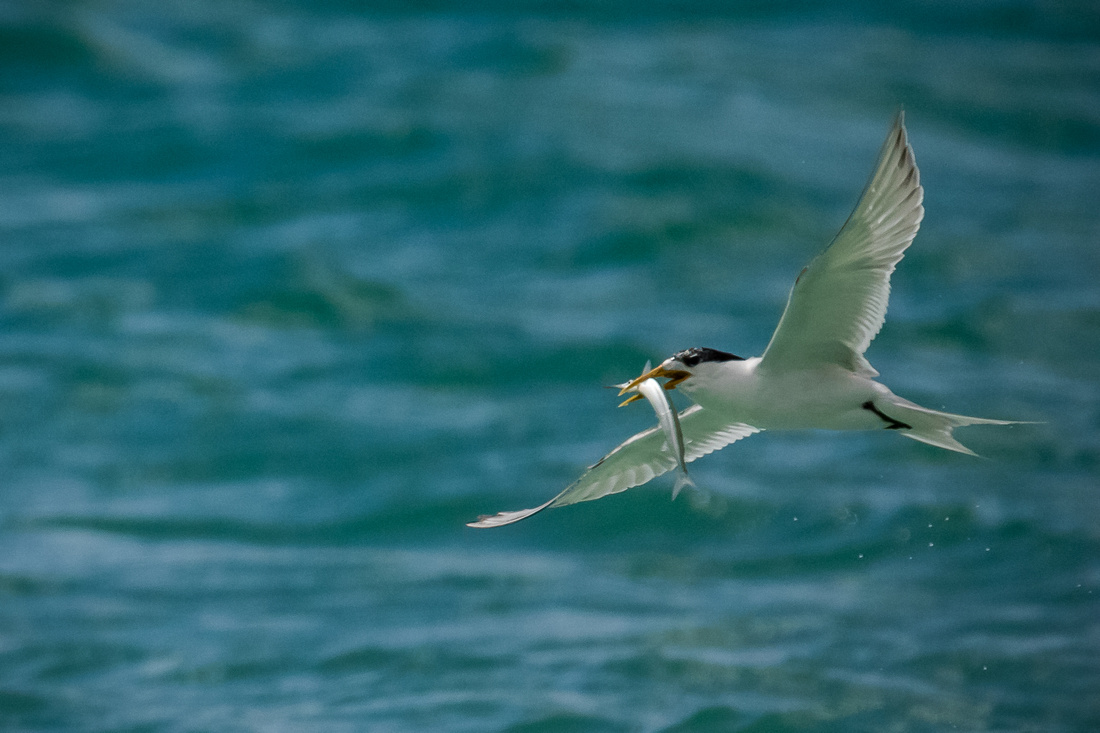 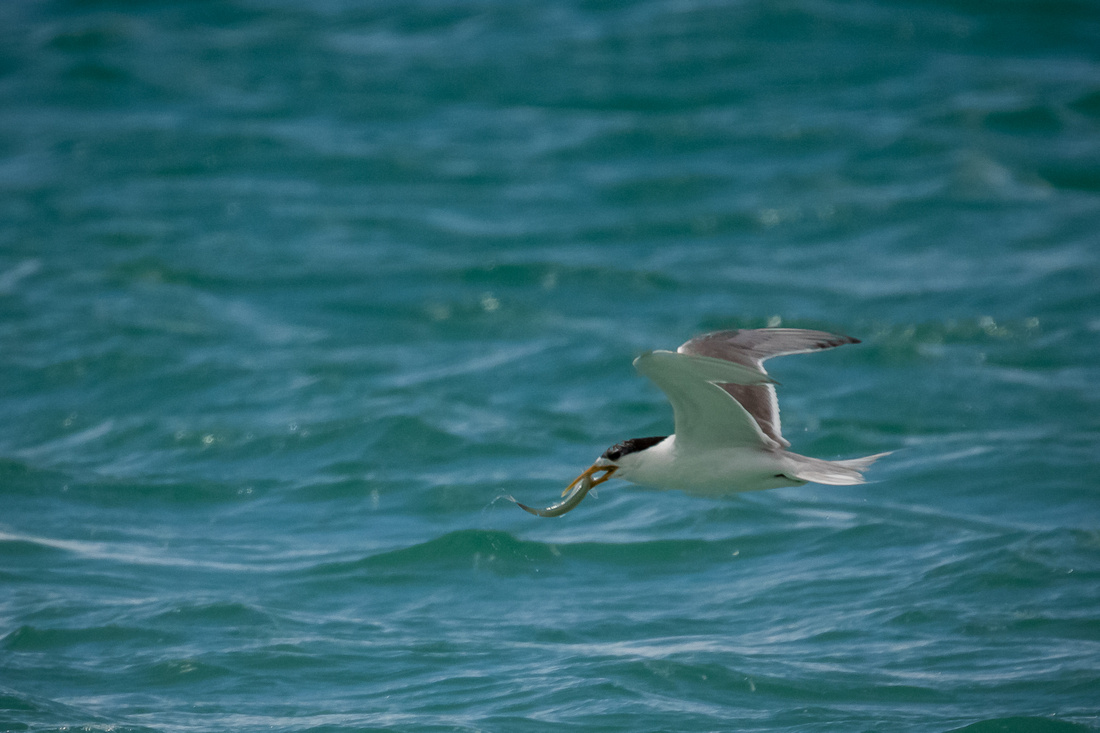 This next shot was a little off on focus so I had a play with Topaz to see what I could come up with, happy with this one. Some thing a little different, but think it came out OK. 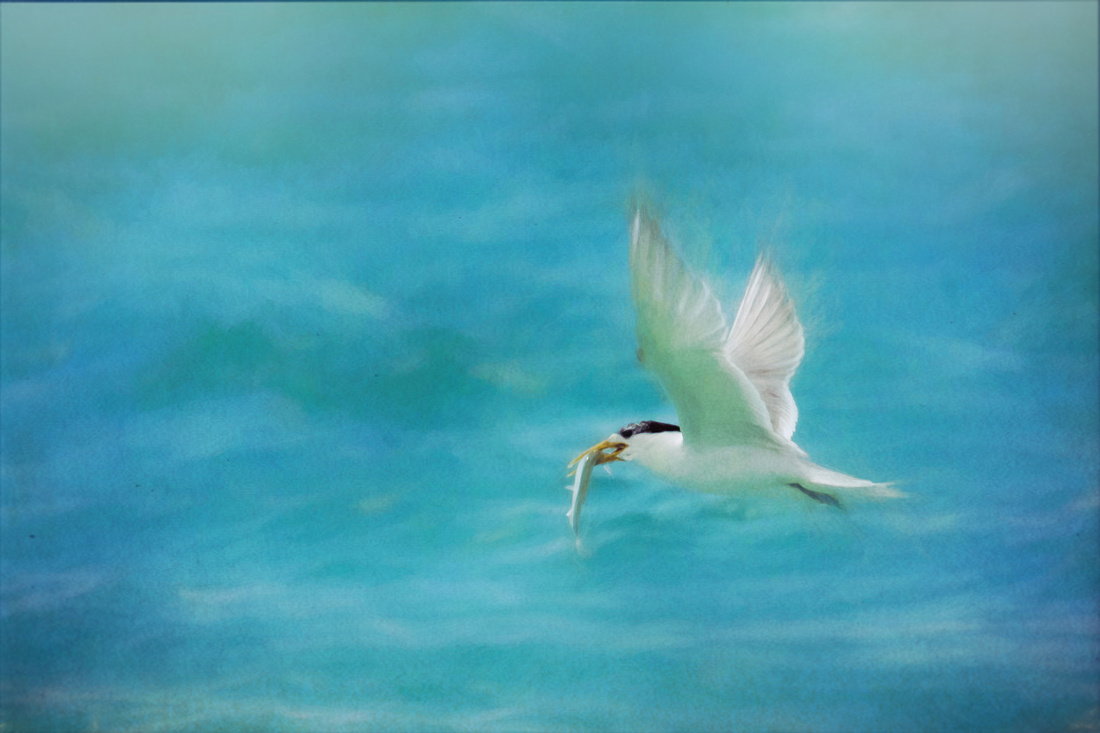 A Gull decided he also wanted a feed and rather than get wet though it would try and steal from the Tern. The Tern out manoeuvred the Gull and flew off with the catch. 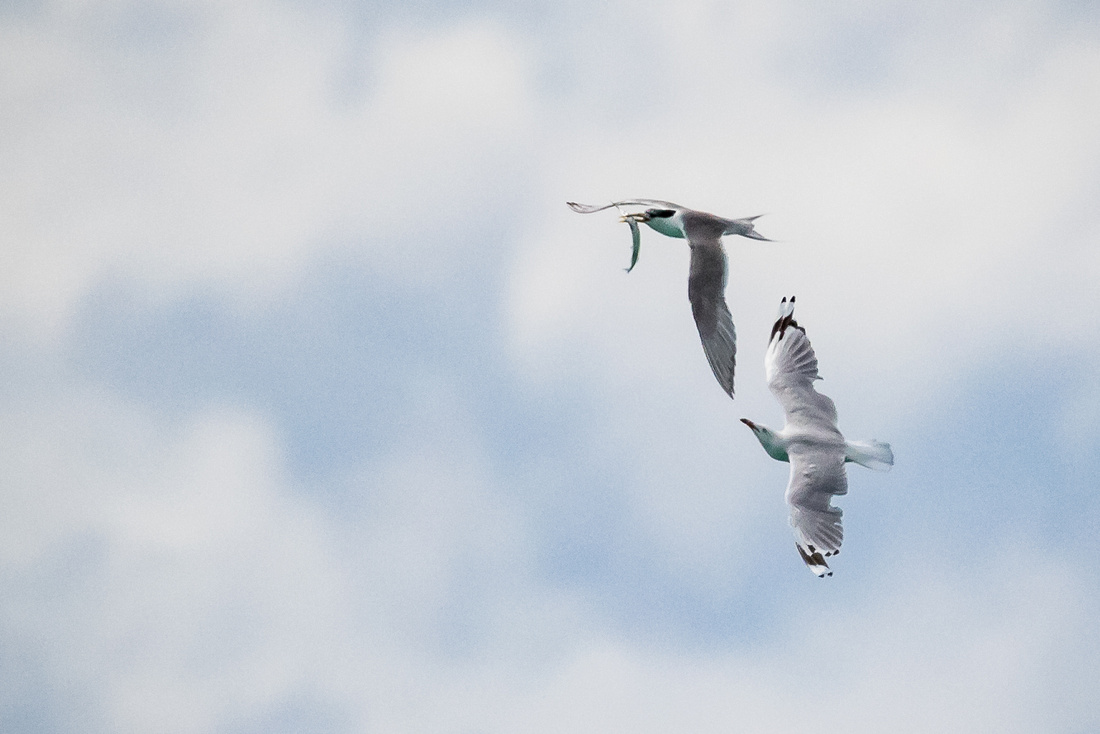 Another shot just as the Tern was about to hit the surface of the sea. 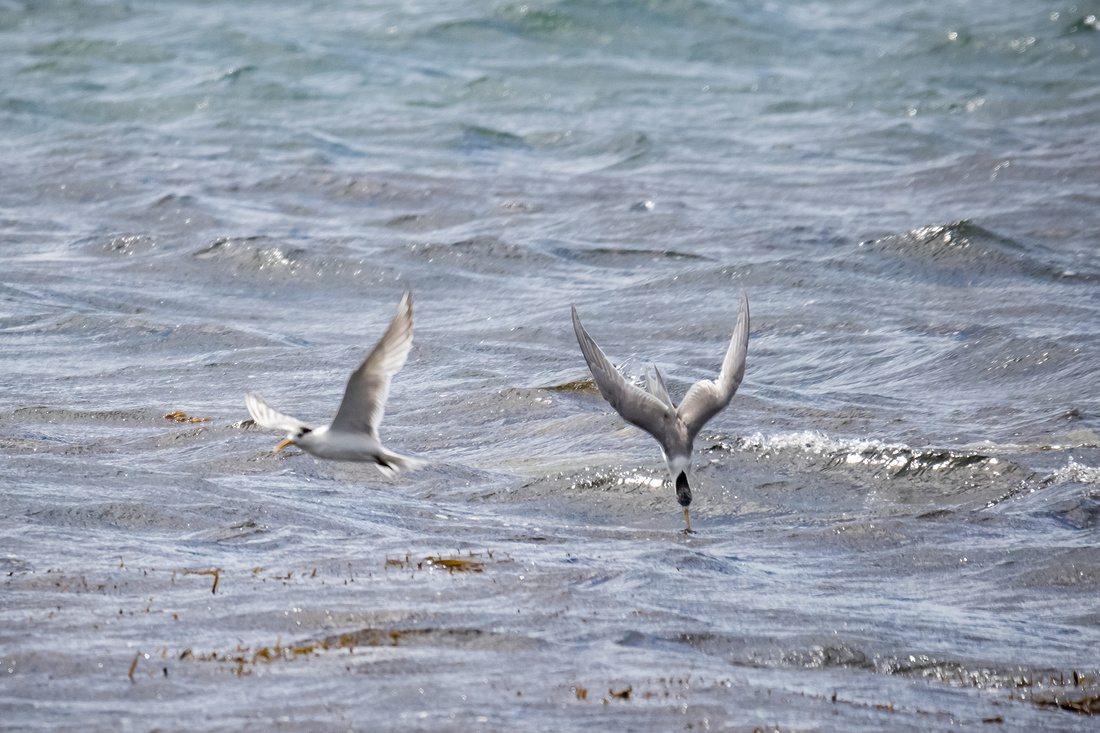 Along the Beach a Silver Gull (Chroicocephalus novaehollandiae) was on patrol, probably hoping for the spoils dropped by the overhead Terns. 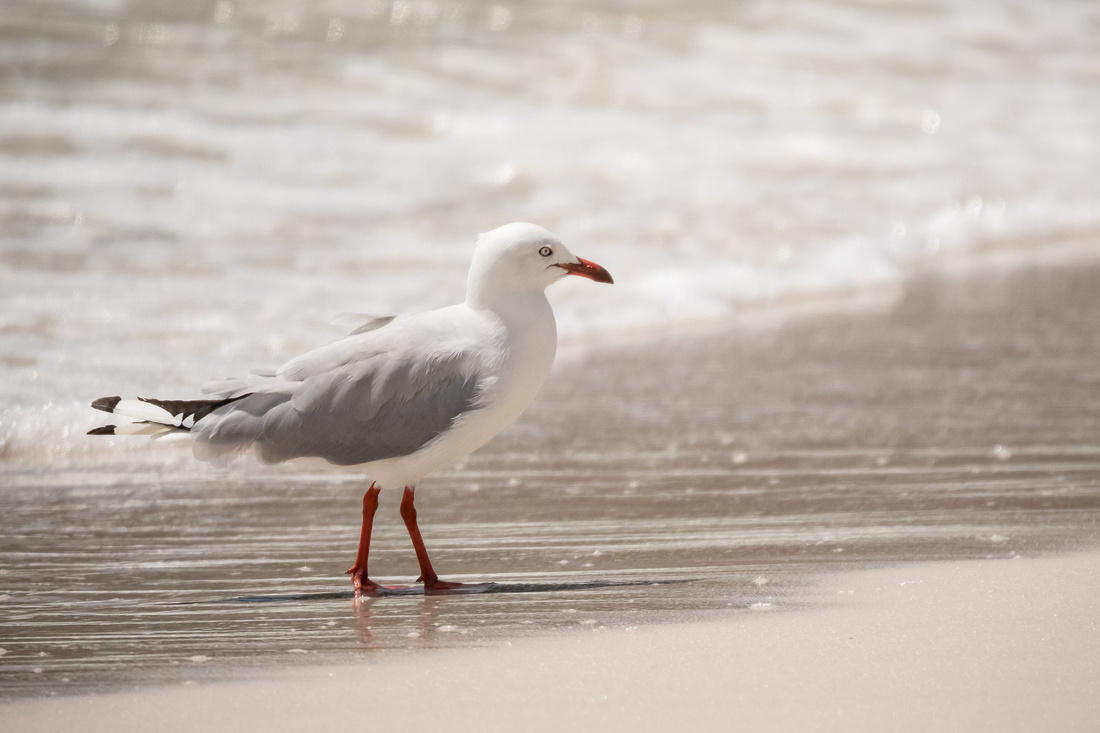 From there we drove down the coast towards Bicheno. Stopping for fuel along the way, where I spotted this flowering gum on the other side of the road, So I managed to get this shot. There was a fair bit of wind about to the branches were moving quite fast so not to many of these turned out due to motion blur. 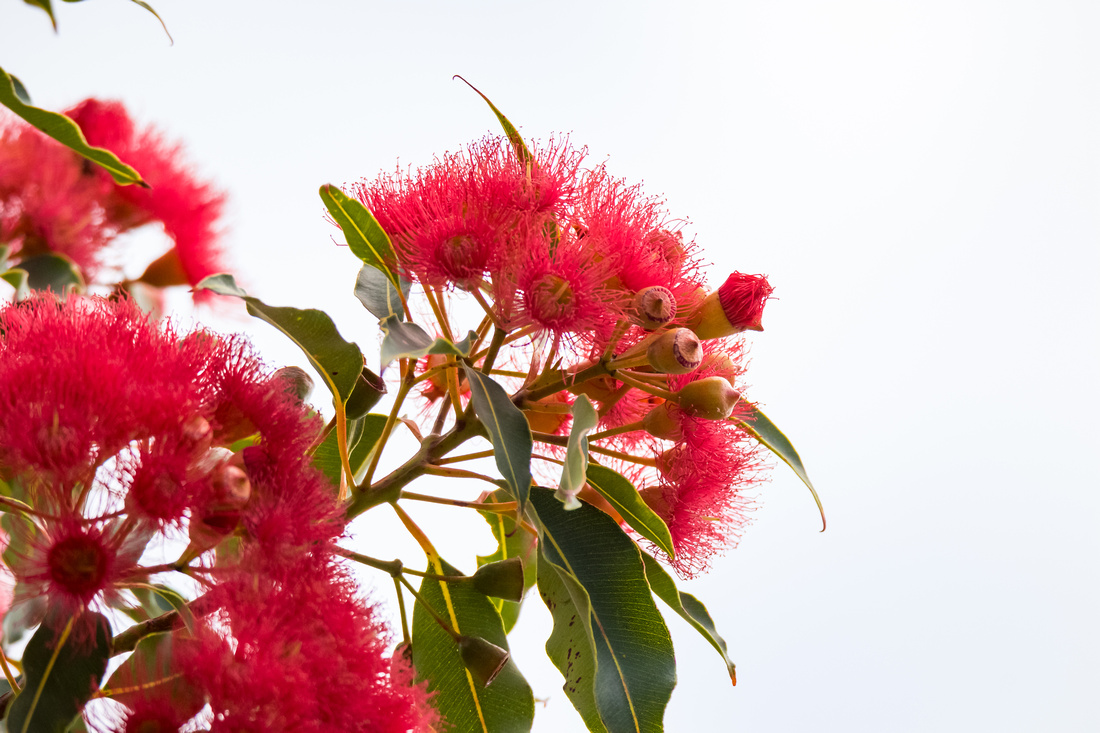 At Bicheno we managed to get a couple of coastal shots, this is just one of them, you can see the heavy clouds above threatening to rain on us at any time.

After Bicheno we drove down to Freycinet National Park to catch the Hazards at sunset before driving into Hobart for the night.

When we got there it was threatening rain and occasionally did and was blowing a gale so again interesting conditions for these shots. Still a great area and one to come back to one day to try again. Some of these shots came out OK. But again something I need to work on. I tried various shutter speeds and angles the slower shutter speeds didn;t work as well most times with the strong wind even with a decent tripod and holding it down at times there was still camera movement. These are the better of the shots I managed. 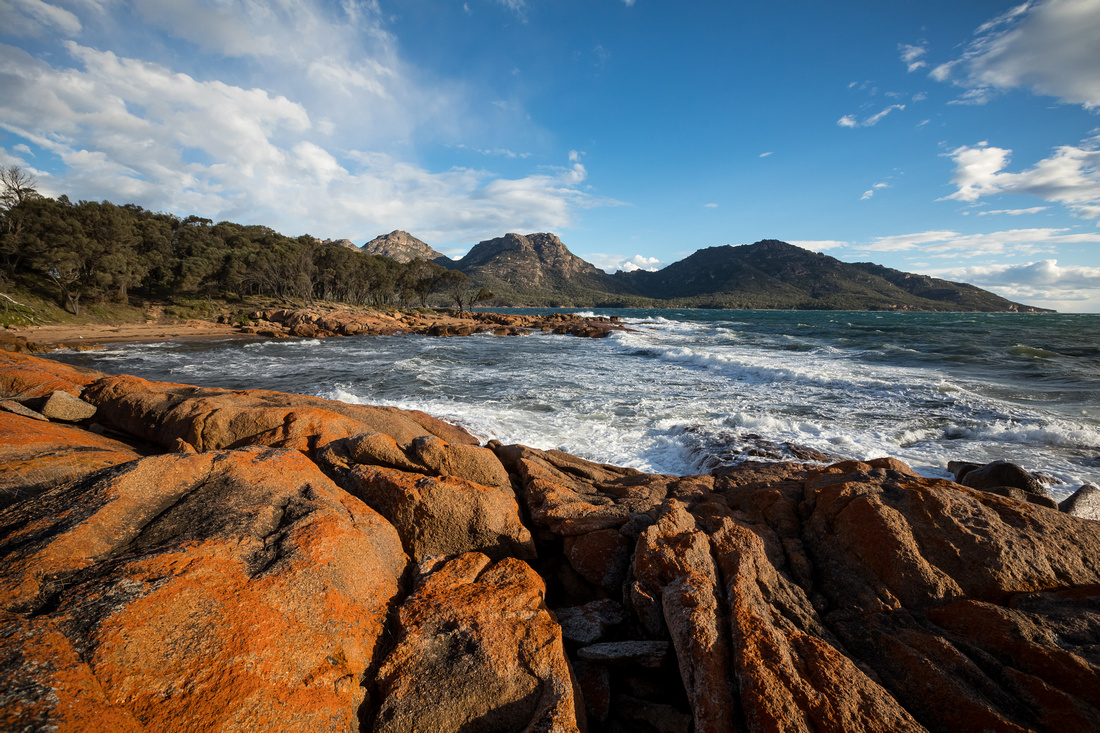 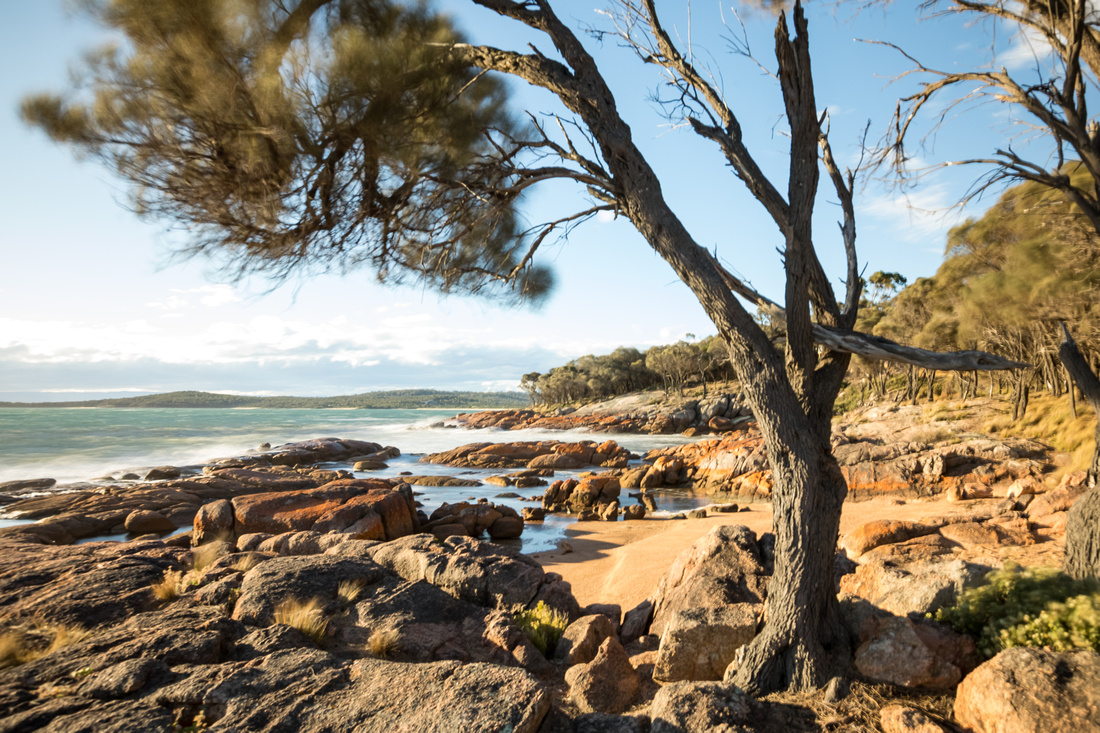 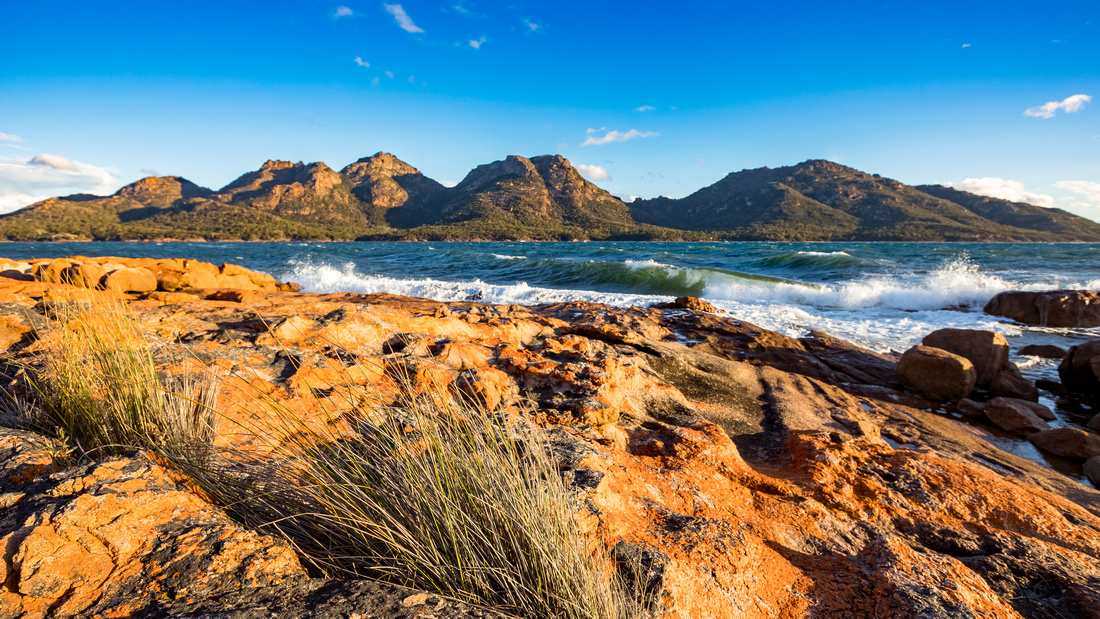 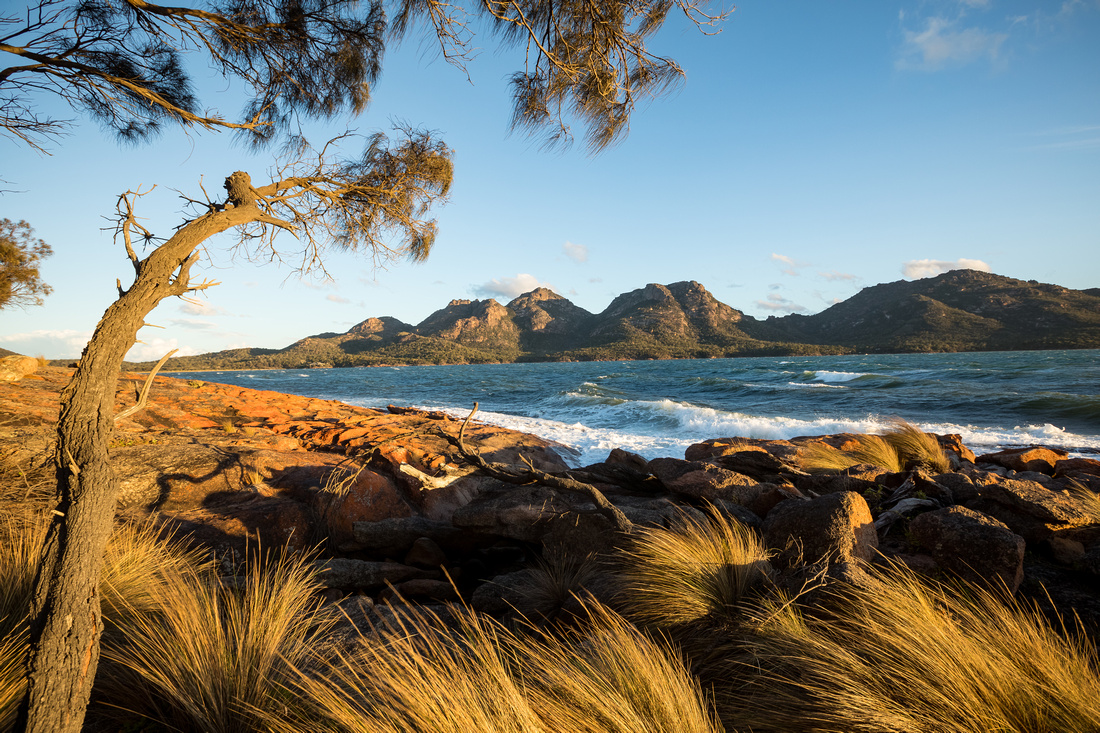 With the sun coming in behind the small waves and the wind whipping them up I tried to get a few waves with the sun lighting them from behind. Again not that successful but almost there. Some better than others but still not a great shot. 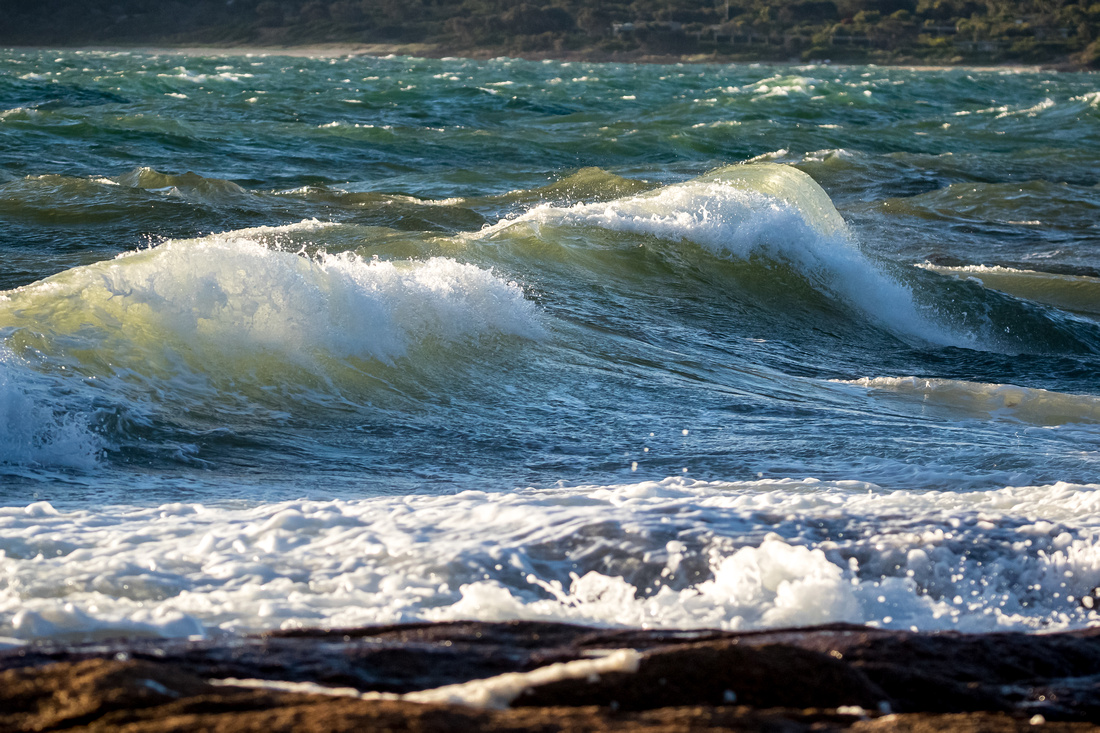 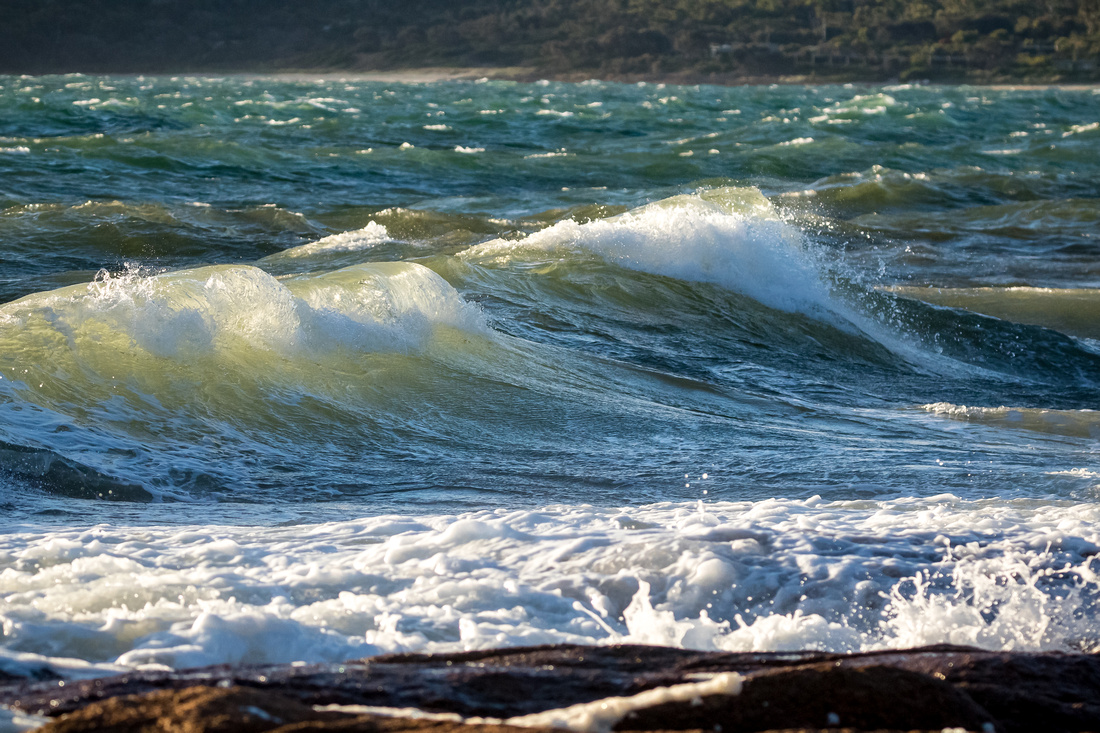 So that's it for Day two of the Tasmanian trip. I'll be back with day three next time so stay tuned.

Thanks for dropping by my blog this week. Back with more from Tasmania next time.