This week's blog is again a walkthrough of the shots taken last weekend in the Australian Botanic Gardens, Mount Annan. Off to an early start, last weekend arrived before the gates opened, So a quick walk along the fence line from outside the gardens and I spotted an Australian Pelican (Pelecanus conspicillatus) 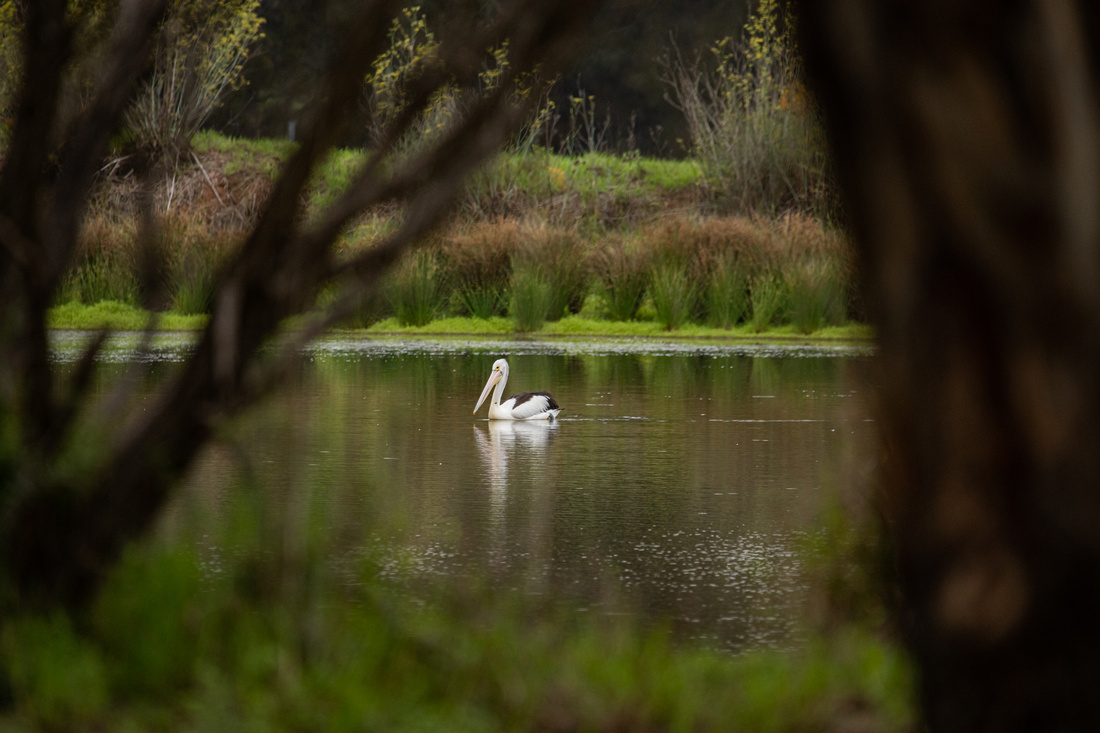 While I was waiting for the Star of the week to put in its appearance there were still a few fungi about so I managed a few setups before the star arrived. This one with the usual set up Canon 60D on the ground making use of the articulated screen, two off-camera lights. 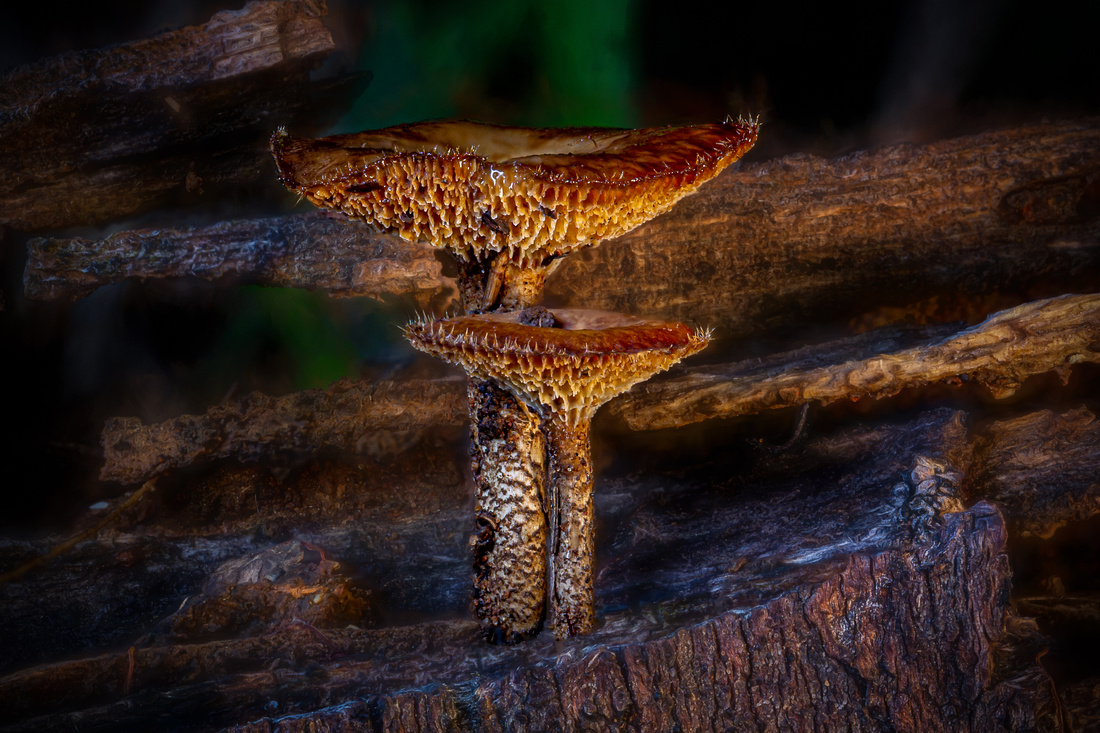 The highlight of the week was the return of the Australian Owlet-Nightjar, (Aegotheles crisratus) These are basically little fluff balls with eyes well this one is. It's occupying a luxury hollow that has two entrances and one with a balcony. the first shot shows it enjoying the view from the balcony over the gardens in the woodland area. 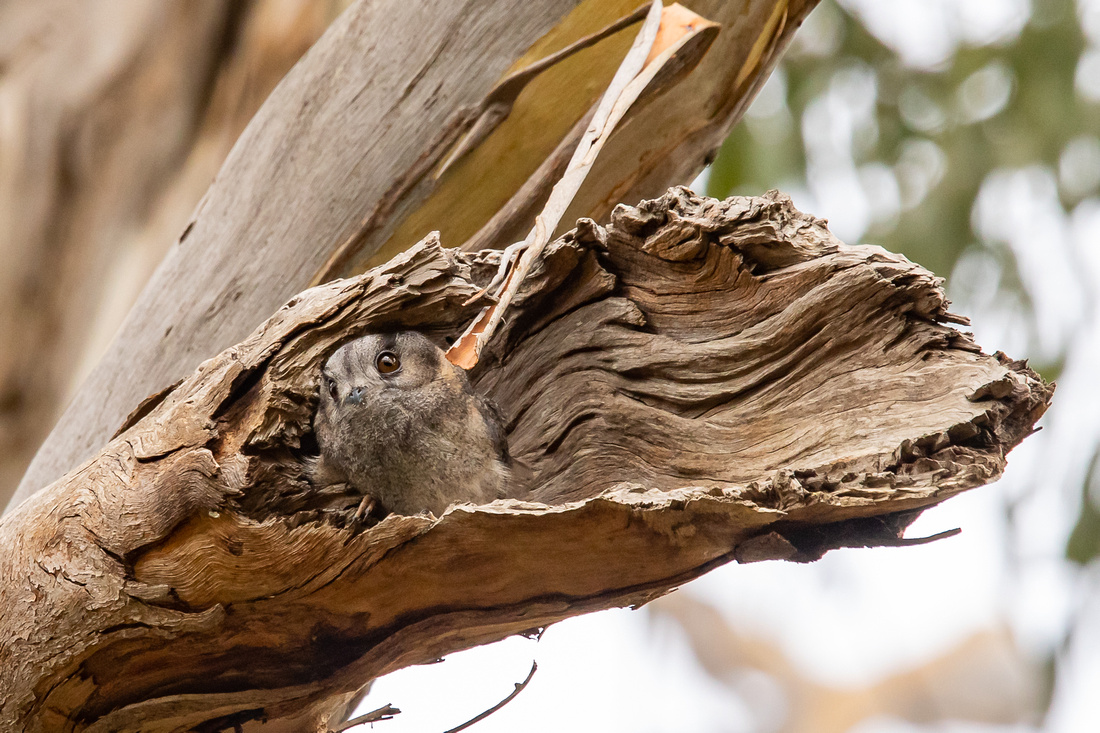 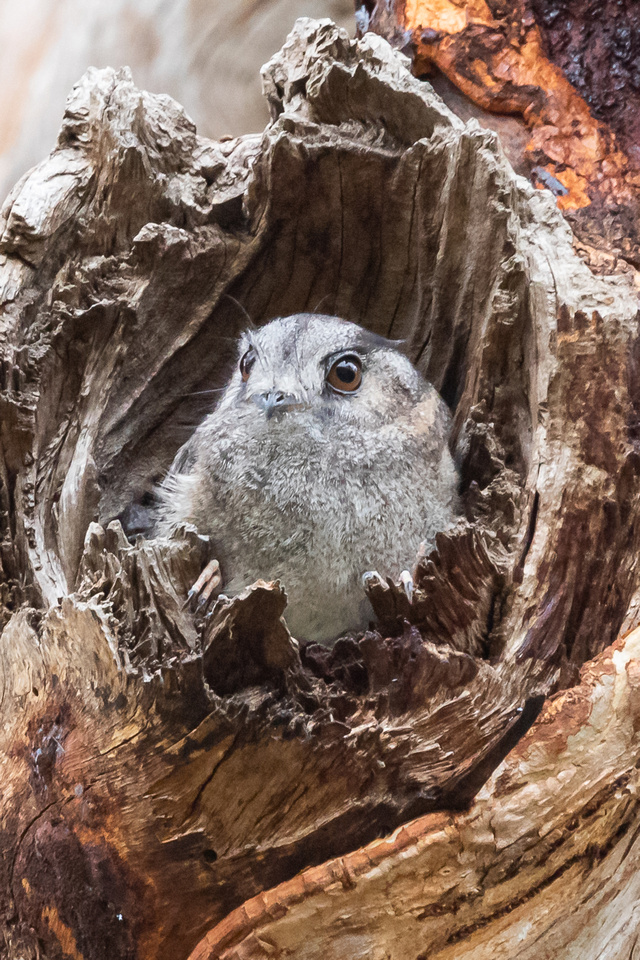 Like most hollows, they are rarely free and the Night-jar appears to have take up residence in a hollow previously occupied by a pair of Red-rumped Parrots. The Parrots want their home back. So there's a bit of a battle going on for possession of the hollow. So this next series shows just one of the mini battles, the female red-rump was above the hollow with its tail hanging over the hollow. The Night-jar latched on with its beak, much to the Red-rumps dismay. The red-rump temporarily relocated and the night-jar stood guard with its mouth ready for the next assault. 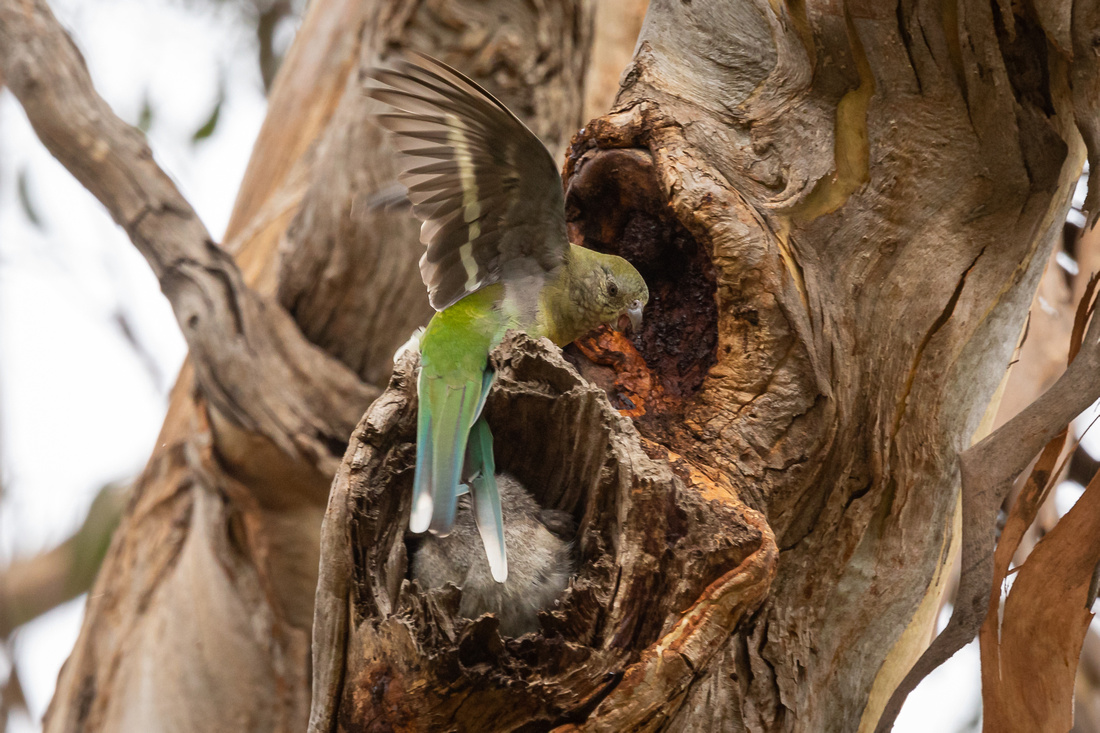 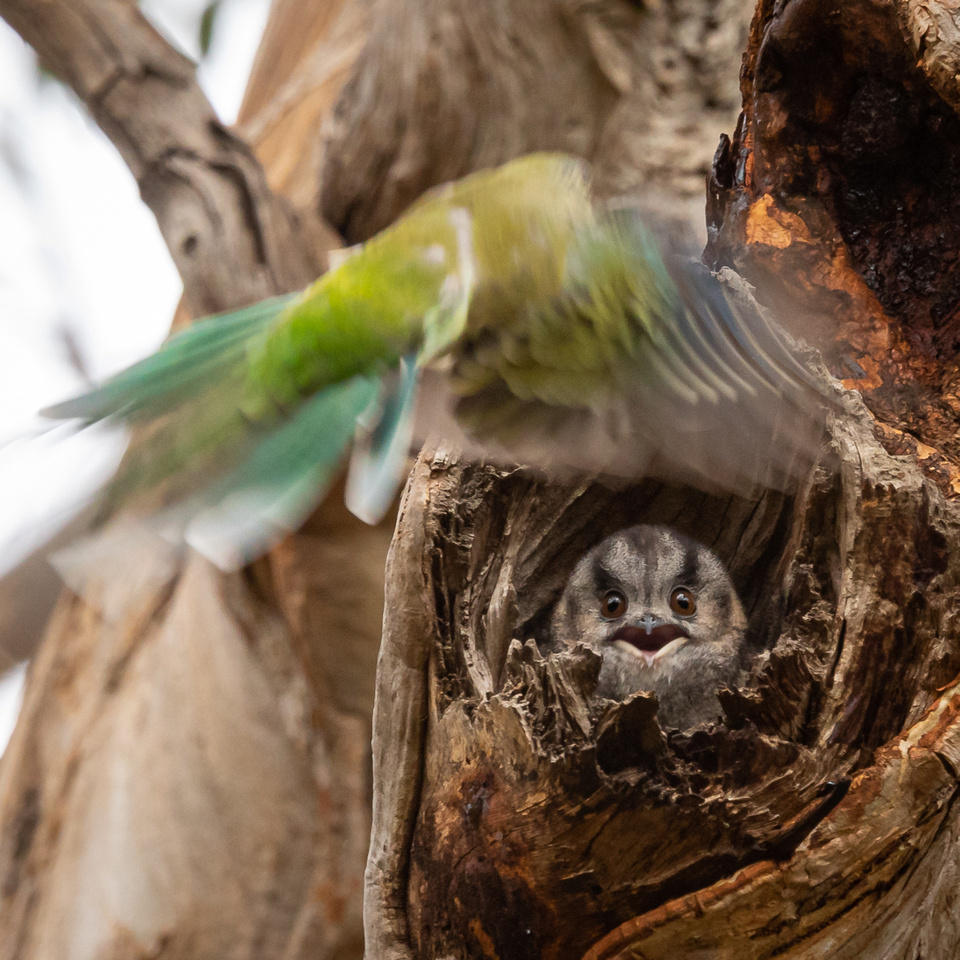 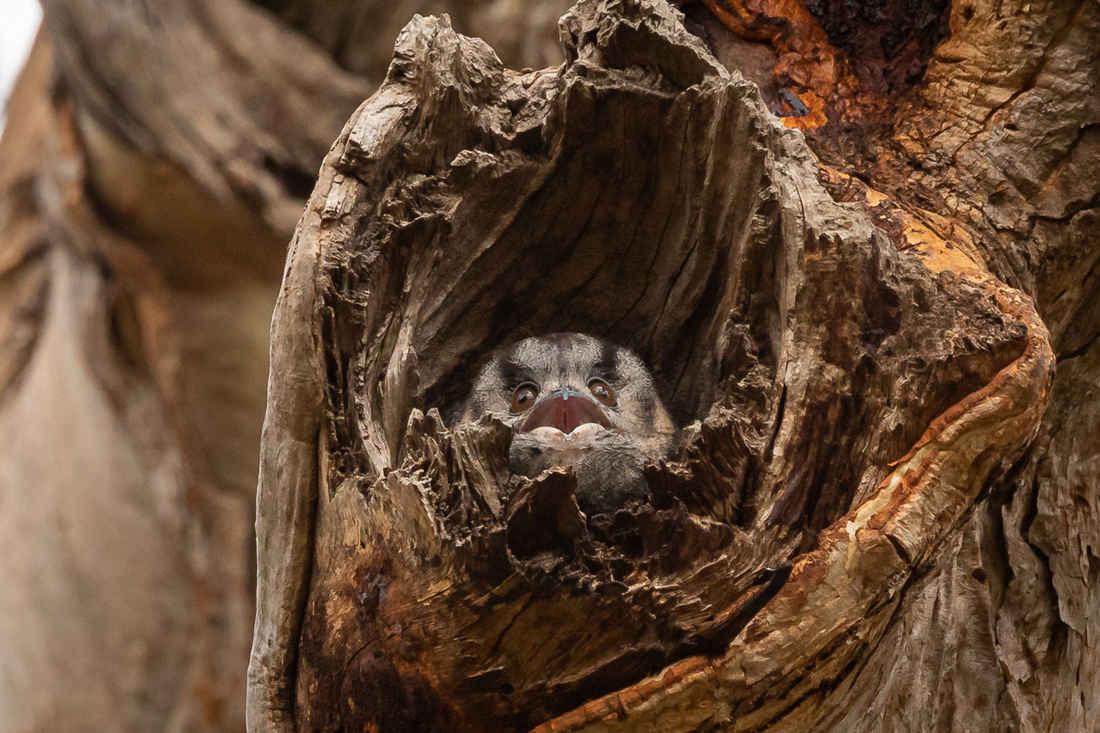 After the excitement as I left the area, I spotted another fungi to shoot, this time I used a small softbox on one of the speedlites. 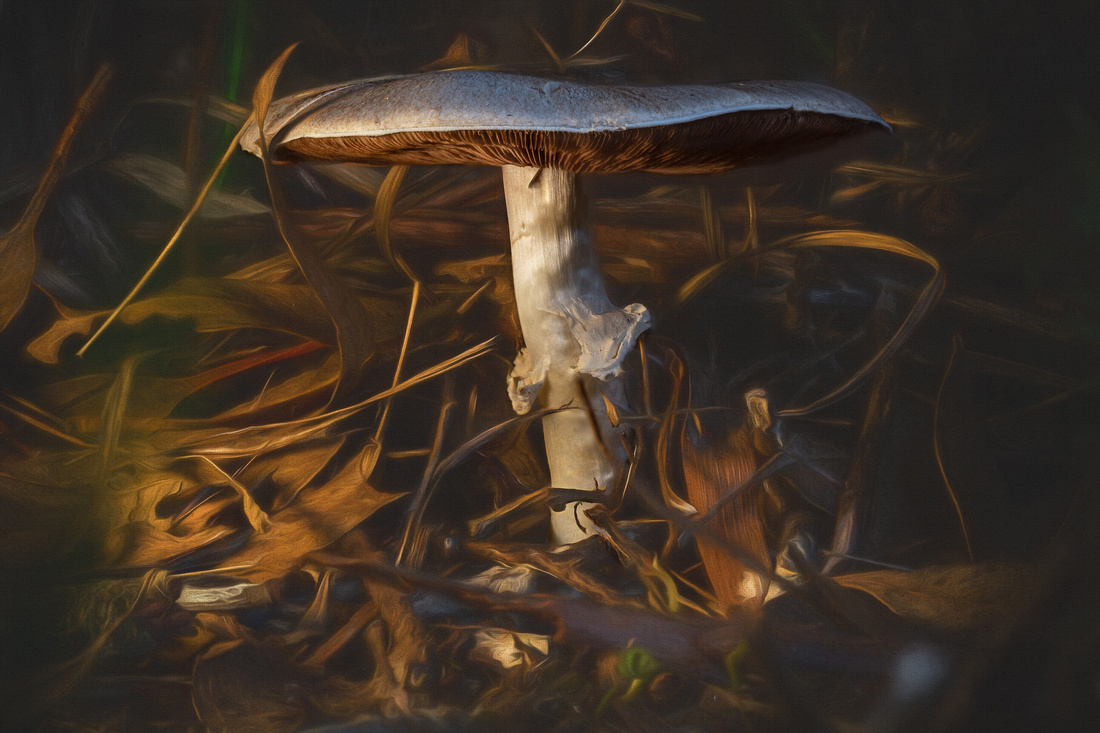 Tried an extra step in the processing of this one with a bit of black and white processing to see how they look, Still think I prefer the colour. But not too unhappy with it. 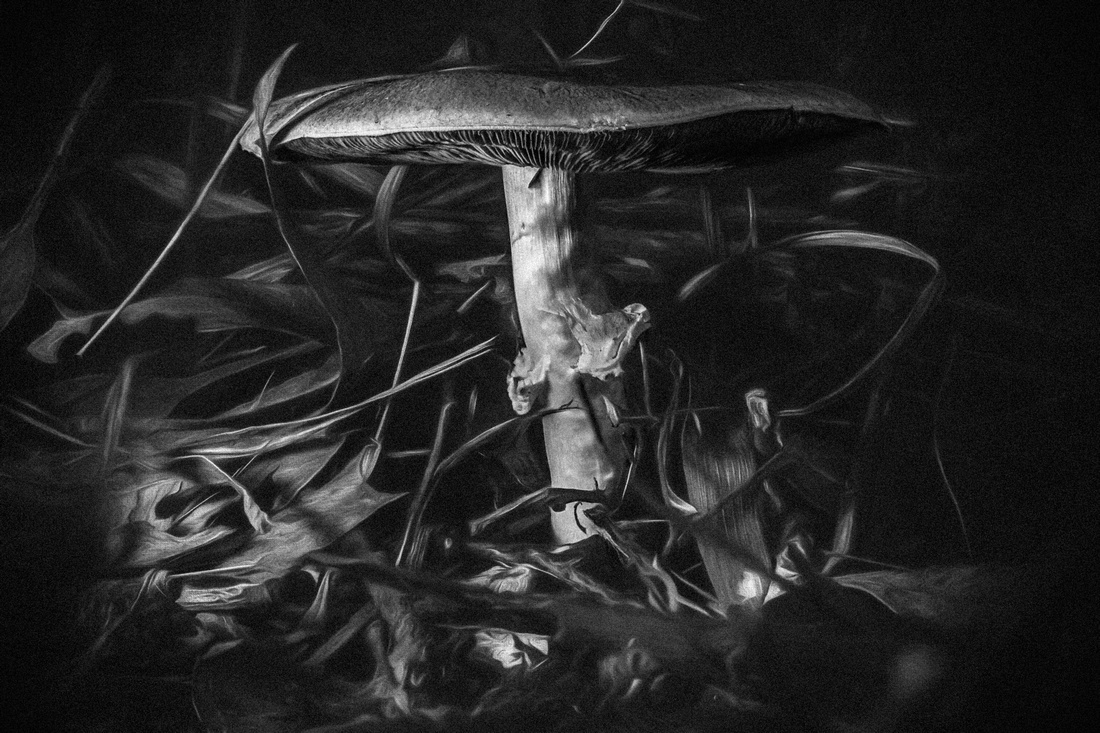 This week it was the Fairy Martins (Petrochelidon ariel) young turn to be feed. So this series shows a sequence as the parent flys in feeding the young while staying airborne. 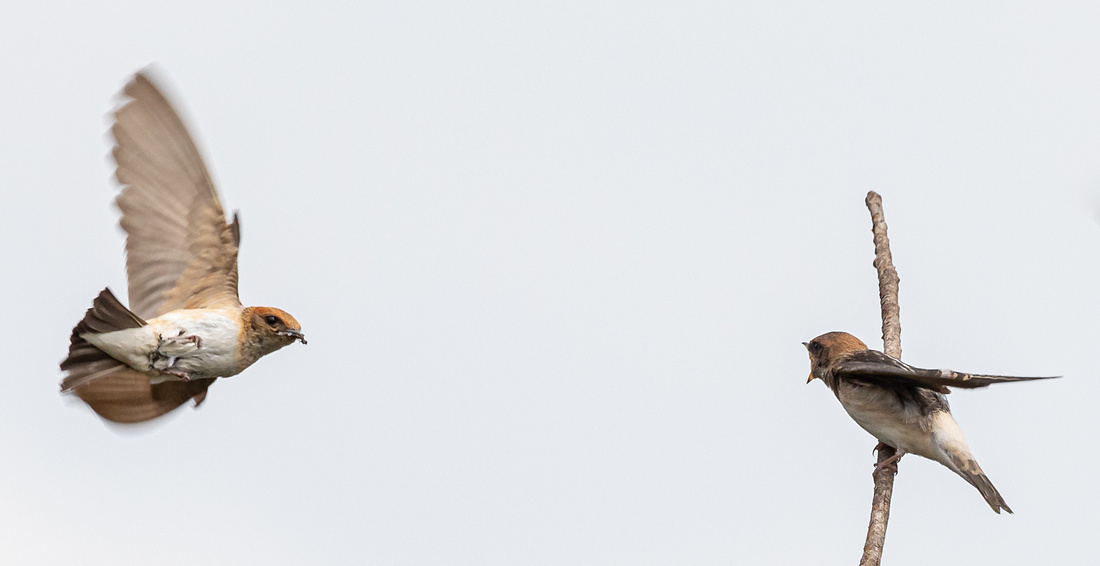 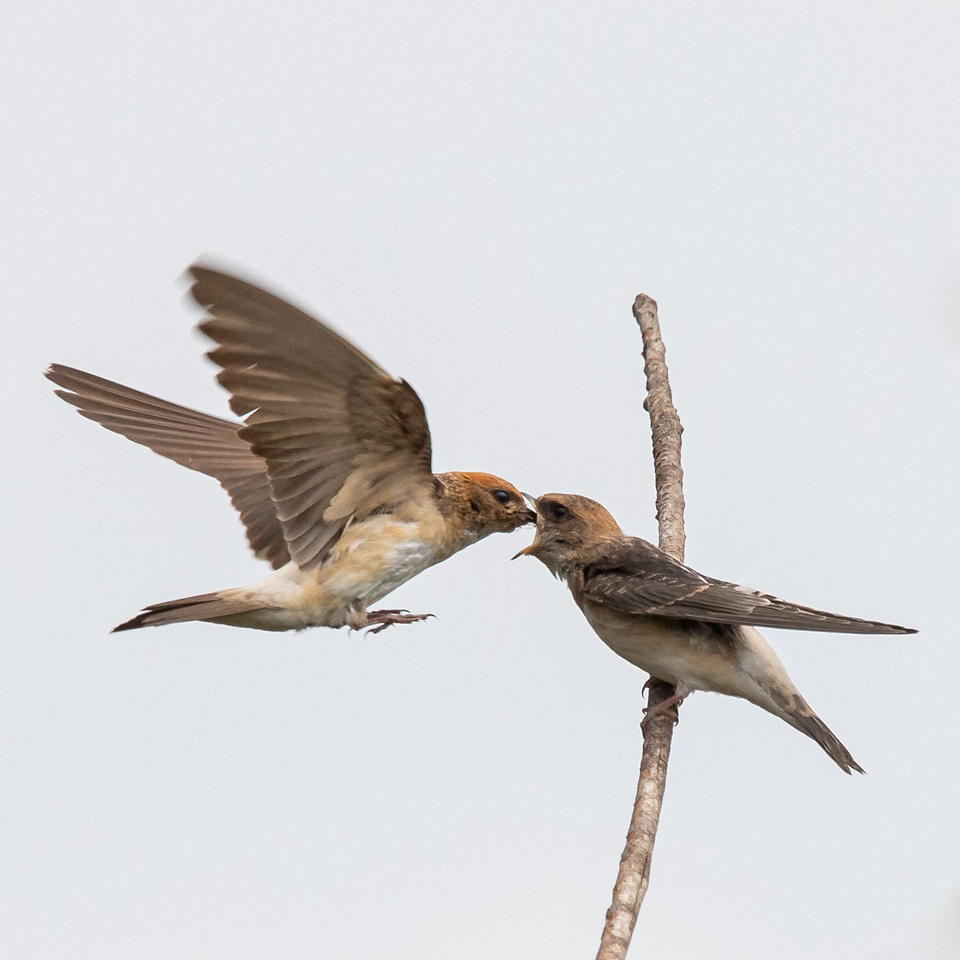 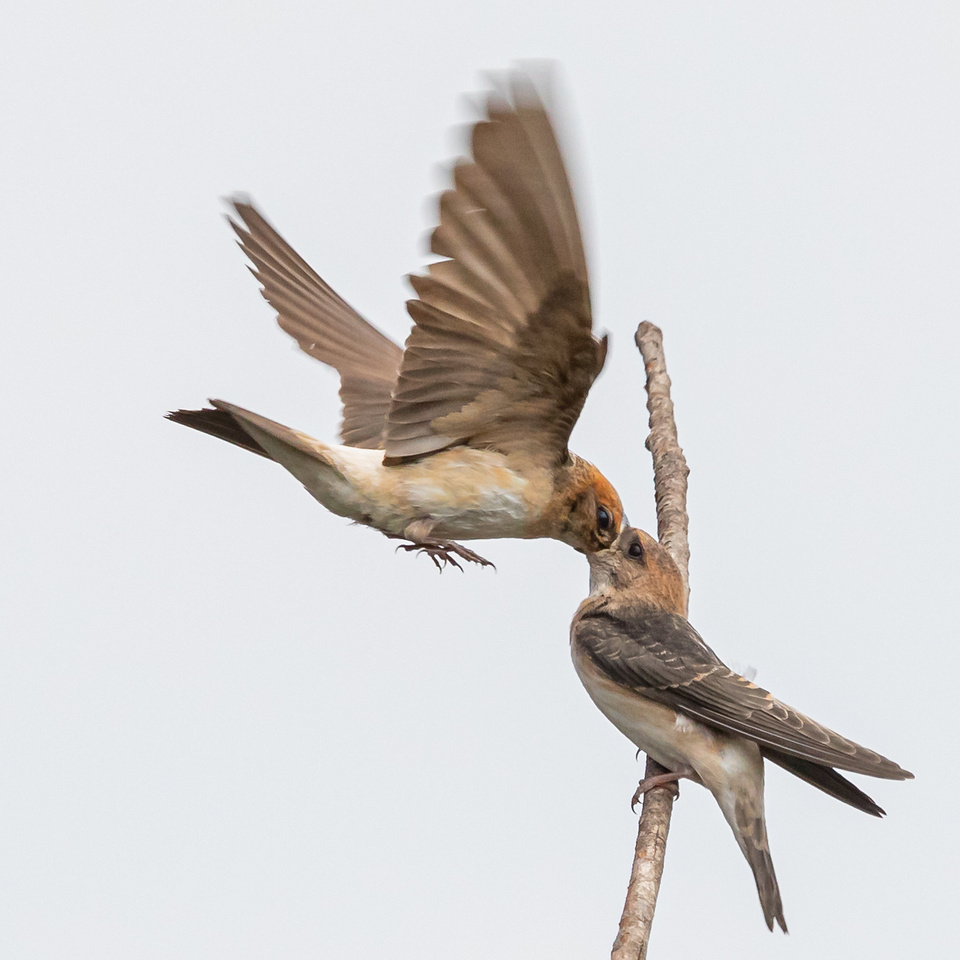 The Welcome swallows (hirundo neoxena) are always about this ones still a young un As its face is more brown than the usual orange. 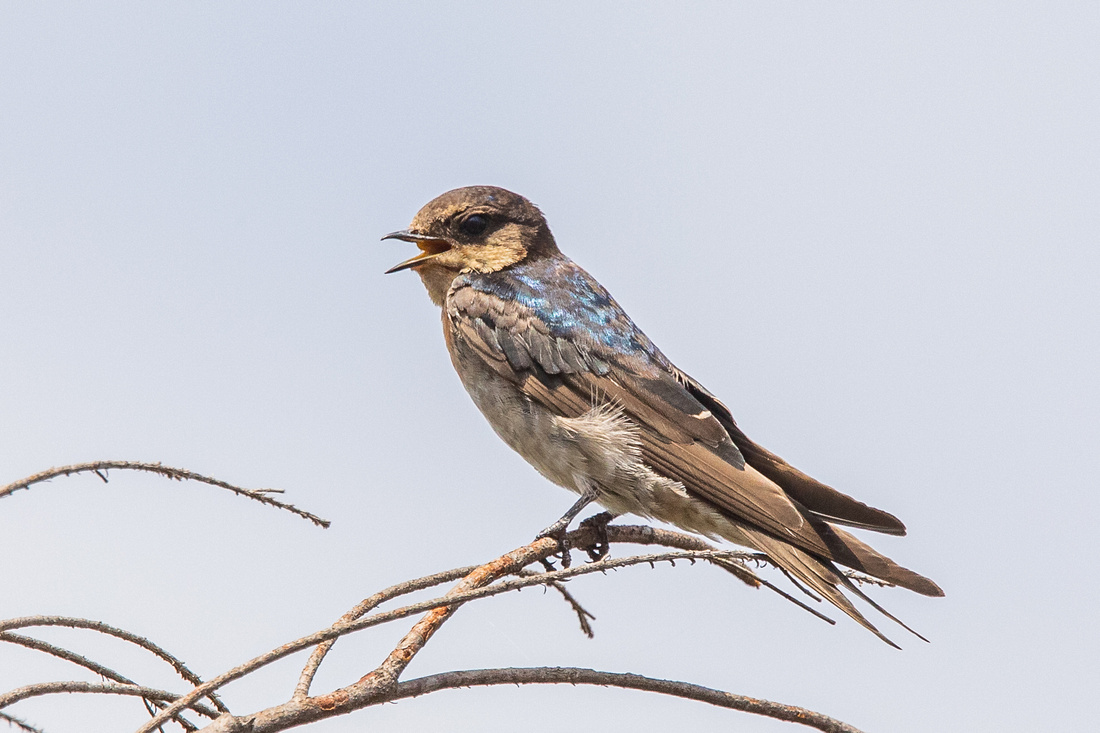 Of late there's been a pair of Royal Spoonbills (Platalea regia) have been about in the gardens, this time they were in separate lakes. 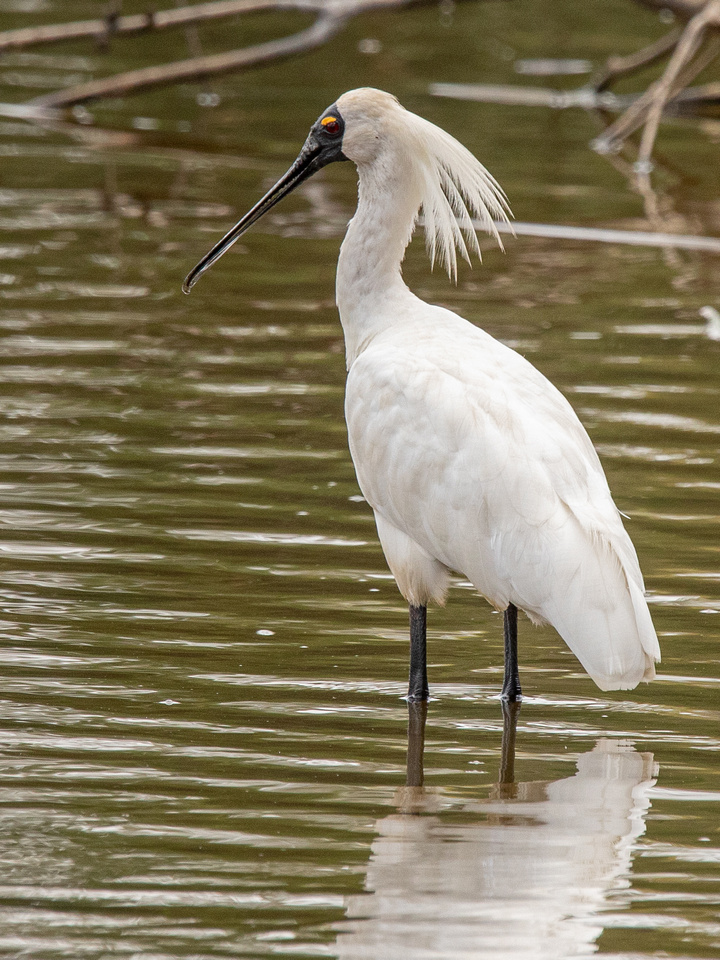 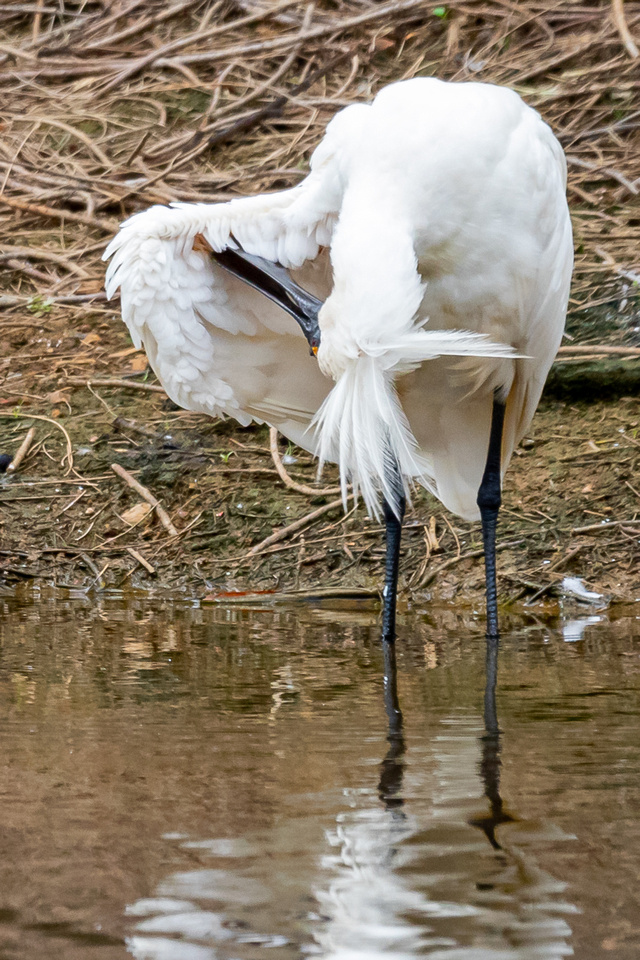 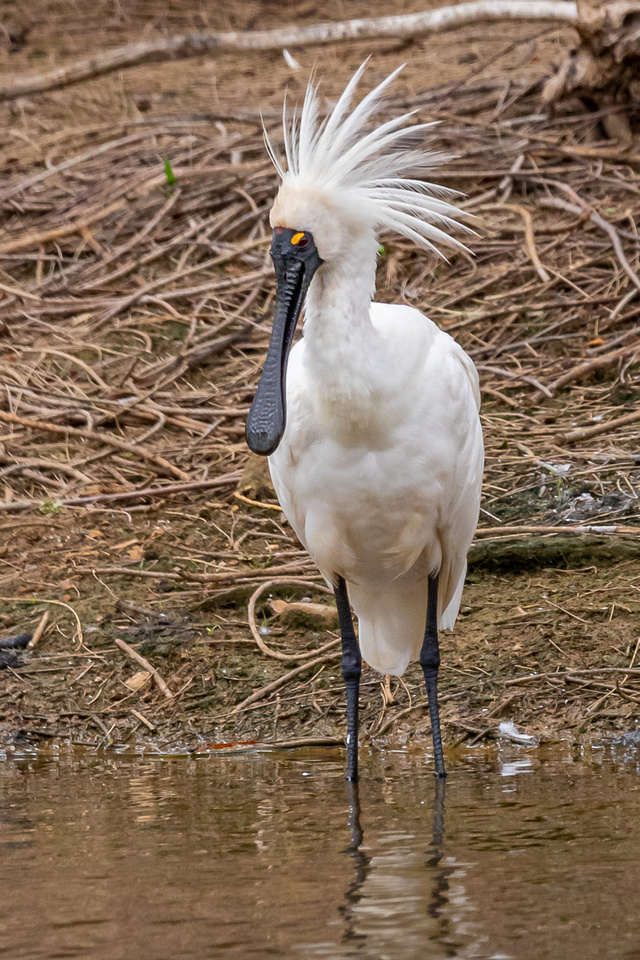 The usual Australian Reed-warblers (Acrocephatalus australis) are still about in the reed beds this one found a moth to snack on. 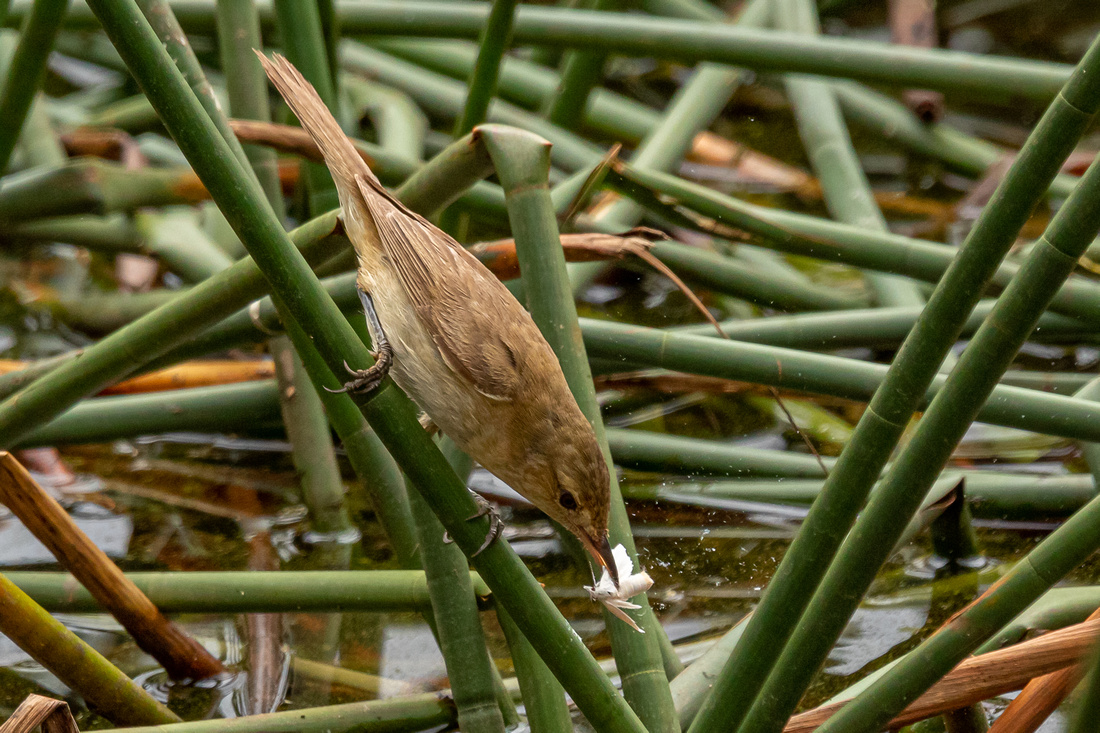 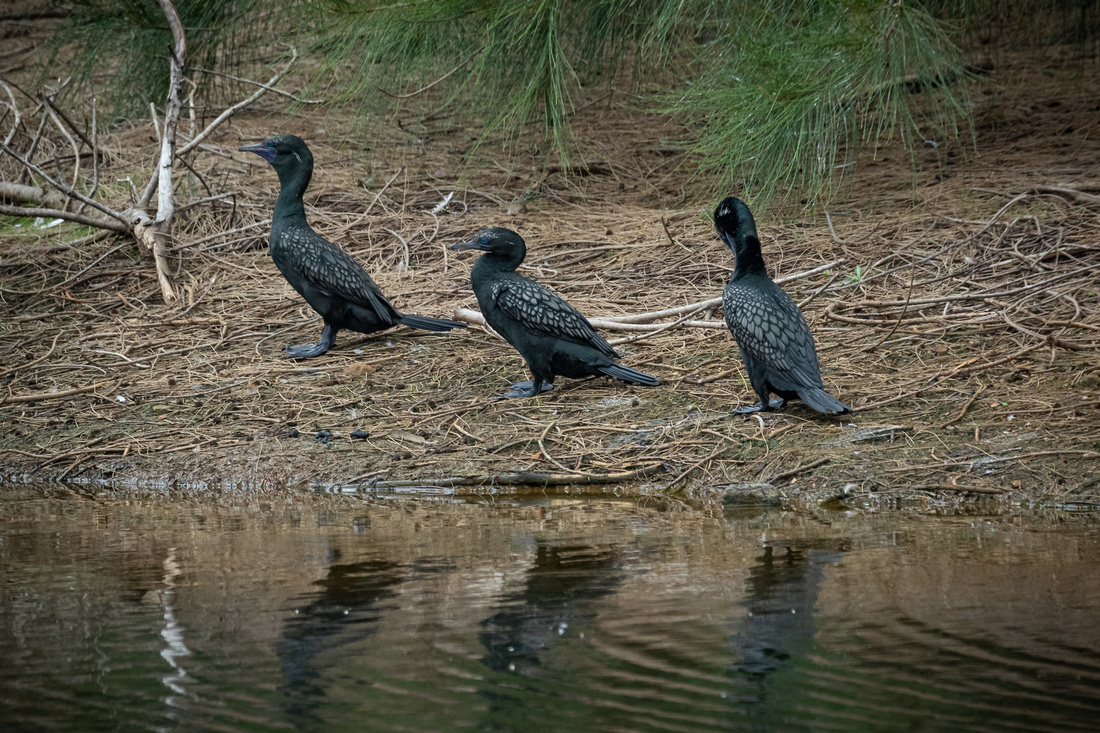 Up until the last few weeks, I've shot most of my birding images with the 7DmkII, but the last few weeks I've been using the 5Dmk4 for the birding shots. The main advantage to the 7dmkII was the frame rate of able to shot 10 frames per second and the crop factor makes a 600mm lens seem to be a 960mm lens, whereas the 5dmk4 has the better image quilty and higher megapixel sensor. So this week I took the next two shots with the two different bodies so see if when both are cropped to the same about which one holds up best. Both shots are taken with the same settings, Lens was mounted on the tripod. I've cropped both images in lightroom so the same image size the 5D image needed more cropping to get the same size image.  The first image is from the Canon 5Dmk4. 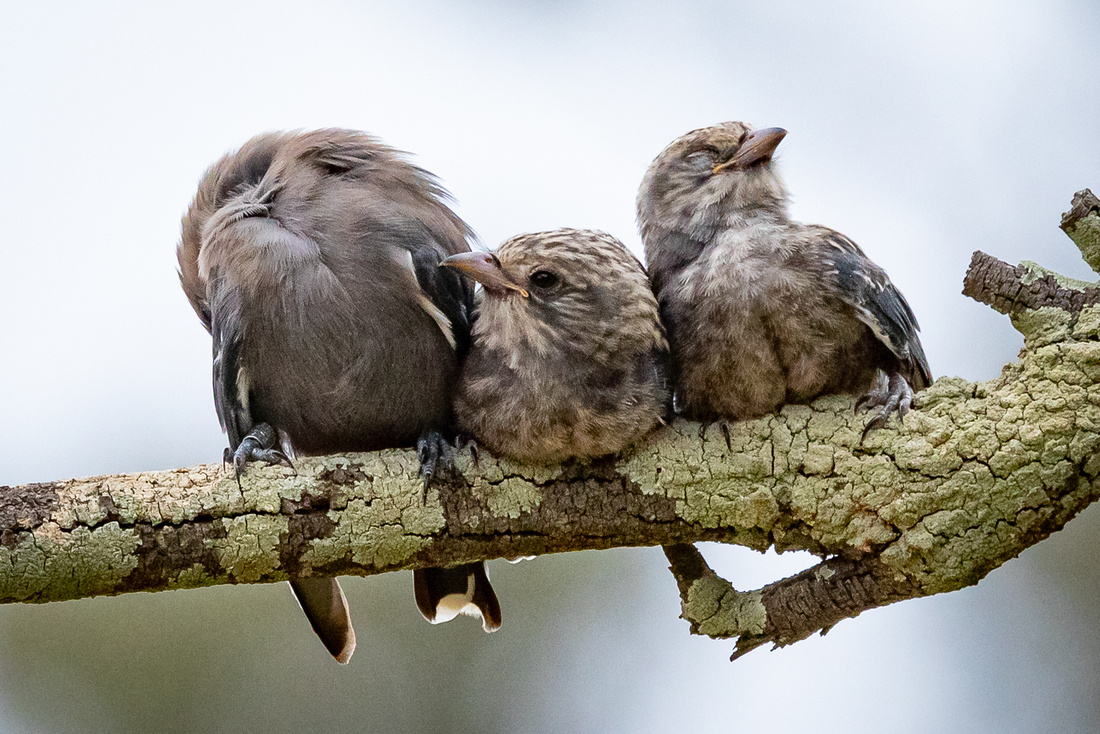 Whereas this image is from the 7DmkII. There's not much between the two images 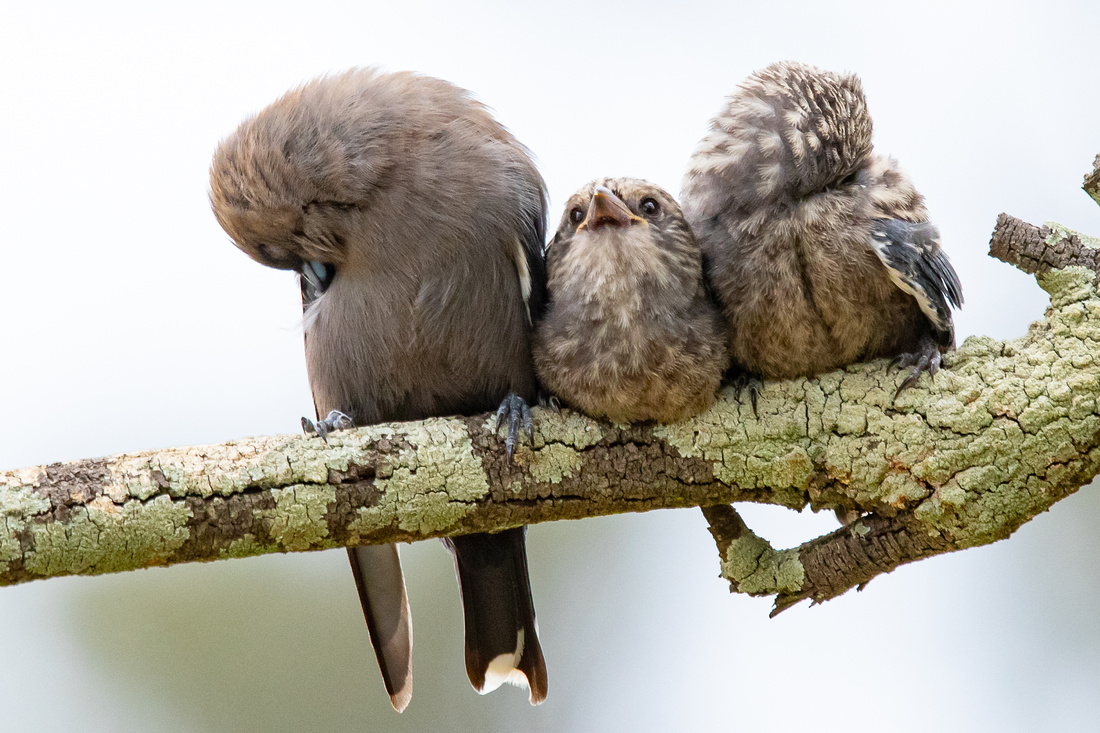 Back in the main carpark, a Rainbow Lorikeet (Trichoglossus haematodus) was feasting on a flowering guntree. 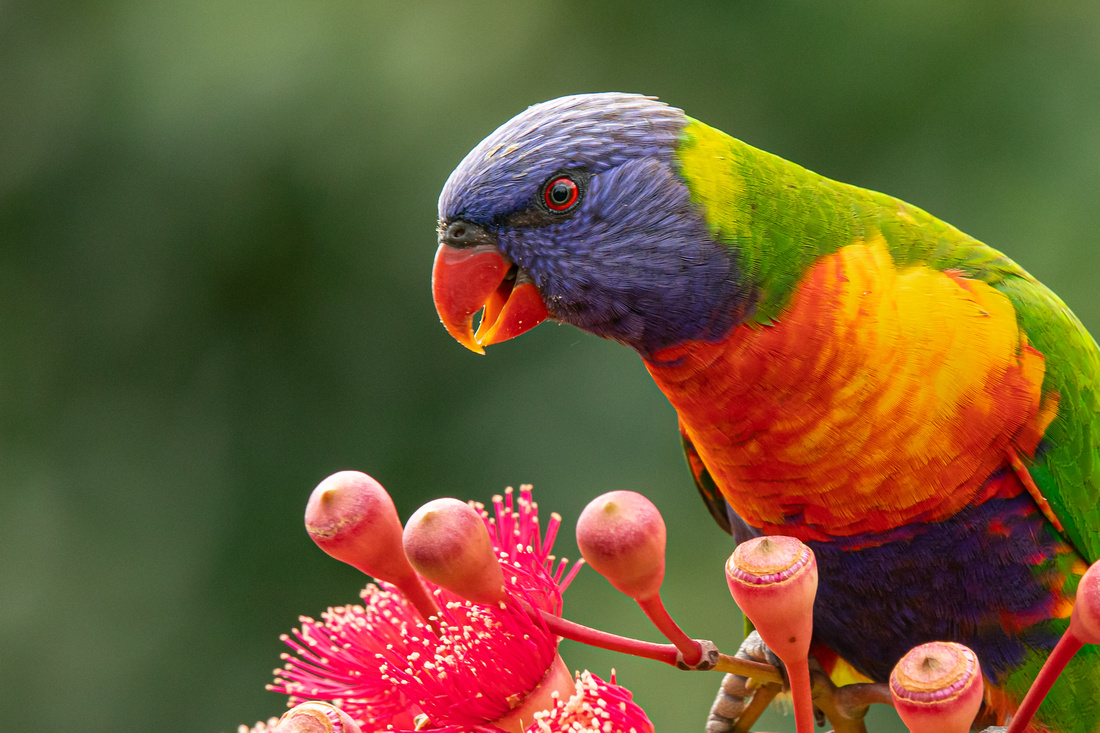 The Little Eastern Yellow Robins (Eopsaltria australis)are in the gardens year-round, but always pose for a shot. 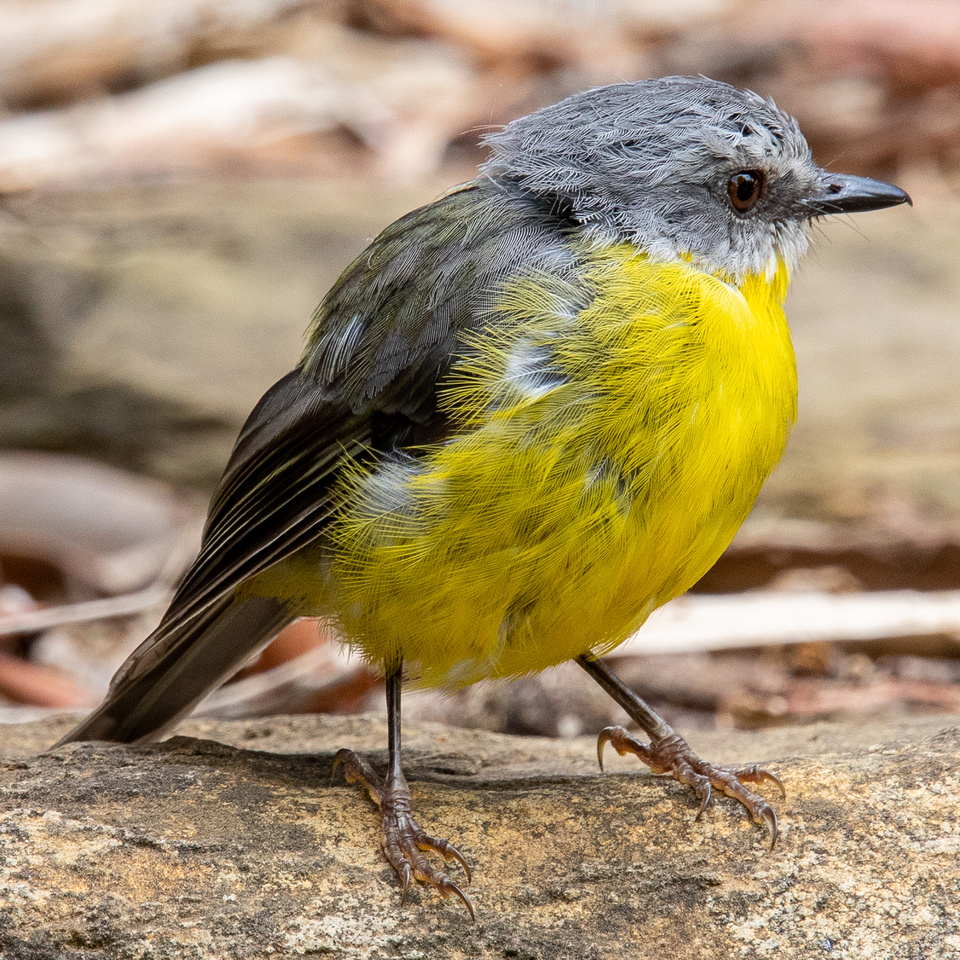 Back in the Main carpark and a Noisy Miner (Manorina melanocephala) was also in posing mode in amongst a Grevillea. These are native honey honeyeaters. 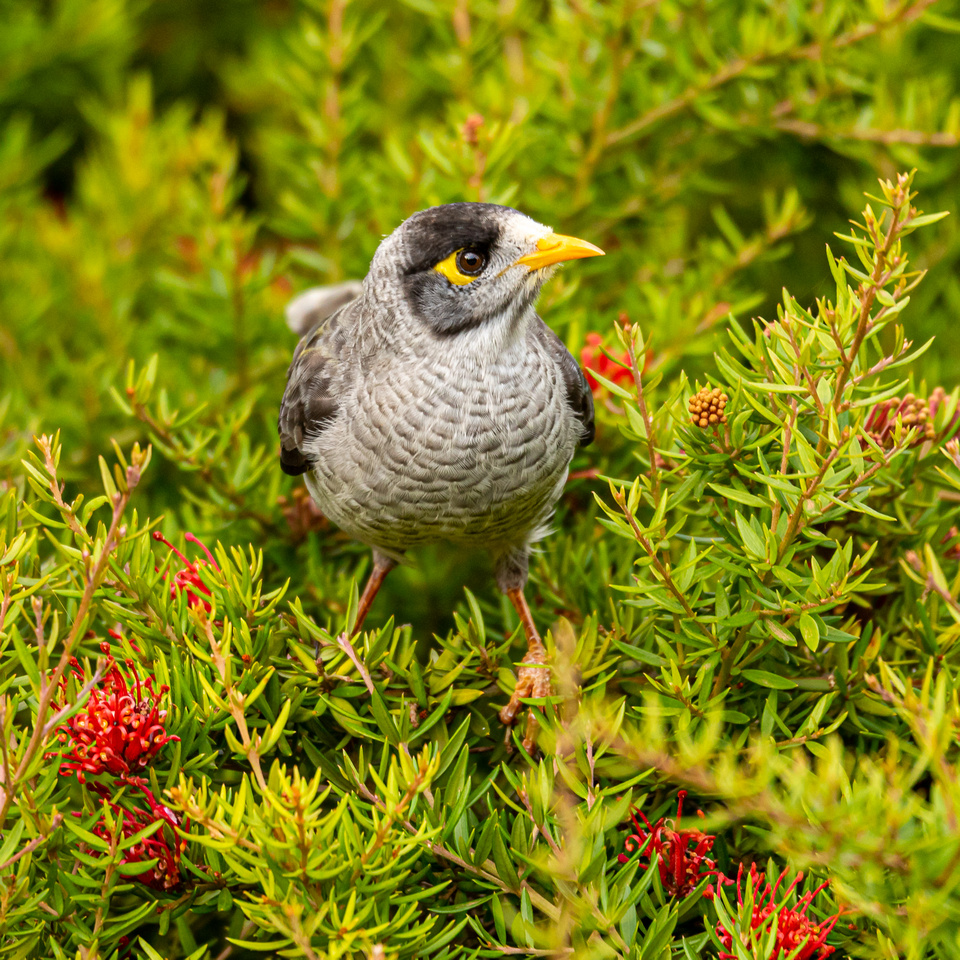 As I was driving out there was this small group of Wallaroos, On hot days like this one they lick they forearms where there are veins running which as the airflow hits the wet areas acts as evaporative air conditioning allowing them to cool down, ones using this technique in this shot. 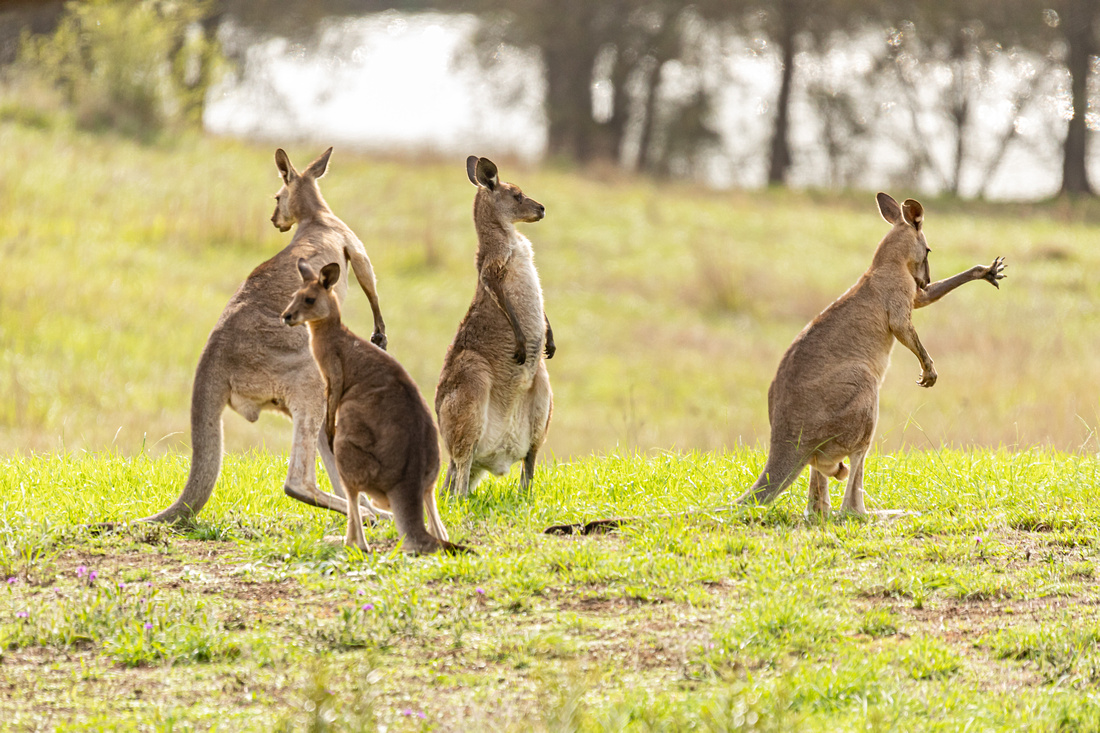 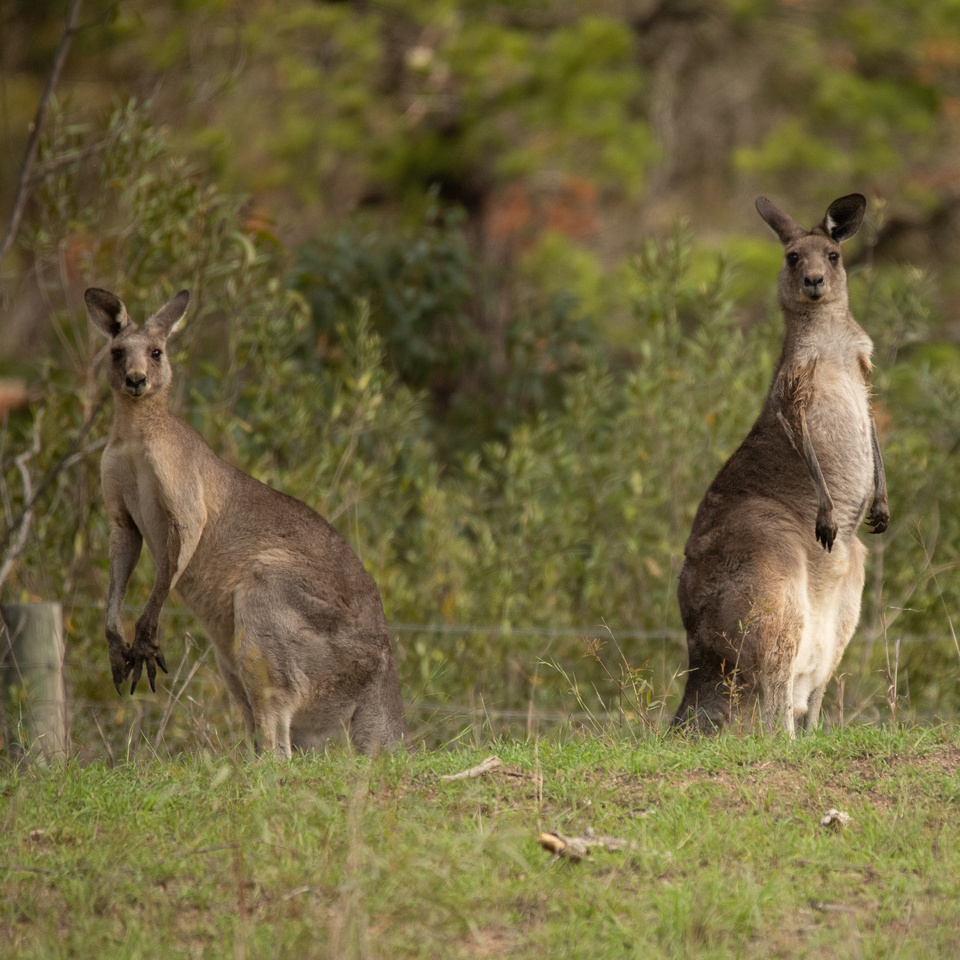 Last shot of the day is of a little Black-fronted Dotterel (Elseyornis melanops) there are several pairs of these on the shores of the lakes in the gardens look for them on the mud flats they are tiny so easily missed. 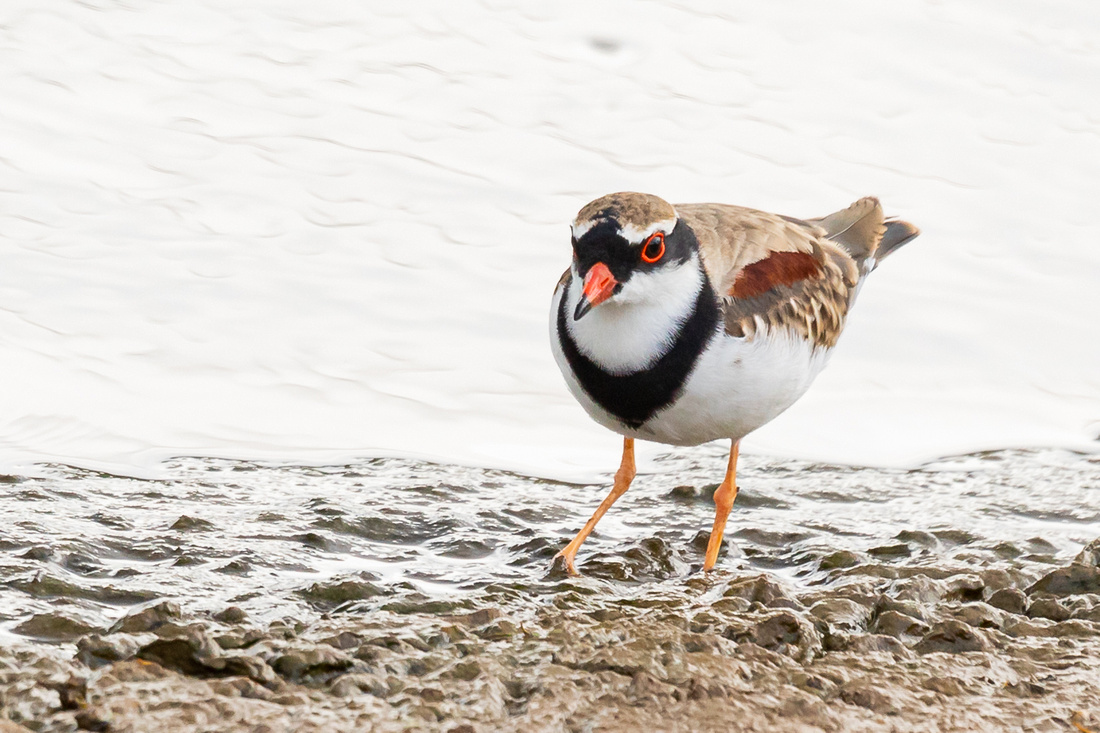 So that wraps up this week's shots out of the Australian Botanic Gardens.

With the new year starting now the first of my workshops in the gardens is now open for books via the garden's website, link here.

There are still a few places left for this Sunday 9th Feb. 2020.

This one is aimed at beginners so someone that's just got a new camera or wants to learn about the effects of aperture, and depth of field, shutter speed how to freeze or blur motion etc then this would be a good start, March there will be an intermediate workshop, this year I'll also be running a mushroom photography workshop in Autumn and of cause, the usual bird photography workshops will be running, so keep an eye out for upcoming workshops I've also added a workshop tab on this site now so you can follow along there for upcoming event as well.

Thanks for dropping by my blog hope to have it back to a regular blog post again this year.