This weeks blog post is a walk through of this weeks walk thought the Australian Botanical gardens, Mount Annan. This week I started off at the plant bank. This first shots of a Little Pied Cormorant (Microcarbo melanoleucos) in the small dam opposite the plant bank. this one was about to take off so just got this shot a few to many small sticks in the shot but the black feathers against the green background make a pleasing shot still. 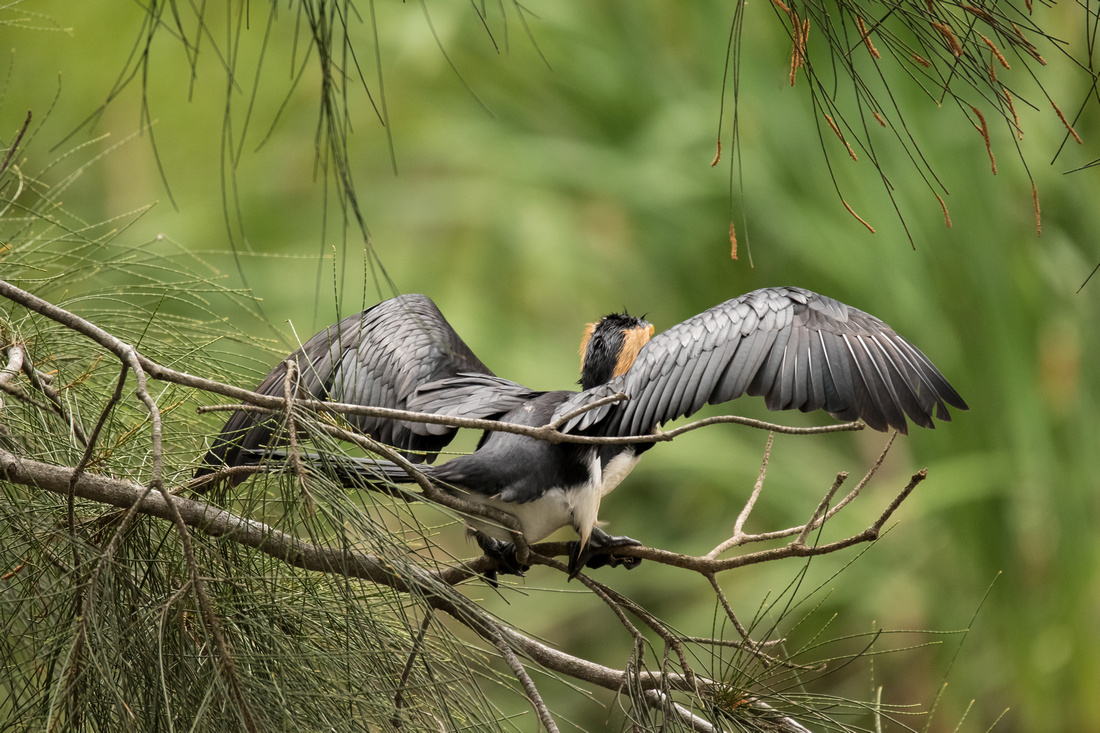 Walking around the dam, I caught a glimpse of a blue flash. Looking around I spotted a small kingfisher as I got closer it took off again and landed on the far side of the dam where there is no access so this was shot four the opposite side of the lake. Not 100% sure but I believe this ones a Forest Kingfisher (Todiramphus macleayii) This one, since was so far away was pretty heavily cropped in, so the image quality isn't the best. But does show of the wide variety of bird life in the gardens. 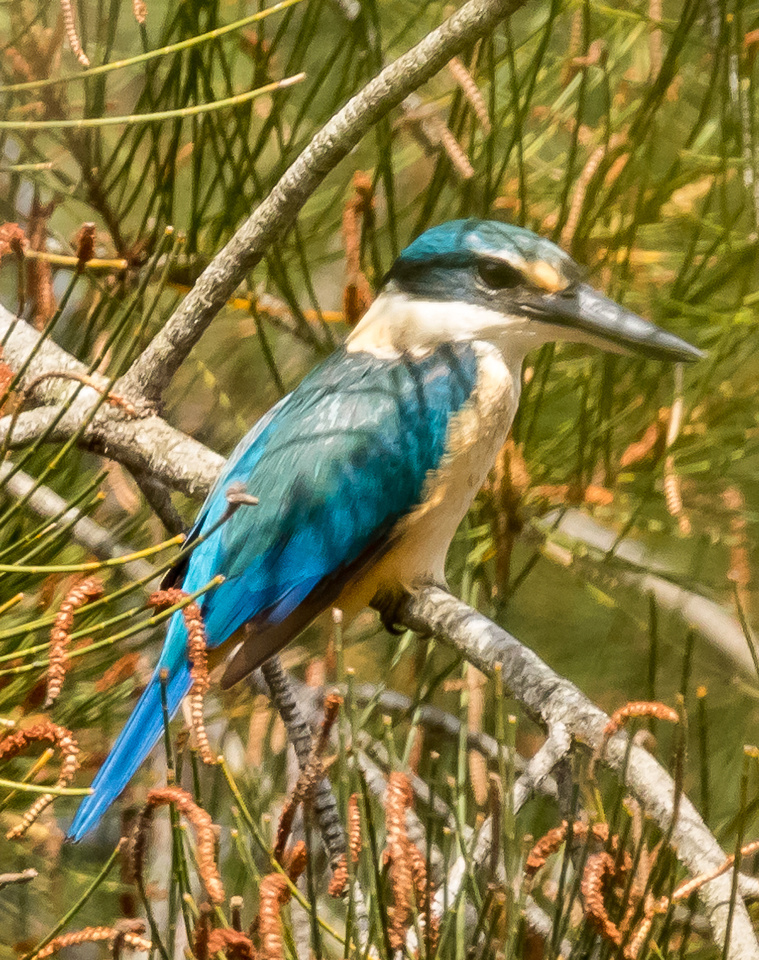 Another bird I came across was this Mistletoebird (Dictum hirundinaceum) This one didn't want to co-operate so I didn't get a clean shot of this one before it flew off. 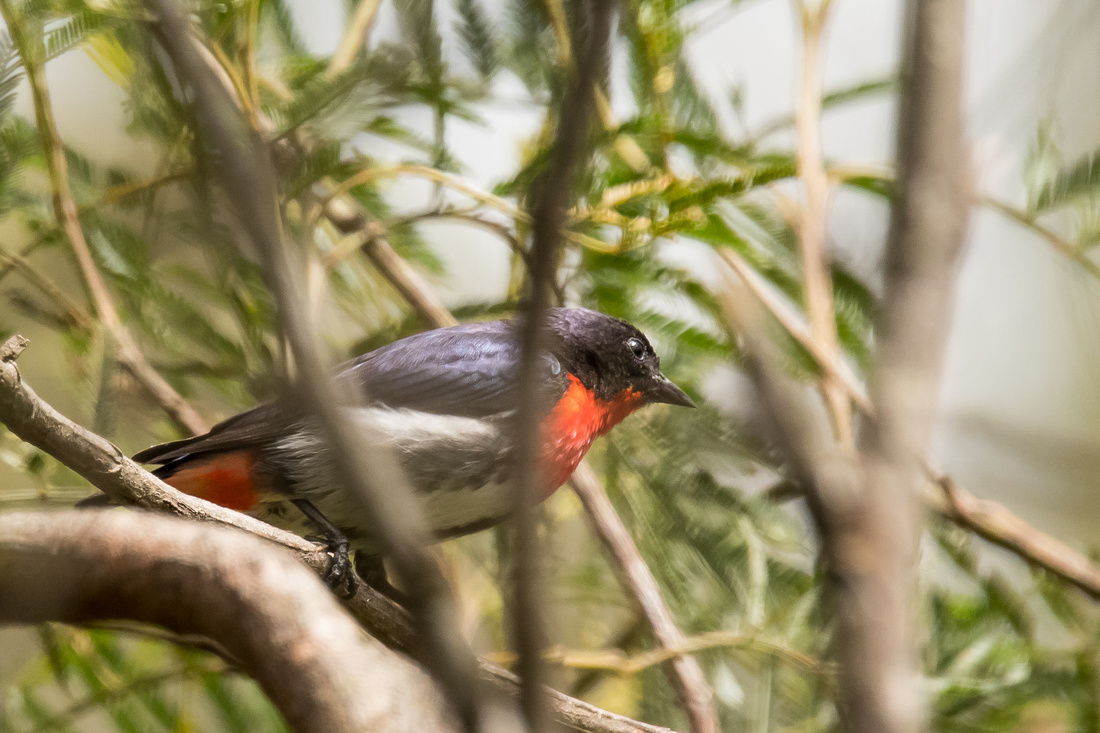 This next series of shots is of a Galah (Eolophus roseicapilla) exploring a hollow, again you can see why a Galah is gray in these shots, they really match the tree in these shots. 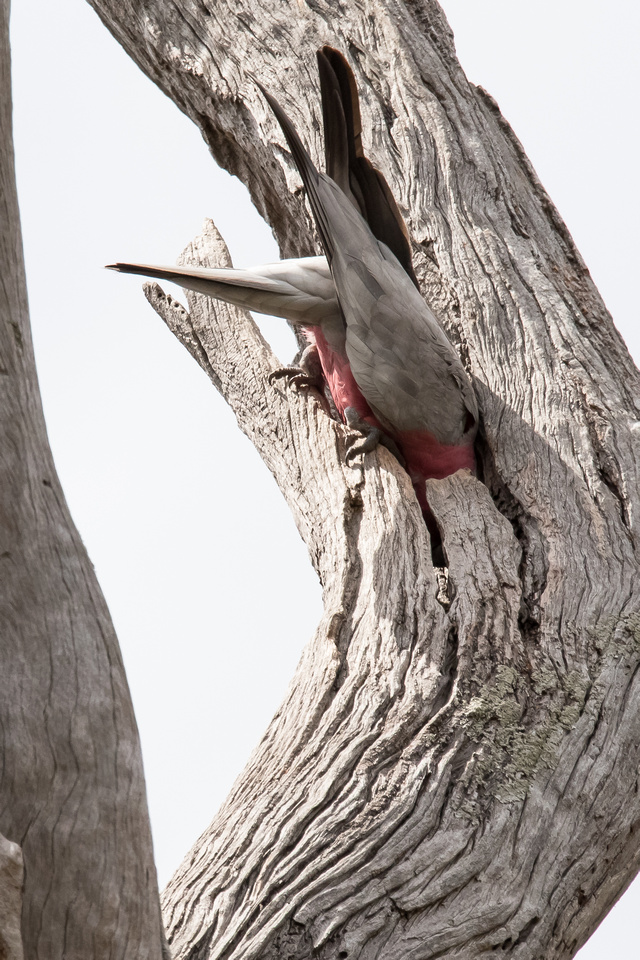 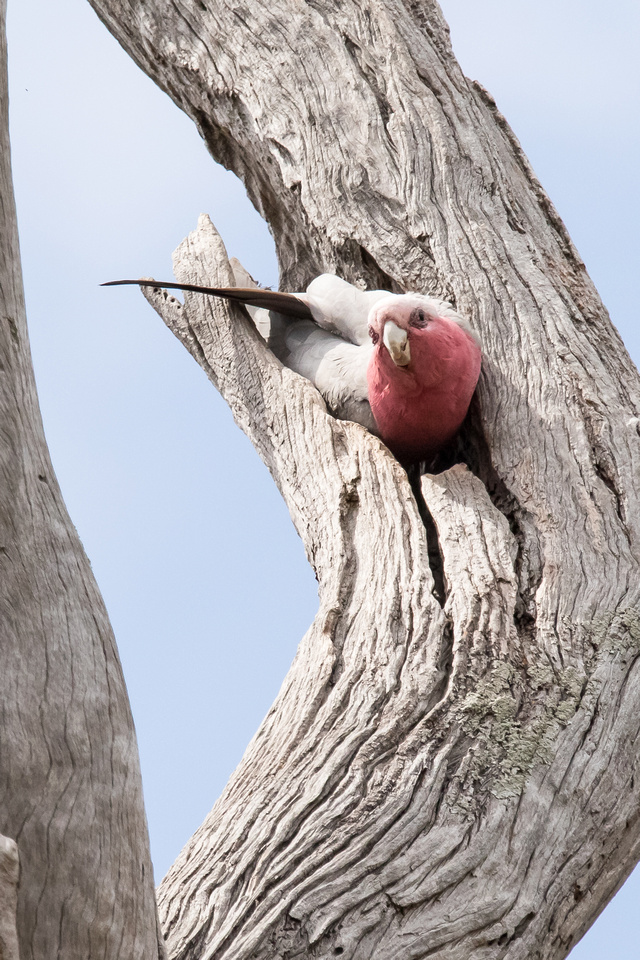 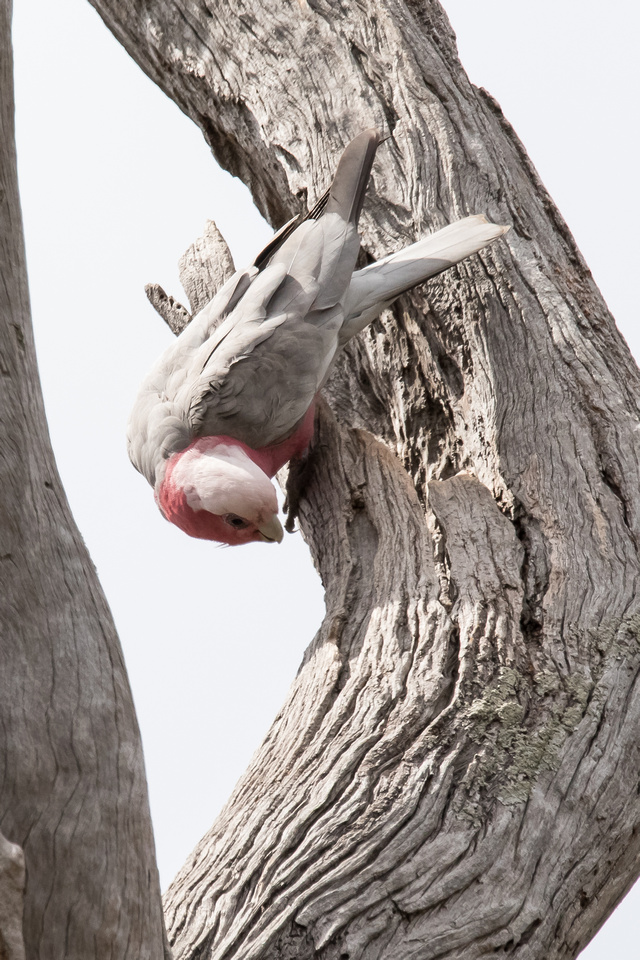 Now the weather has started to warm up so have the reptiles in the gardens, so watch here your walk if walking about now the weathers warmed up, this ones a Red Belly black snake, one you'd know about if it took a fancy to you. But if you stay still they generally move off out of the way. 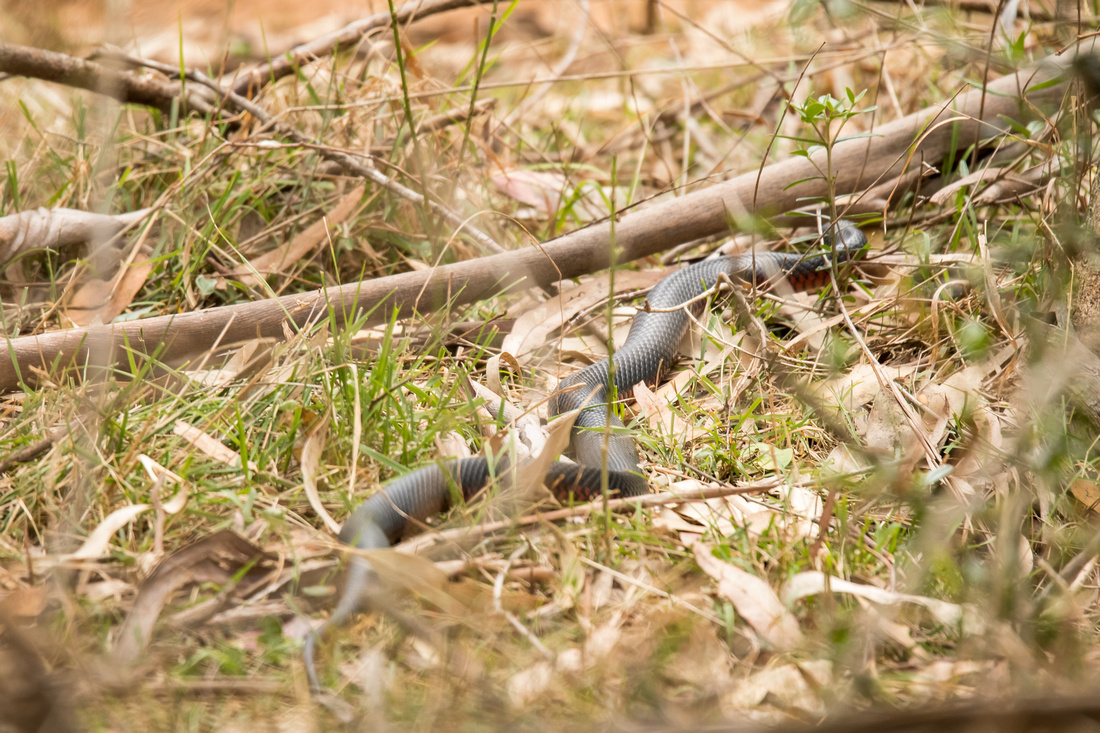 Walking along the path after the snake has moved on I came across this Bell Miner (Manorina melanophrys) this ones face looks like he is none to happy. 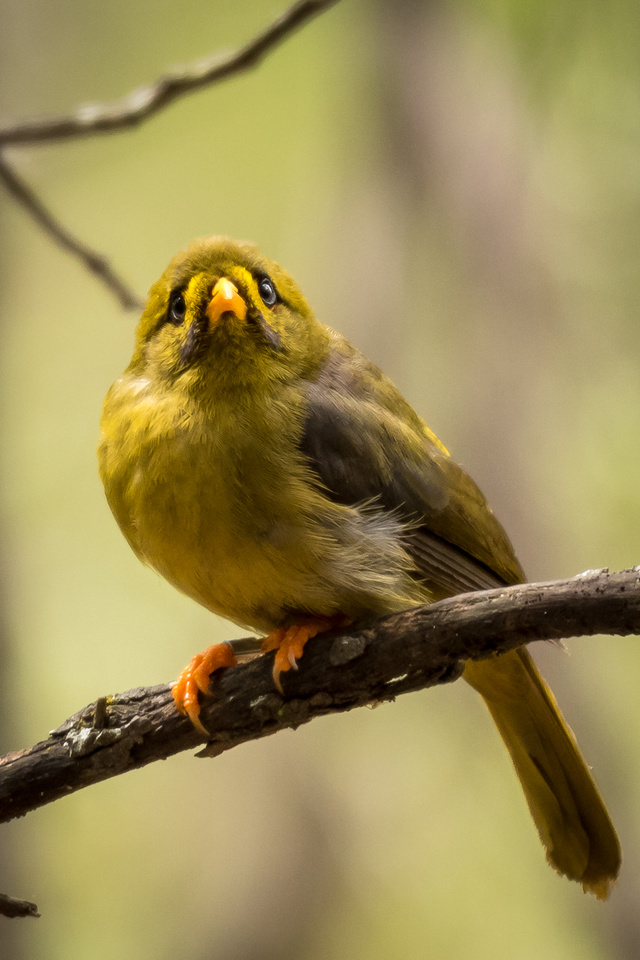 A Kookaburra (Dacelo novaeguineae) was being moved on by the Bell Miner. You can see the miner coming in from the right to move the Kookaburra on, he made several passes often making contact and the kookaburra just sat there unconcerned. It eventually moved on, but seemed more in line with the time of the Kookaburras choosing. 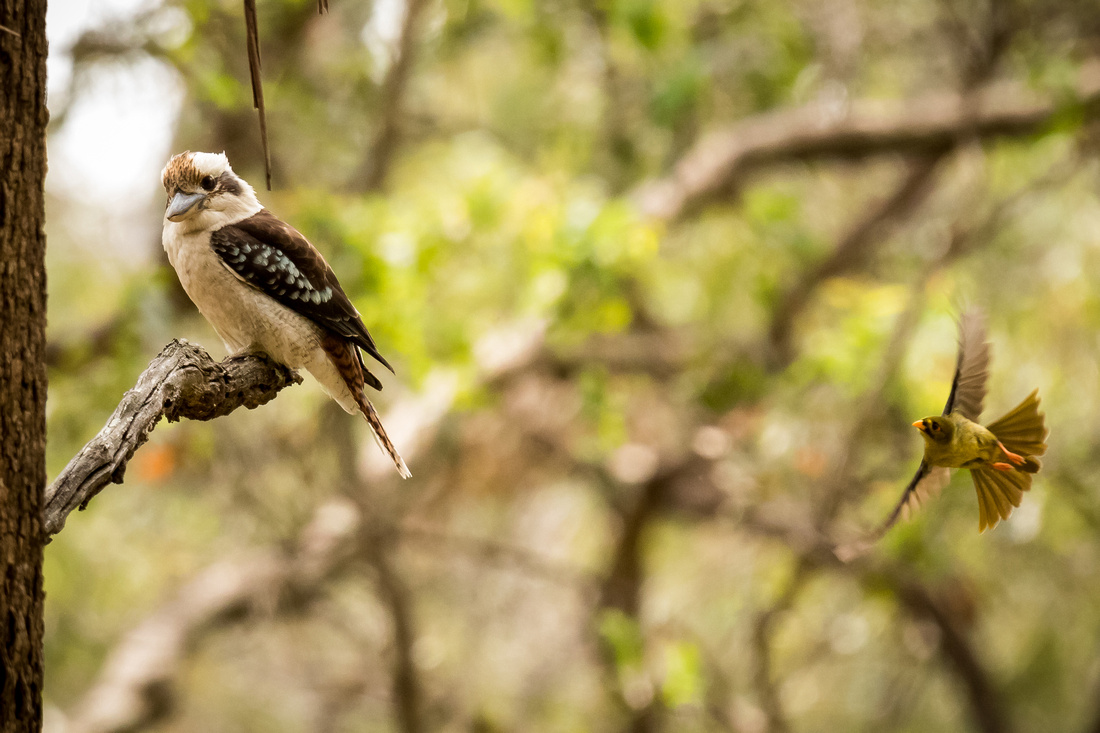 Next up was this Eastern Yellow Robin, (Eopsaltria australis) Theres quite a few of these ones about now all over the gardens. 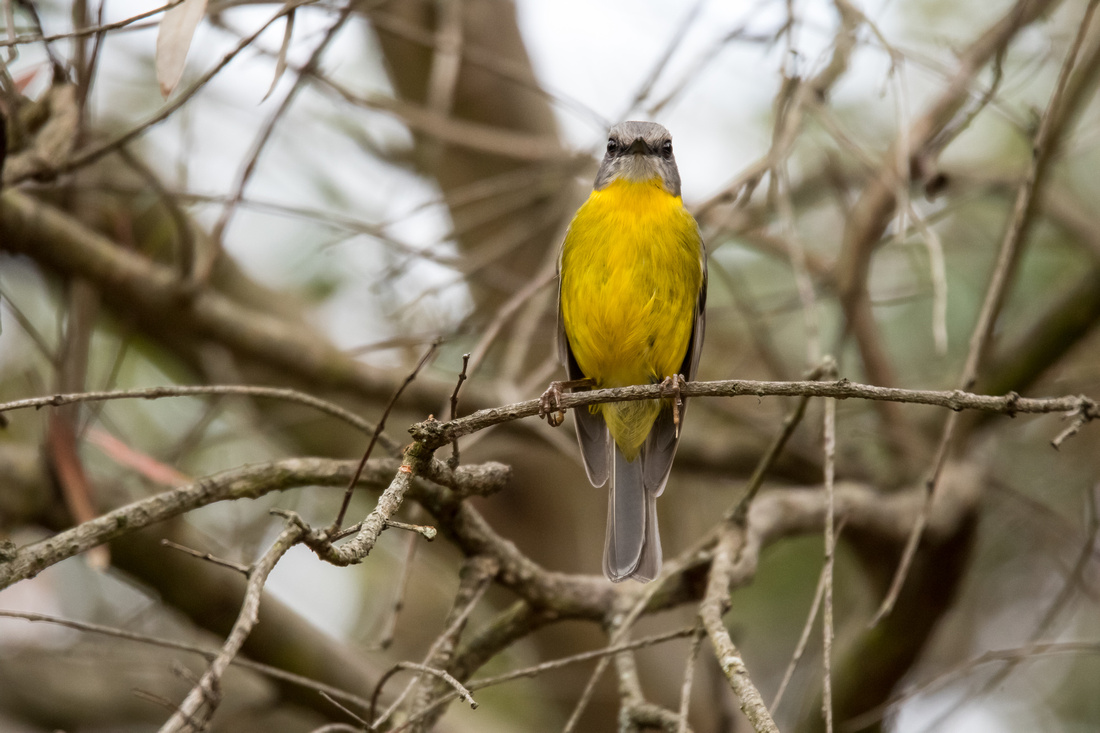 Walking my way out of the Stolen generation walk to the road into the gardens there a gum tree with a few hollows in. It's currently occupied by a Long-billed Corella (Cacatua tenuirostris) and a Sulphur-crested cockatoo (Cacatua galerita) 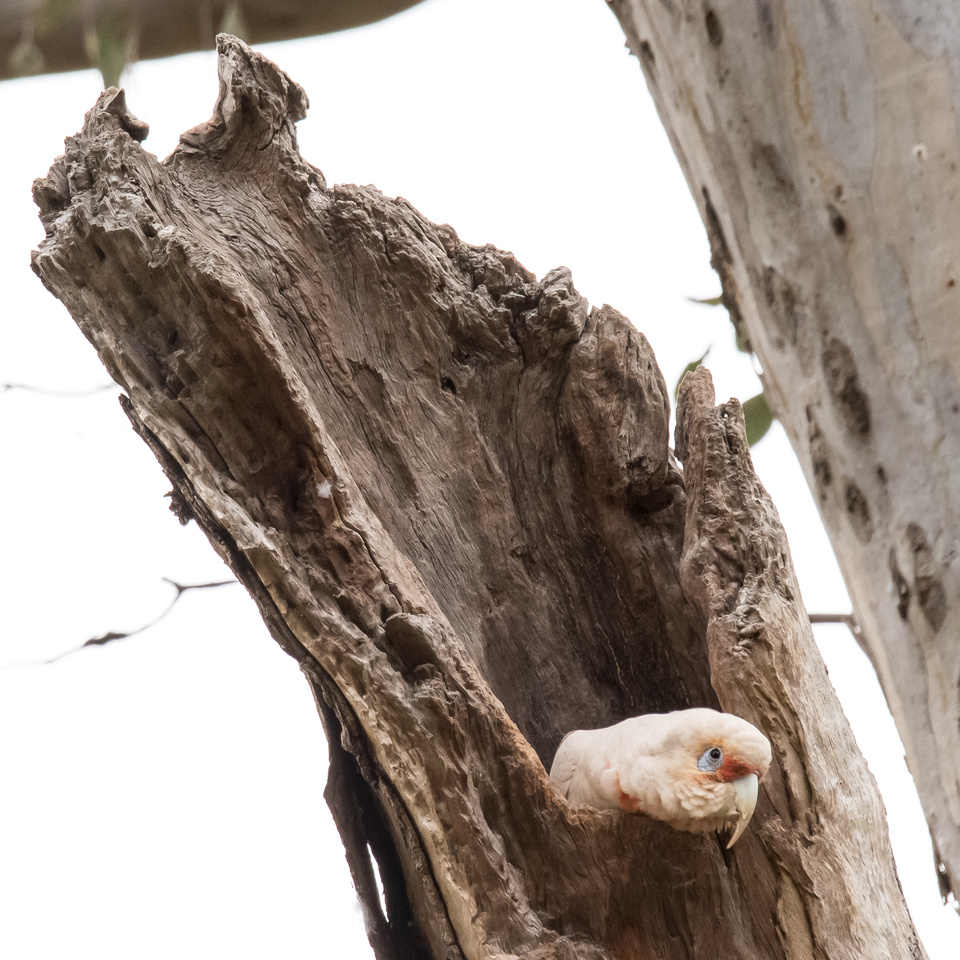 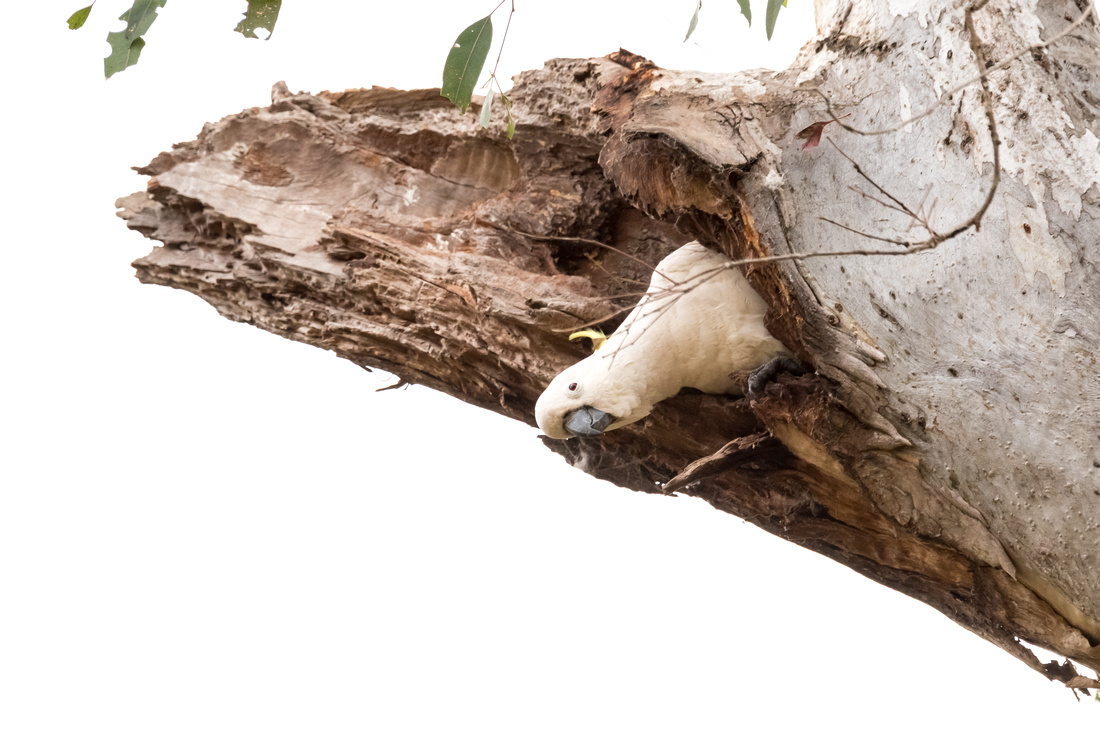 The fledgling Pied Currawongs (Strrpera graculina)   are getting ready to leave their nest now, nearly to large to fit in now. 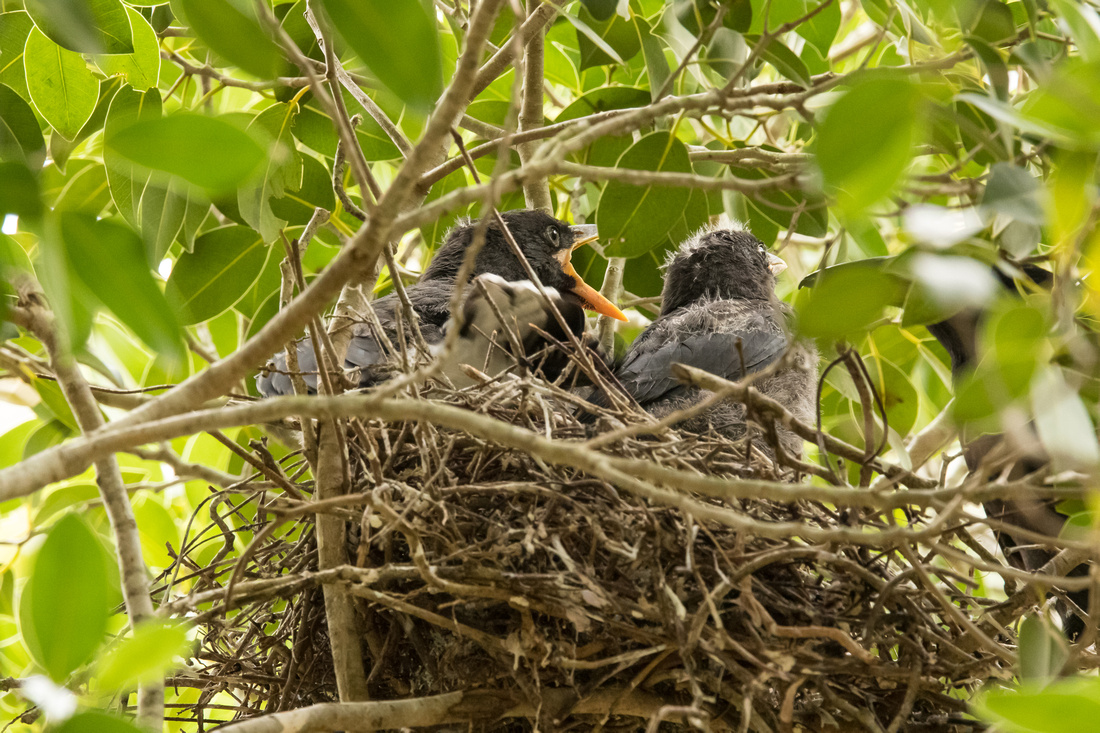 Next up is a series of shots of a pair of Red-browed Finches (Neochmia temporals) siting in a tree after a bath and going thought some feather maintenance. 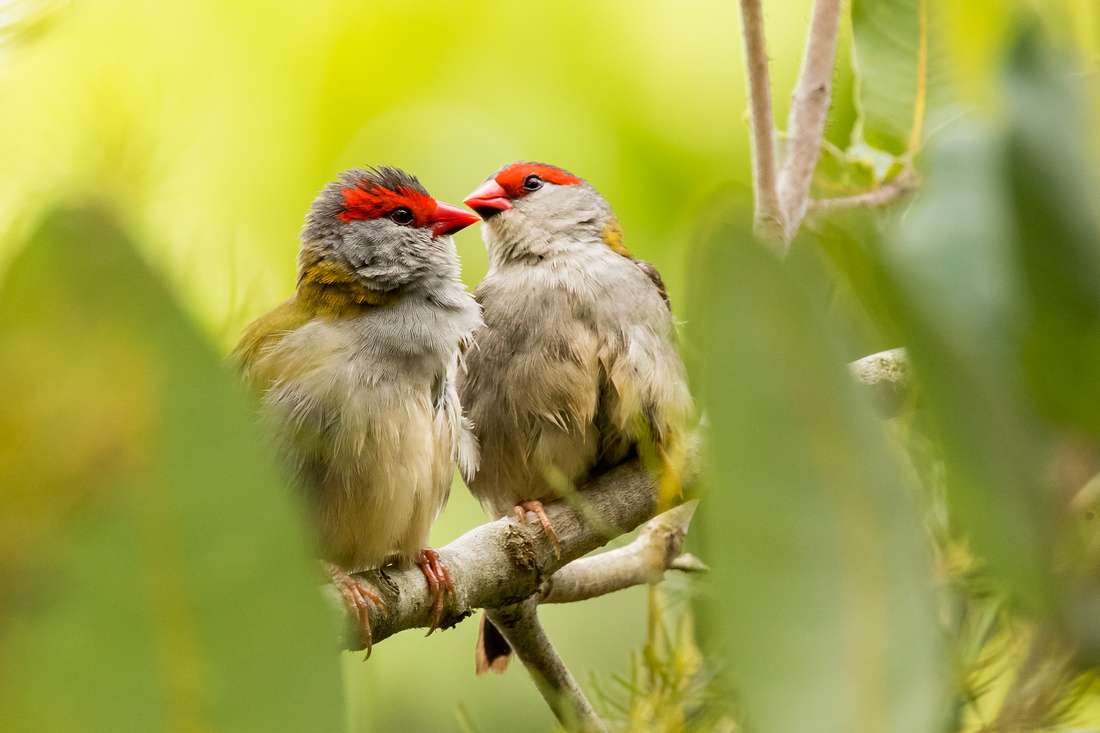 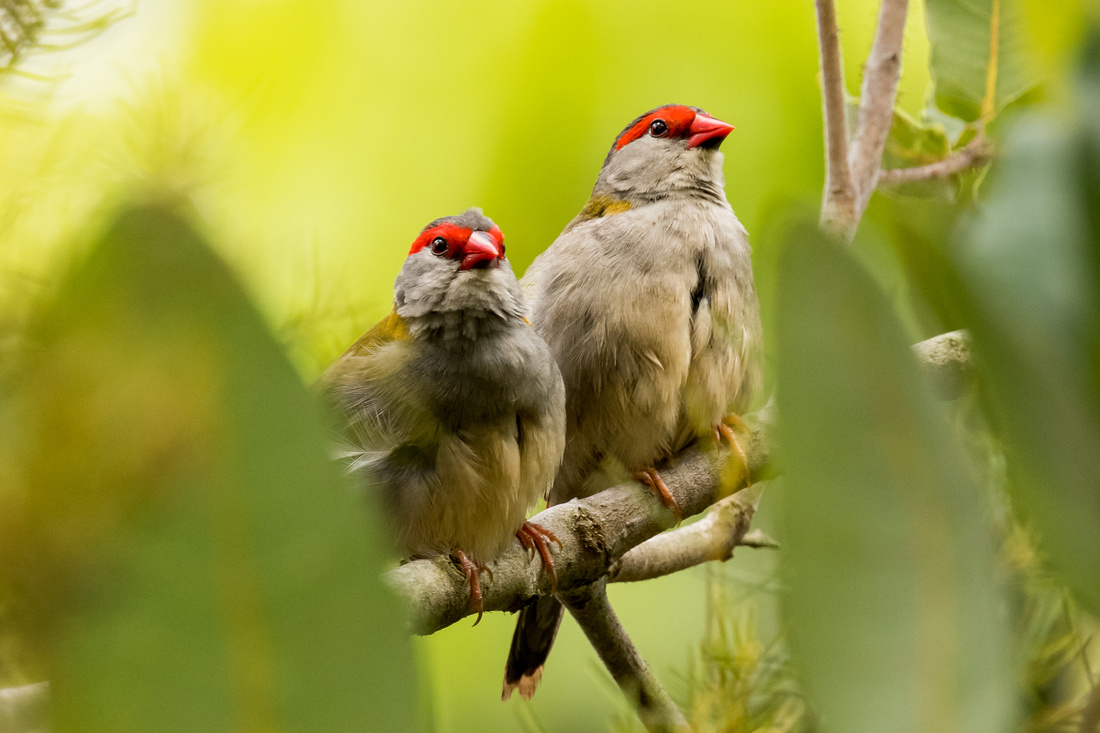 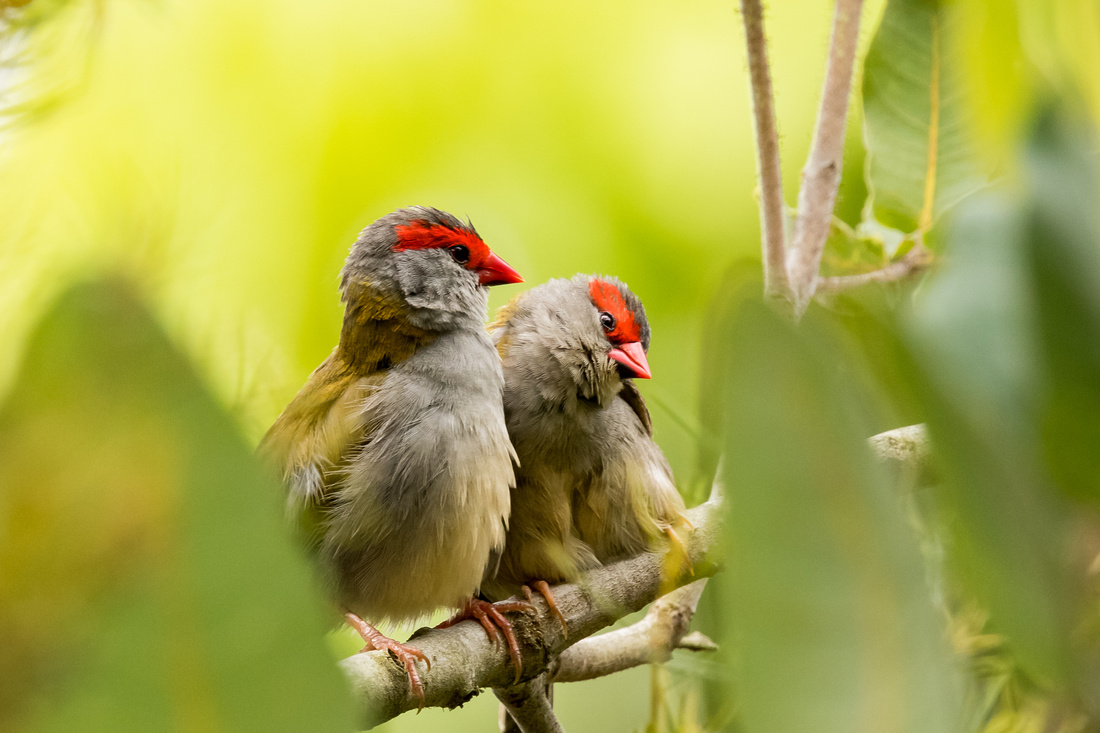 Another Eastern yellow Robin, this one in the connections garden and certainly giving it his all as he sings out. 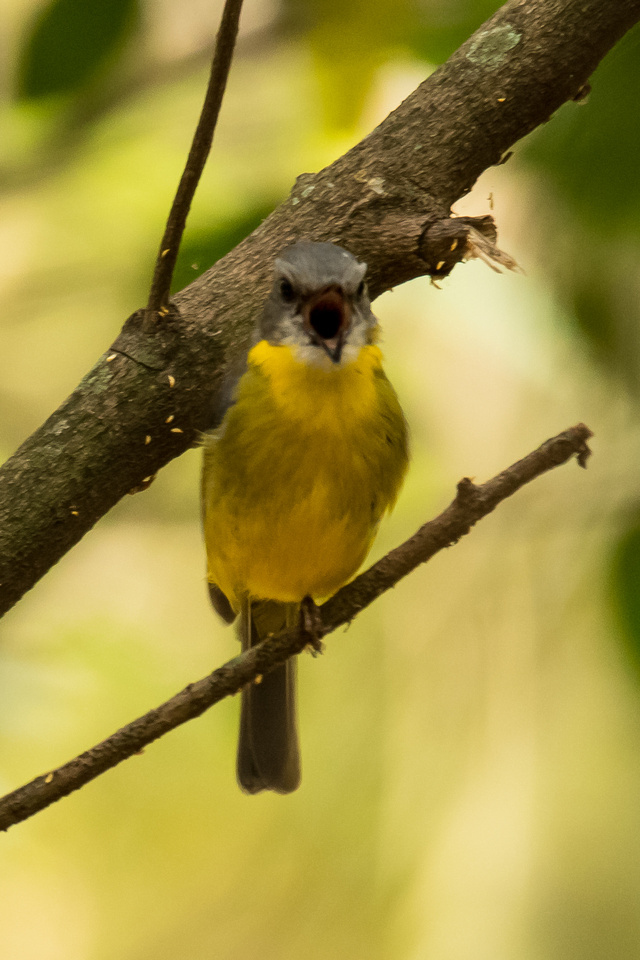 A Male Australian King Parrot (Alisterus scapularis) Was feeding on the wattle seeds as I started to made my way out of the connections gardens. 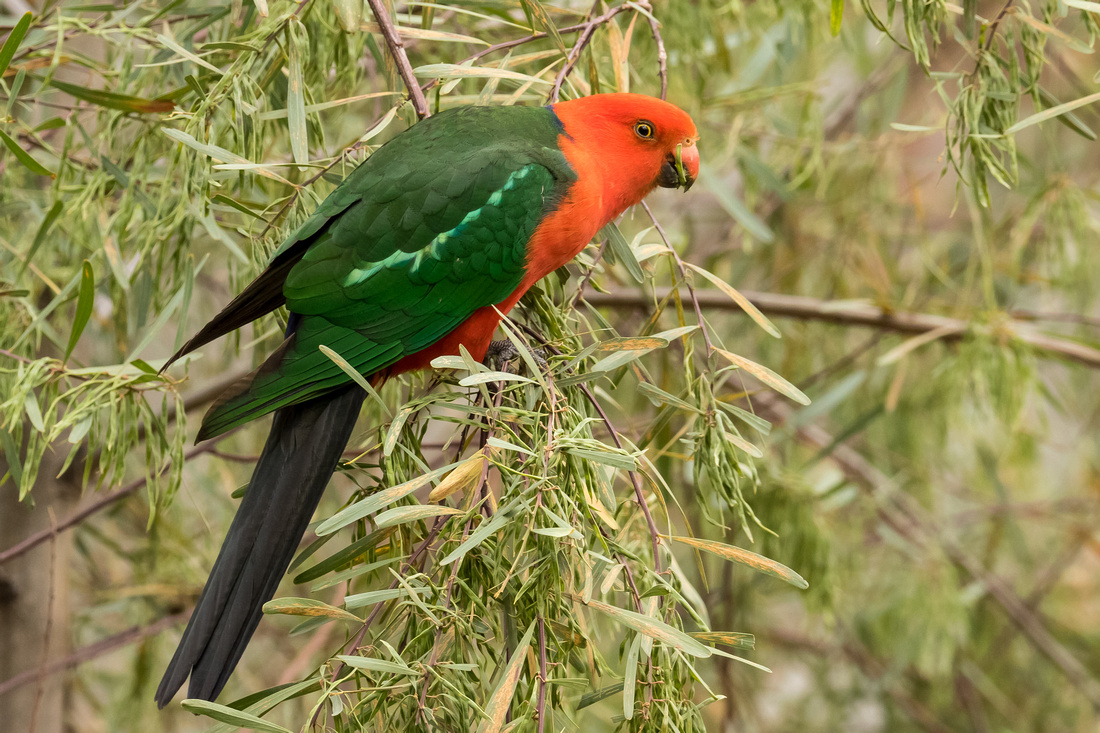 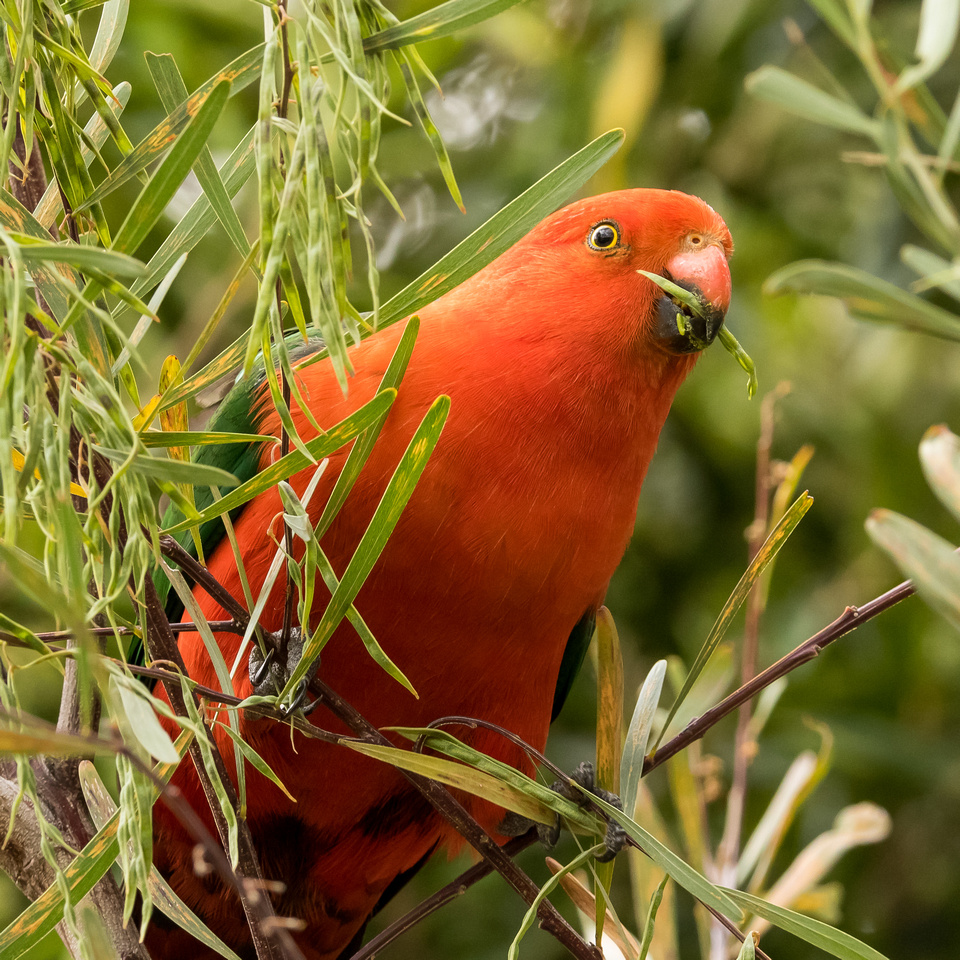 Next up a Noisy Miner (Manorina melancephala) was sitting there keeping a eye out. 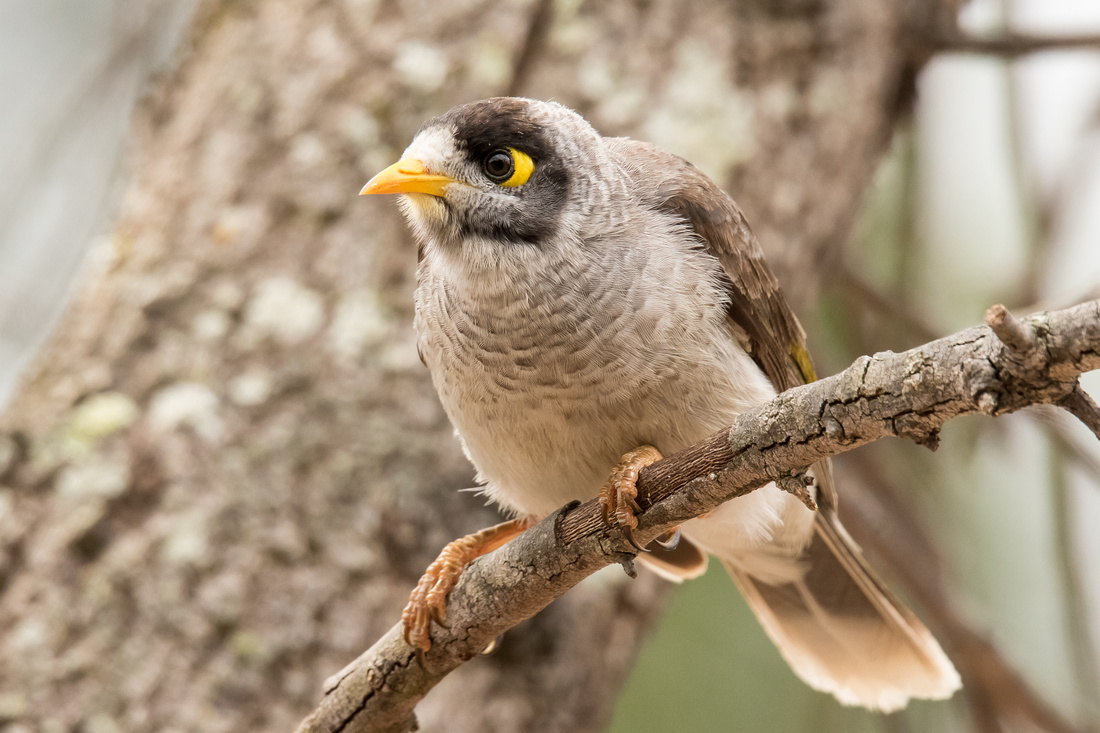 Next one I came across was this Satin Bowerbird (Pitlonorhynchus viloaceus) again keeping an eye out, seemed to be a lot of that this week.  The first of these is as per normal, the next two are after having  play again in Topaz Impressions to give it more of a painting style in the back ground. 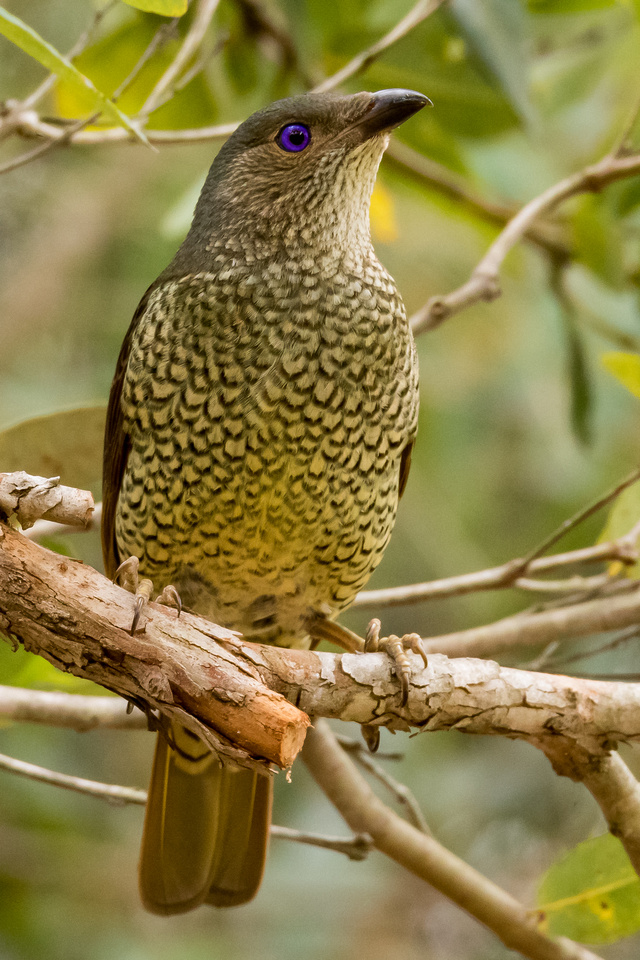 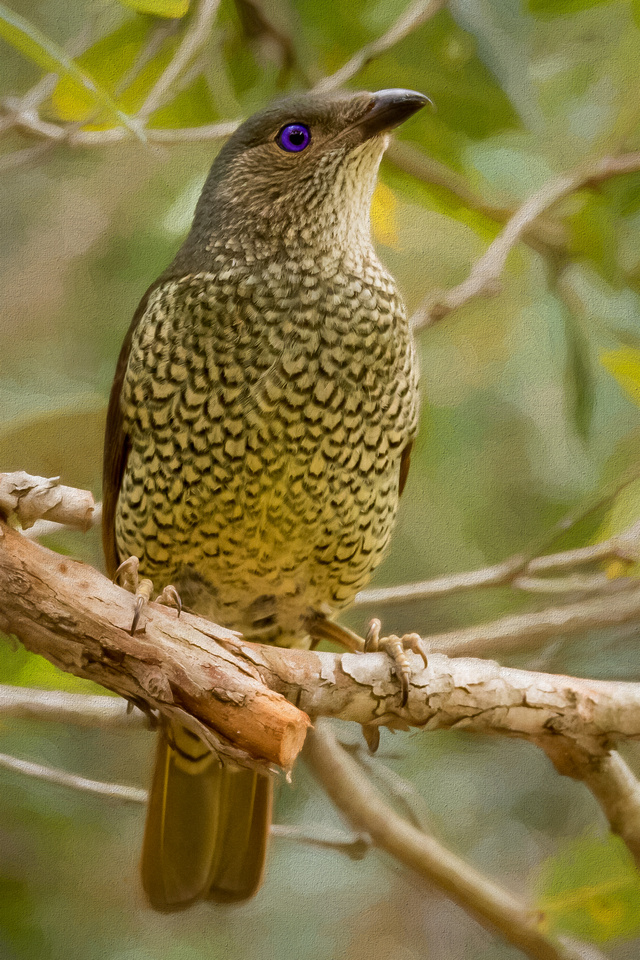 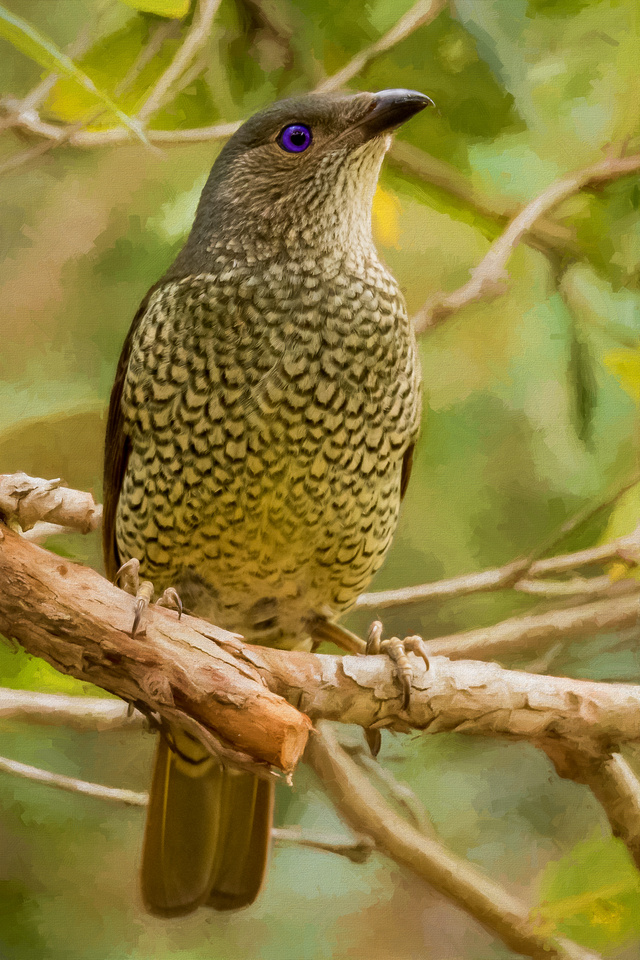 So thats it for this weeks shots a good variety of bird life this week in the gardens.

Thanks for dropping by my blog this week, I'll be back next week with more.